Looks good
Which DE are you using?
A

Plasma from ports, just removed default Breeze theme, replaced with it traditional Oxygen theme and pulled some wallpaper from Internet. Pretty much all there is to it.

Is it possible to see your conly configuration, please?
Thank you.

Thank you. I had a problem to shows all cpu cores. And it works now .

fernandel said:
Thank you. I had a problem to shows all cpu cores. And it works now .
Click to expand...

There is a issue with ZFS datasets. It does not display the inherited ones, and I didn't bothered to take a look on it yet. 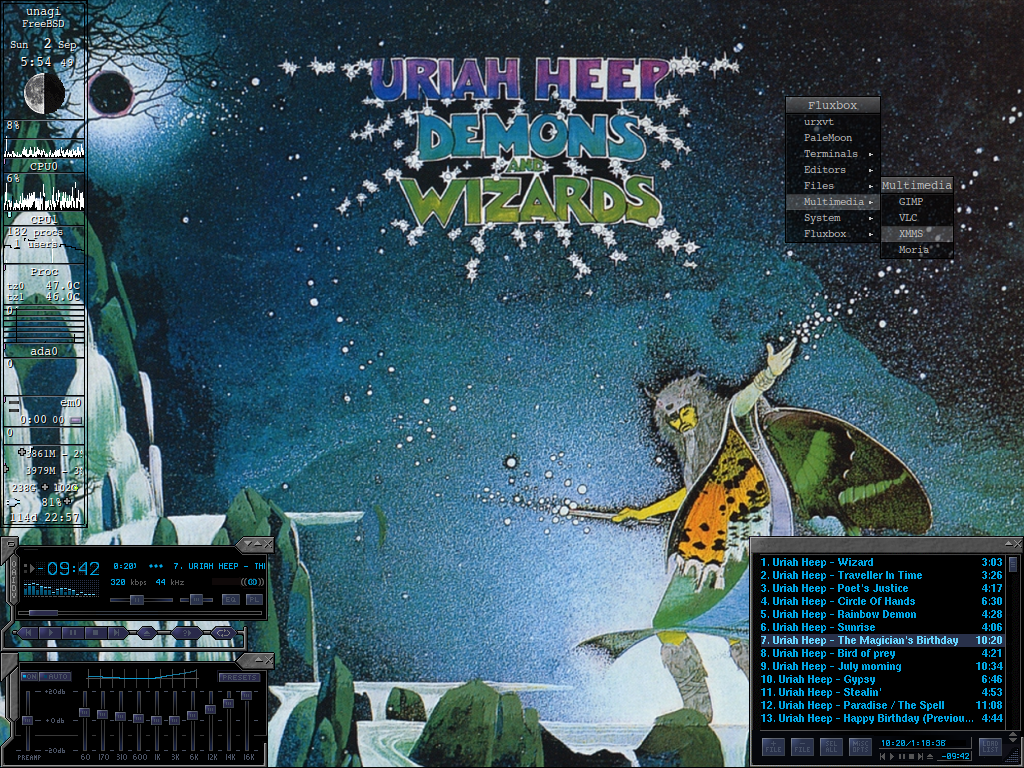 It never needs to go online, only play beautiful music for me as I relax and could not possibly be doing a better job at it, so I decided to leave well enough alone. Making it a dedicated .mp3 player was one of the better Ideas I've had in a while and it excells in that role.

It's the only one I change the wallpaper on anymore and I keep a music theme to it.
P 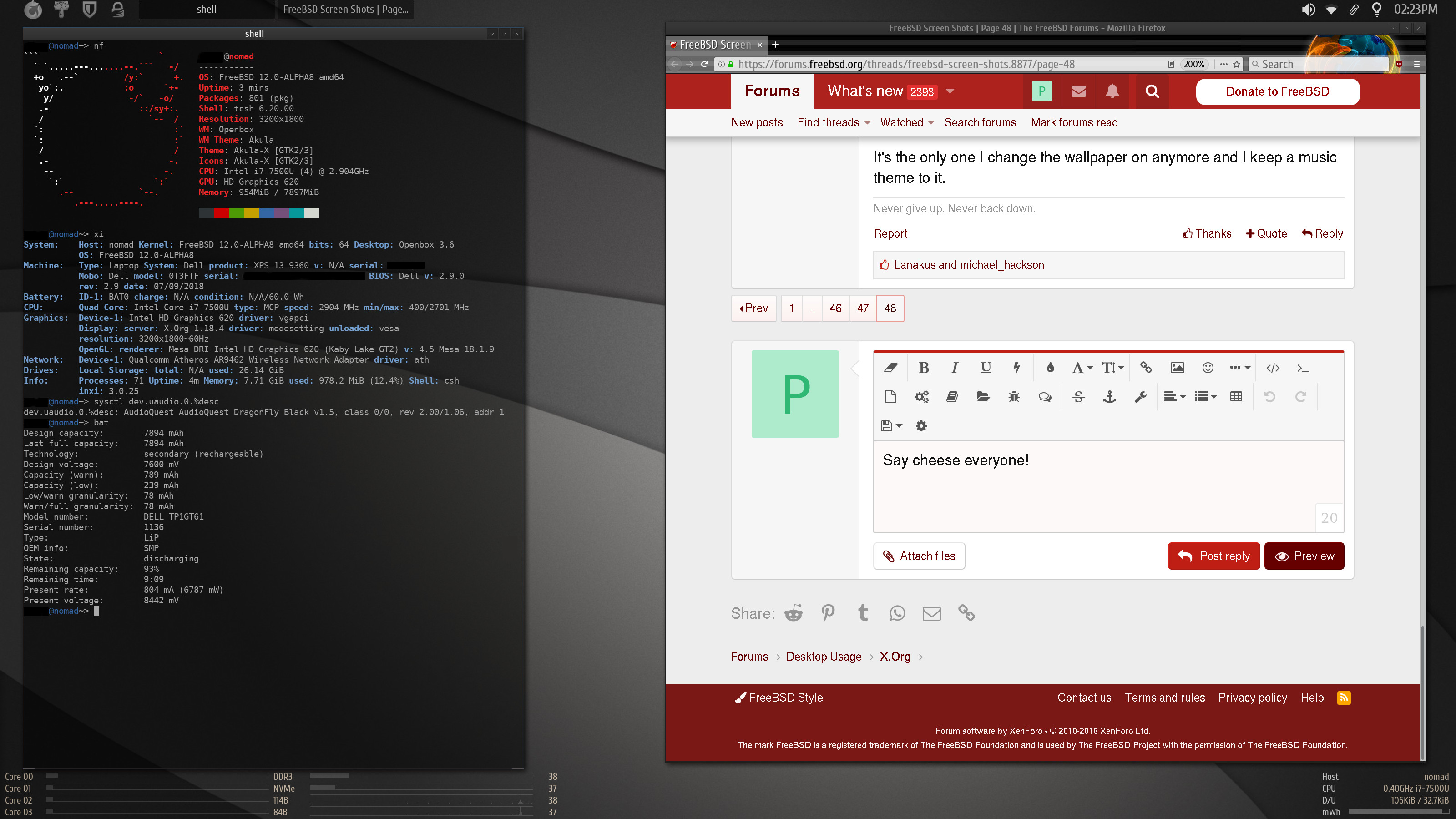 I really like that! Just a couple of questions though. a) What terminal are you using? b) Are you having any problems with FreeBSD and the XPS 13? I'm planning to get a more modern machine in the spring and I'm undecided between an XPS and something from Lenovo. 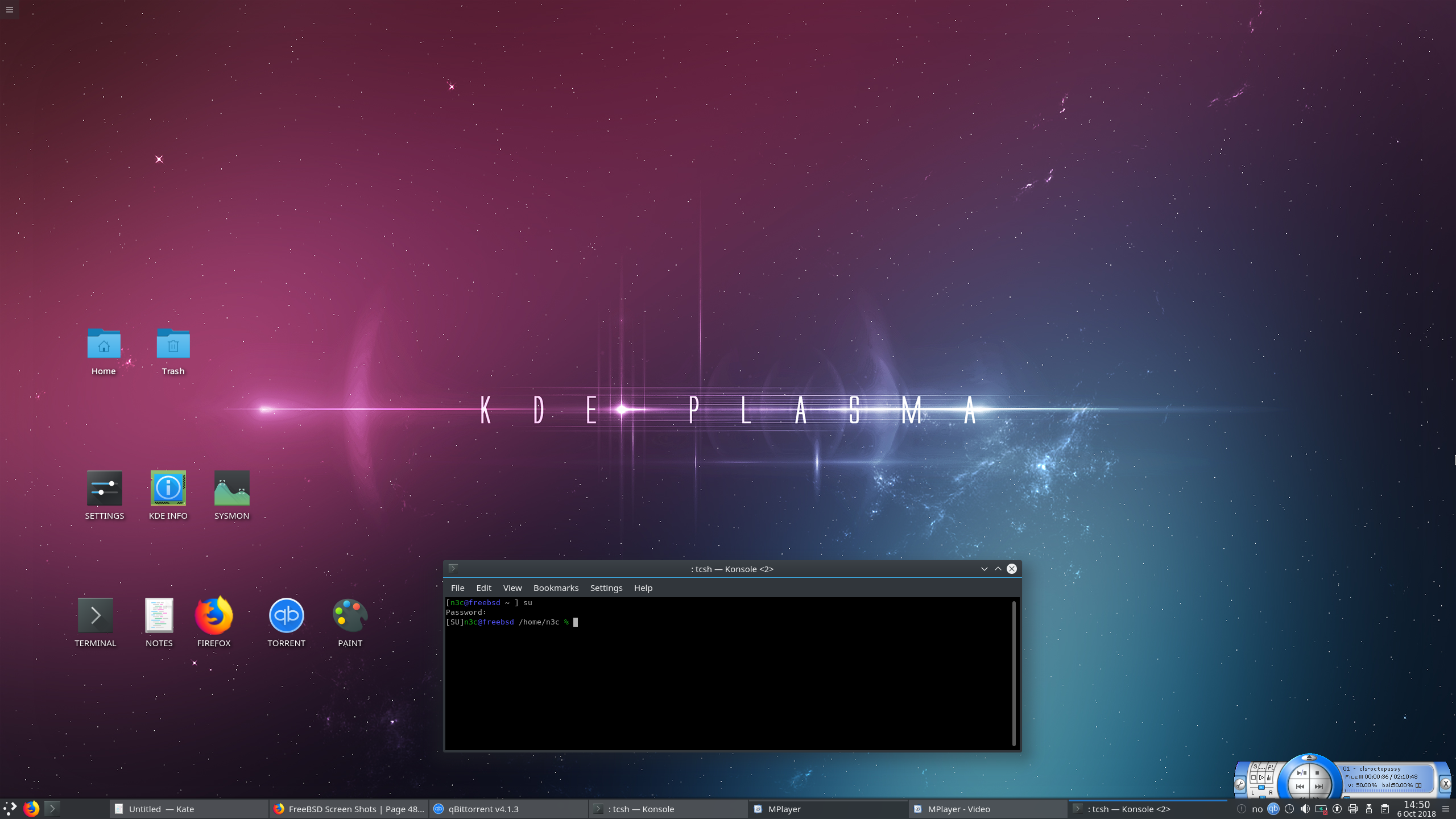 bse5150 said:
I really like that! Just a couple of questions though. a) What terminal are you using? b) Are you having any problems with FreeBSD and the XPS 13? I'm planning to get a more modern machine in the spring and I'm undecided between an XPS and something from Lenovo.
Click to expand...

B) No.
At least, nothing that bothers me. It is a touch-screen model (i7-7500U 8GB LPDDR3 256GB NVMe), but I switched that off in BIOS because it is a "feature" that I never use... and rumor has it they are very power hungry; which I've never bothered to verify myself because I easily get 6 to 8 hours between battery recharges. If true, I'd recommend ordering/buying one that is non-touch from the factory, for even more battery savings I also switched off the webcam, mic & Bluetooth in BIOS because I never use them & some lingering security paranoia in case intelligence agencies around the world still have sexually perverted employees on the payroll practicing clandestine voyeurism at tax-payers' expense. It possibly also serves to save a bit more battery power. The device I received had a "Killer Networking" M.2 WiFi card, which I immediately removed in favor of an Atheros QCNFA222 bought on eBay for $12 brand new (ironically the device I got from eBay is a Dell branded one even though Dell wouldn't/couldn't ship this laptop with the Atheros chip I wanted from the assembly line.), and now use the "Killer WiFi" card for target practice with an air rifle. A mildly skilled hamster could be trained to crack open this laptop and switch the cards, it is that easy. The USB Type-C socket works for charging the battery itself, charging a mobile phone, I got it to work for video-output too (some time ago...) and data transfer (you just need to wake the device up after plugging in a USB stick). I pretty much only use the port for charging the laptop as I hardly ever come across a USB memory stick with a Type-C plug. Bonus: I use the same power adapter to charge both my phone & laptop as they use the same Type-C connector; one less thing to carry around albeit the stock Dell power brick is tiny, the aftermarket one is even smaller...it takes the same amount of time to recharge the laptop with the OEM power adapter as with the aftermarket one (make sure it is at least a 45W, unit easily found on Amazon for $19.99) I use now to charge the laptop and phone. The SD-card slot is something I am tinkering with. I tested the OpenBSD rtsx driver and it works perfectly for them; am presently trying to re-learn hardware programming to see if I can port the OpenBSD driver over to our neck of the woods. Again no deal-breaker for me, and can also be switched off in BIOS... for perhaps some more power saving. I always use a micro-SD to USB Type-A adapter stick anyways for this as most desktops/laptops aren't delivered with an SD Card slot. In the meantime I keep a BaseQi micro-SD card adapter in there for aesthetics & dust/dirt mitigation, they make one specifically for the XPS laptops. The GPU works perfectly with graphics/drm-next-kmod and I don't even bother installing any of the xf86-video-<name> drivers at all. The touchpad works flawlessly with the default Synaptics settings. Add "hw.psm.synaptics_support="1" " to loader.conf to fully enable all the touchpad features and while you are at it "hw.pci.do_power_nodriver=3" for potentially some more power saving.
The keyboard FN buttons (enabled in BIOS) all do what they say they should do, no need to kldload acpi_video.ko or whatever, only the mute button needed an xmodmap entry and you can modify all these buttons to whatever else you want them to do too with xmodmap. The FN F7 button has that marvelous "switch all the lights off instantly" feature, switches off all LEDs and the display for insta-darkness and works straight out of the box.
The screen is super sharp and very bright. In fact I use graphics/intel-backlight reduced to 20% output by default, as I find anything above 60% much too bright for my eyes. The "infinity-edge" screen really is the best one out there in my opinion, and has the thinnest bezel that I'm aware of. I suspect it will take decades of serious abuse before the hinge ever even becomes slightly faulty.
I booted, installed and run FreeBSD without any issues in UEFI mode, no need for any CSM shenanigans.
sysutils/powerdxx is your friend, install it immediately.

#1 Beware of Lenovo, they occasionally release things to consumer markets that can annoy. I'm unsure about the current state of affairs, perhaps someone on this forum can give some better insight, but they've used the so-called "whitelists" with their hardware...which are a royal PITA. I had a Lenovo Yoga 2 Pro, which had a whitelist that prevented me from switching WiFi cards back in the day when FreeBSD's Intel 7000-series drivers weren't up to snuff. I imagine the current X1 & Yoga 900's might employ this whitelist nonsense. The result is if you don't have an approved card installed, the laptop will be prevented from booting. Again, do some snooping around and find out if Lenovo still do this or do it to the laptop you're intending to acquire.

#2 Beware of the CPU & the integrated GPU feature(s). Mine is an i7-7500U Kaby Lake chip which launched 2 years ago, come Spring time whatever cutting edge CPU/GPU is integrated into Dell / Lenovo laptops might possibly not be 100% supported by graphics/drm-next-kmod yet. Do a bit of stalking online on the FreeBSD Graphics lists and dare-I-say-it Linux fora for anyone mentioning GPU support issues with the latest-greatest offerings. 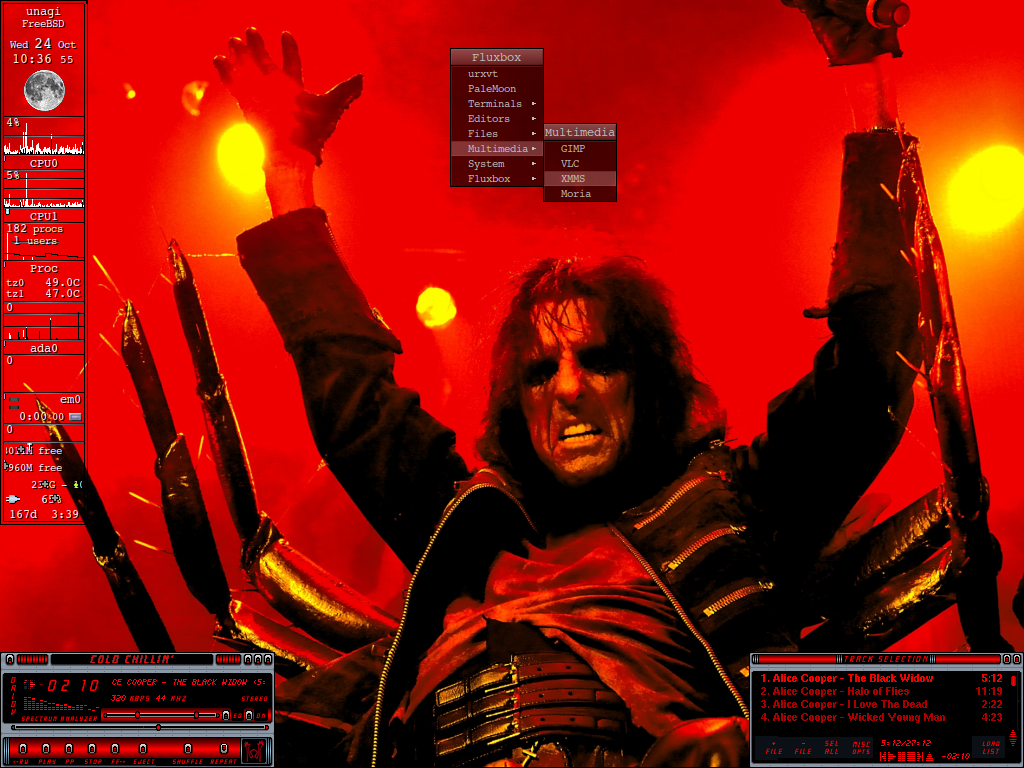 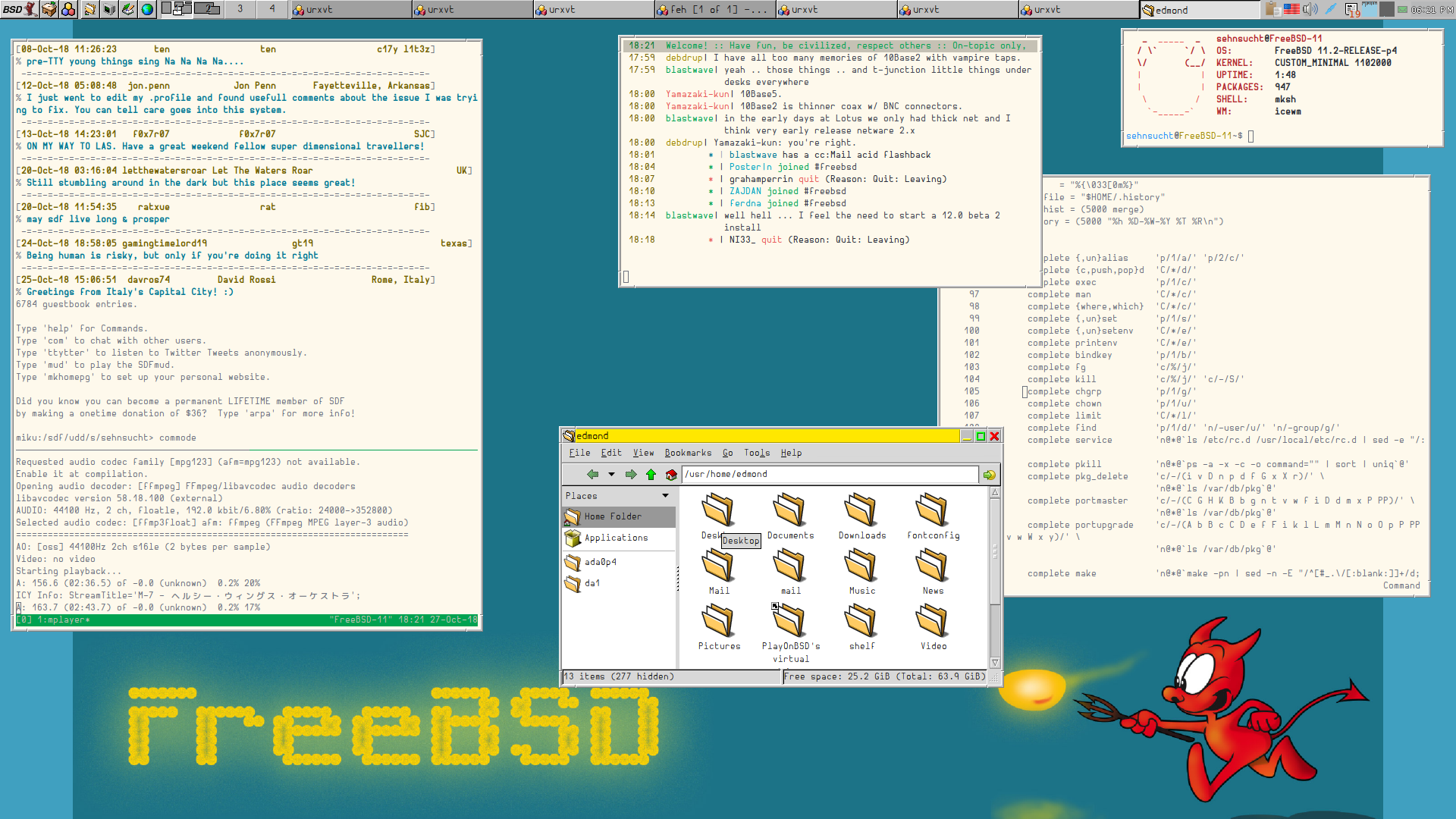 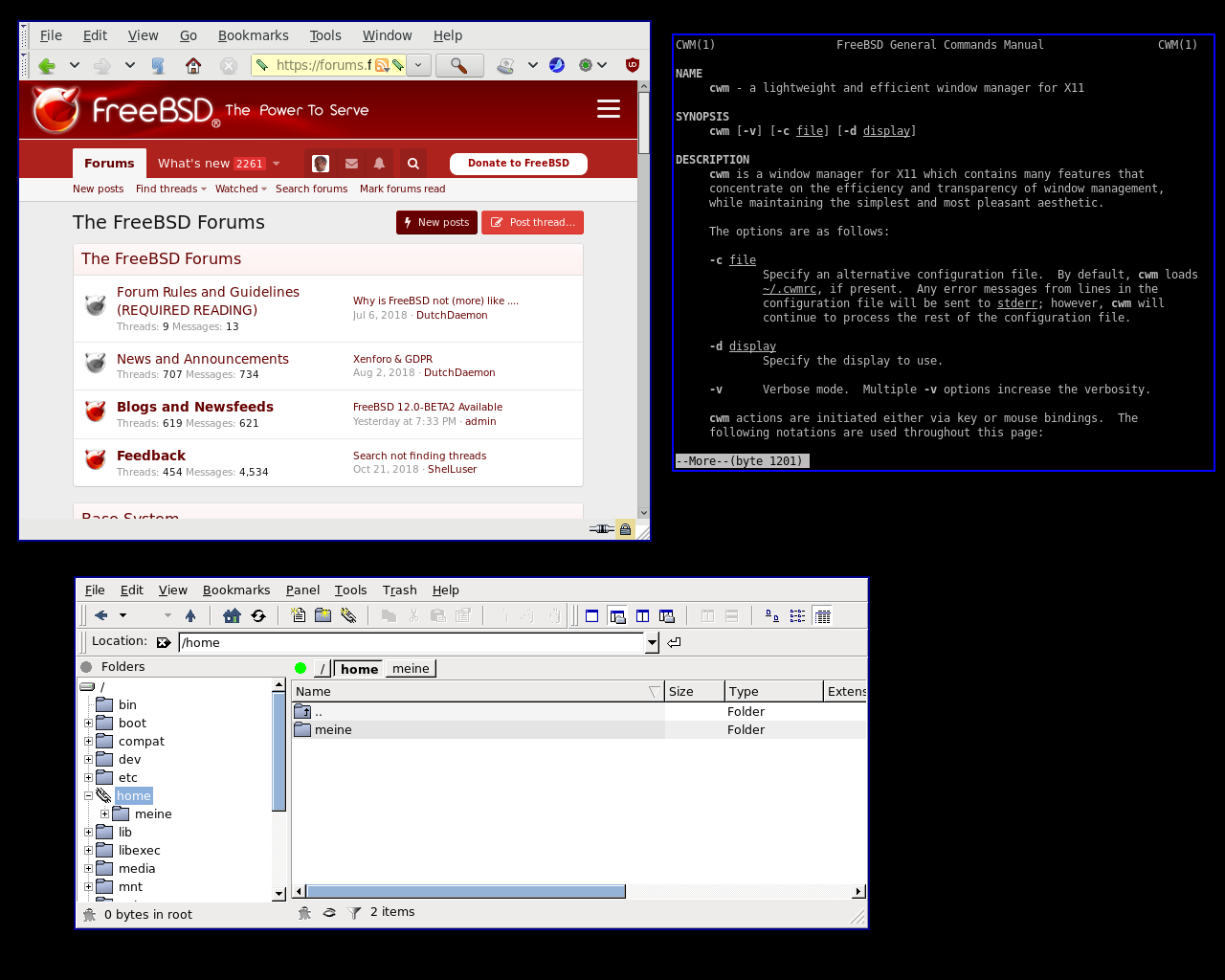 my i3 wip on this dusty laptop 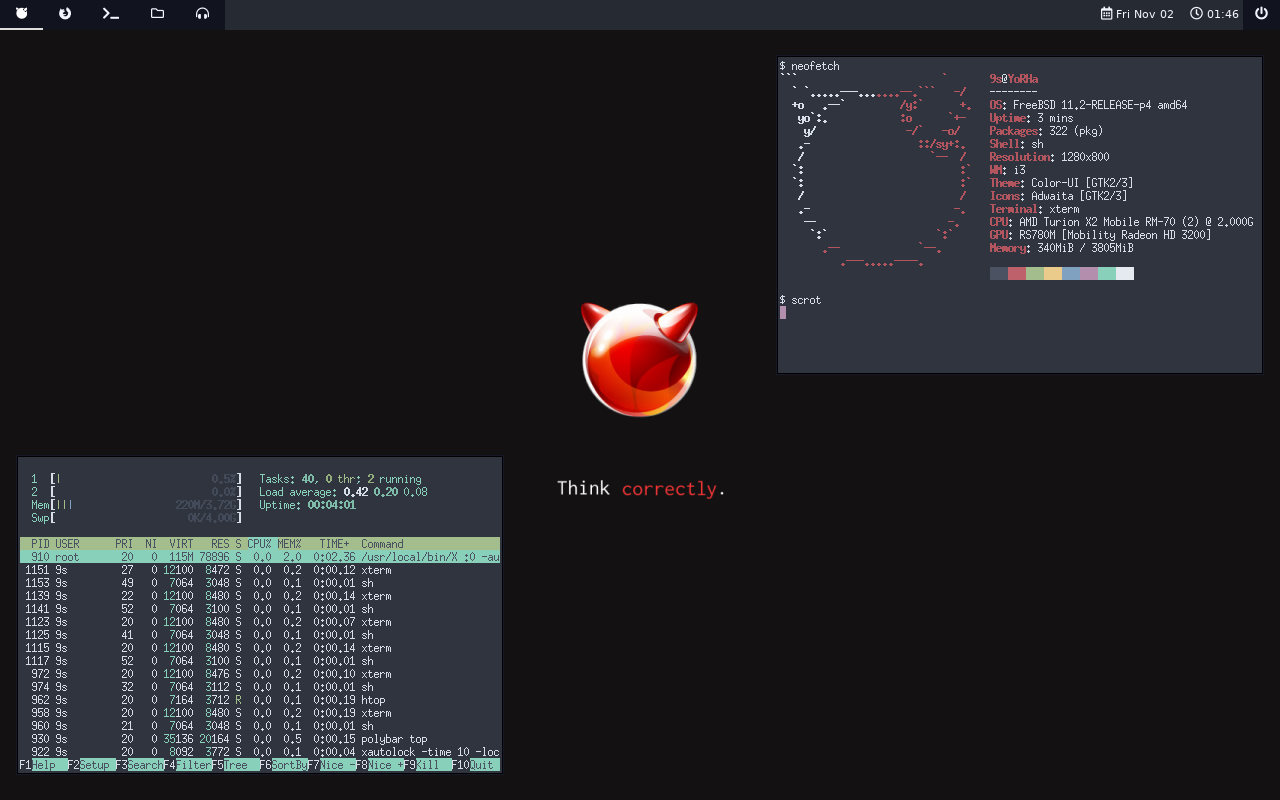 So Windows crashed on me. Well, specifically, a HD crashed on me and I discovered that dynamic disks (required for software RAID under Windows) aren't as accessible as I thought they were. Fortunately for me I prepared for this even without knowing it by keeping (and maintaining) a KDE desktop on my Dell server. It's not the fastest, but it gets the job done until I replace my entire machine later this year (it was a Win7 pro 32bit machine, 10+ years old? Could run Minecraft somewhat and that's it).

I'm a huge fan of the NetBeans Java IDE and decided to grab the source, build it and see where that would lead me. And here ya go I think the new logo isn't all too bad.

Moving from Windows 7 to KDE (4) is definitely a bit of a culture shock but fortunately for me software such as KDE, NetBeans and LibreOffice really help to keep me going 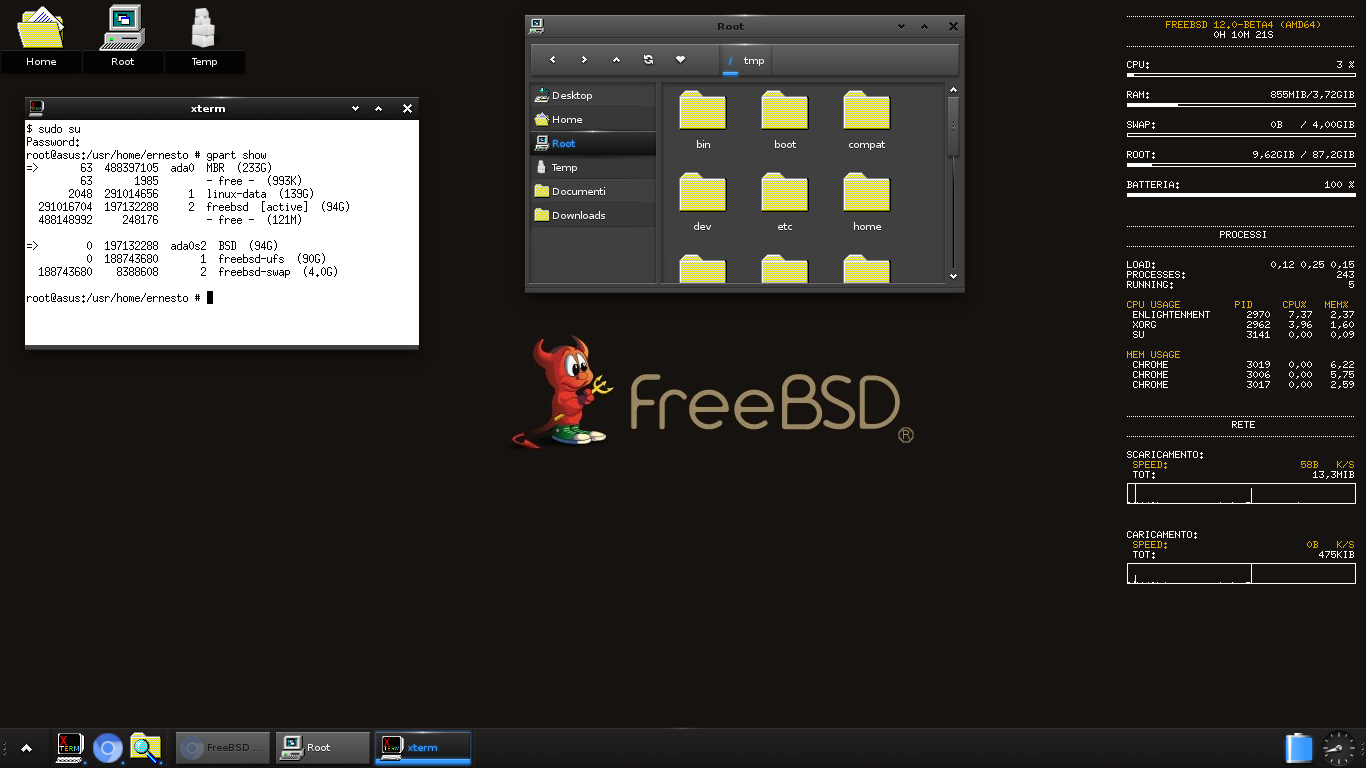 Stuck in the 90s. WindowMaker, urxvt, font is ohsnap, bunch of display hacked dockapps; two of which are running in linux compat mode. 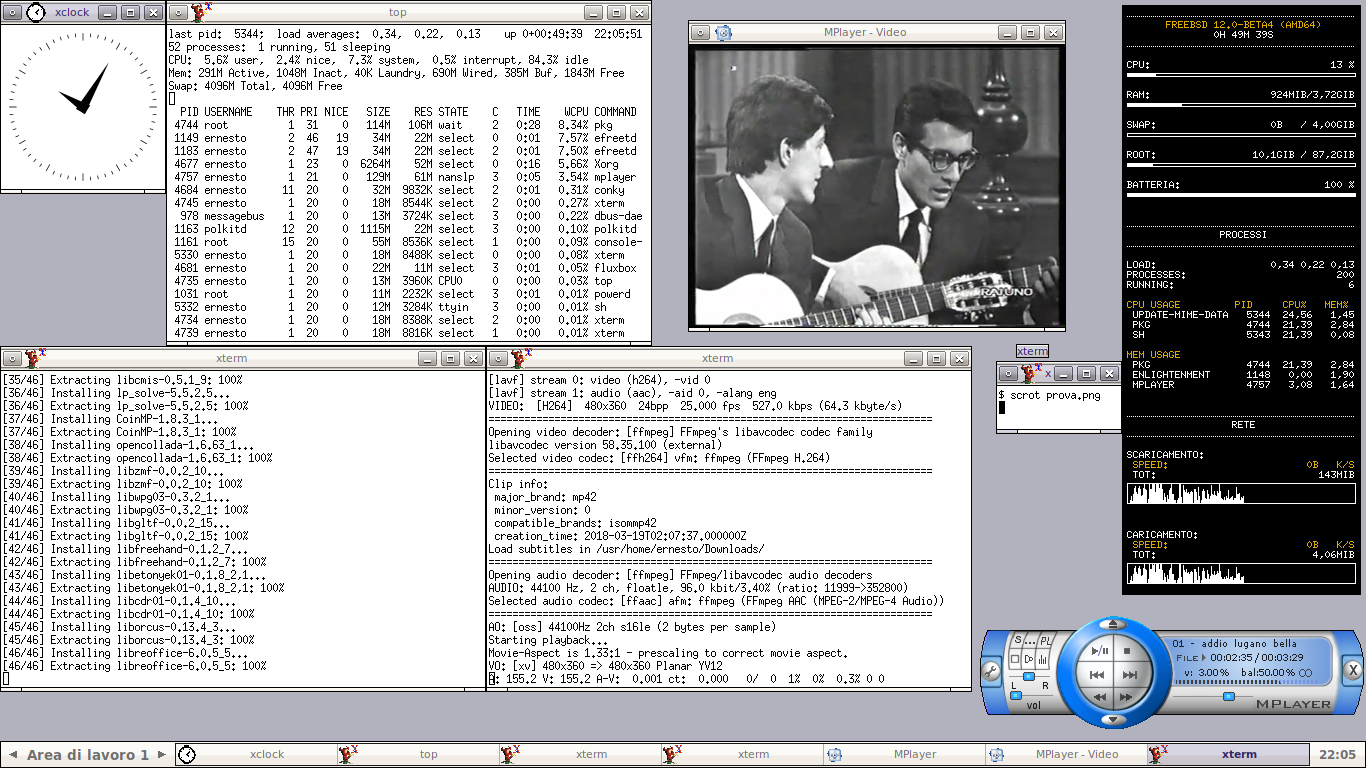 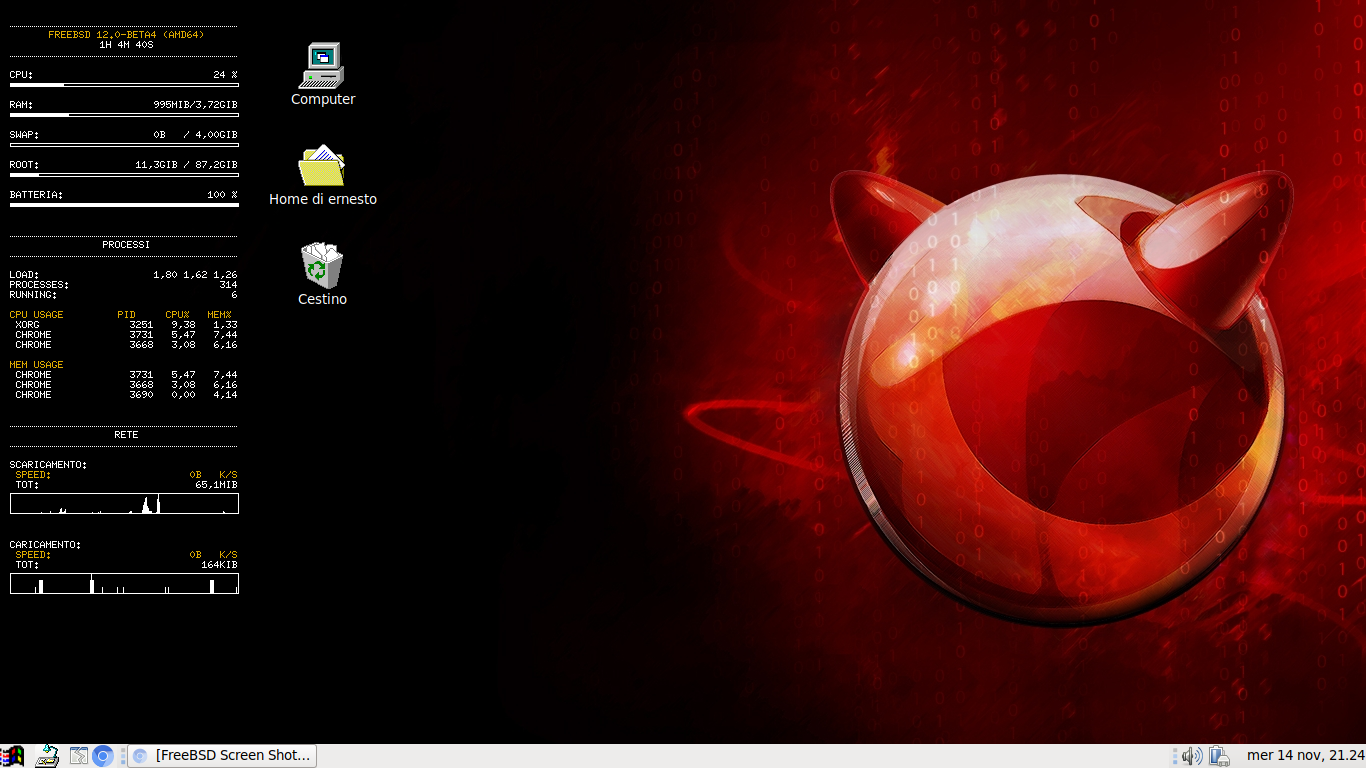 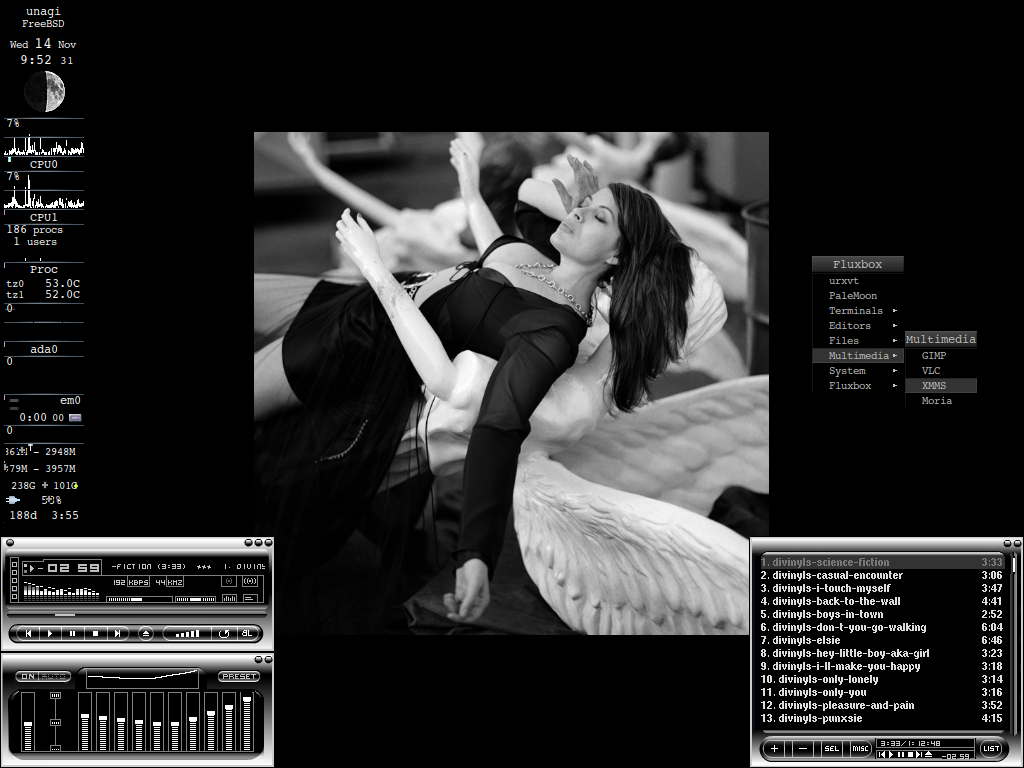 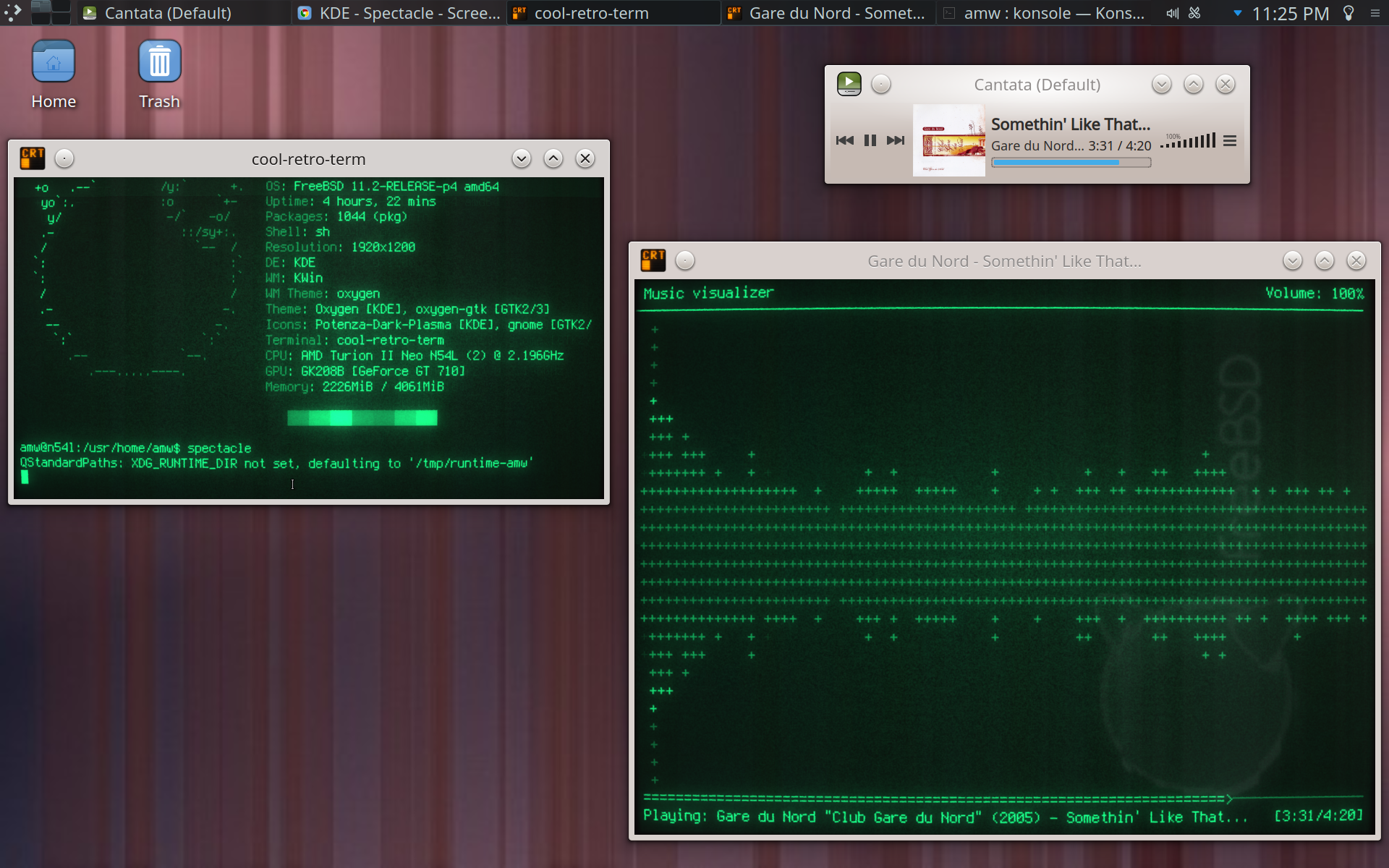 Have been playing with DE's and WM,'s for years and never found one I just loved and stuck with. I wanted something light, not because of lack of resources, but because I have more control (?) I honestly have no idea but it appeals to me so there...I found x11-wm/cwm the other day and I must admit I am in love. Simple, fast, easy to configure. Why have I not used this before?