BSDAppentic3 said:
You right. Then DE comes to be some like Gnome, KDE, Xfce, etc?
Click to expand...

Yes, DE stands for Desktop Environment, what means those include almost all (or at least the basic ones) necessary tools for a Desktop, including a WM.

When you use a WM, all other tools (if any) are up to you to select what are best. Or a minimalist approach.
B

lebarondemerde
Right.
I just installed flwm, but I can't launch it.
Any idea?

lebarondemerde said:
No, but you can always flwm(1).
Click to expand...

And I was complaining about i3...
God.
Edit: At least, I think that it don't consumes a lot of my RAM nor the processor. Thus, I can use more programs without the problems of consumption of my equipment.

I'll try to launch it.
The problem that I had with i3 wasn't with the process of installation, but was with launching it.

echo "exec i3" > .xinitrc (or .xsession depending on what you are using).

Or the problem was the one (also in that post) with i3 not creating the default configuration? Workaround also is in there.
S

BSDAppentic3 said:
You right. Then DE comes to be some like Gnome, KDE, Xfce, etc?
Click to expand...

Exactly; and yes, my screenshot runs x11-wm/flwm, which is a stacking wm.

Like lebarondeberde suggested, awesome requires some basic programming competence in lua, and this is quite the common things in many popular tiling wms: x11-wm/dwm implies C scripting, x11-wm/hs-xmonad implies haskell, x11-wm/qtile python, x11-wm/stumpwm common lisp, etc.... x11-wm/i3 is probably the most used tiling wm among Unix-like systems users, being very featured, easy to configure (confs are written in plane text), well documented, with a large userbase, which also turns in tons of confs file already available to be "stolen" online. x11-wm/herbsluftwm and x11-wm/bspwm are other popular and easy to use ones.

Personally I think that for standard everyday desktop usage stacking wms are better. I mean, if you're into developing and need to optimize display space, and minimize time spent rearranging windows, then a tiling is a good choice, but hell, we're in 2018 and mouse/point&click where seen as an enormous achievement back in '80s when Xerox first introduced it

User-friendly, well supported and featured stacking (floating windows, with mouse resize/move/minimize capabilities) wms are x11-wm/fluxbox, x11-wm/openbox, x11-wm/pekwm, x11-wm/icewm, x11-wm/compiz, x11-wm/jwm. Openbox is probably the most popular, migth reuiqre some competence in writing xml files, but way too many examples are already available online, and a GUI frontend to configure it, x11-wm/obconf is already available. I'd suggest you to look into x11-wm/icewm, since it's a very good one (looks a little bit vintage, with a motif/win9.x like interface), and has a GUI configuration tool too, icewmconf. JWM is probably the most powerful, see Puppy-Linux, which uses it as default: I've been a lot on JWM in the past, it's very good, but also harder to learn and configure than the above-mentioned ones. x11-wm/fvwm2 is definitely the most powerful, I've used it on DragonflyBSD and Linux after ILUXA published a couple of screenshots on it, but it is probably also the hardest to learn, and make look nice

On NetBSD, I currently use 2bwm, which is though not available among FreeBSD ports yet.

In future, you may also consider moving to a more barebone stacking wm: x11-wm/flwm is a good one, but OpenBSD's x11-wm/cwm is IMHO definitely the best for that purpose. CWM is the one I used until recently on NetBSD, and still use it on Linux, very convenient, stable and neat.

Some wms provide a bar on their own (i3, icewm, fluxbox, jwm), some others don't, so you may consider adding to them a lonestanding one, see:

- x11/lemonbar (most lightweight, hardest to configure)*

- x11/polybar (most powerful and featured, easier to configure)*

*From my point of view

Glad you finally decided to second our suggestions
S

BSDAppentic3 said:
And I was complaining about i3...
God.
Edit: At least, I think that it don't consumes a lot of my RAM nor the processor. Thus, I can use more programs without the problems of consumption of my equipment.
Click to expand...

flwm, like dwm, requires you to clone the sources from github, efit the config.h and recompile it in order to make any customization, even though the default one is quite good already, and you can customize titlebars, cursor and menu background/foreground like explained in the man page. However personally I'd avoid it as first wm, being it so minimalist 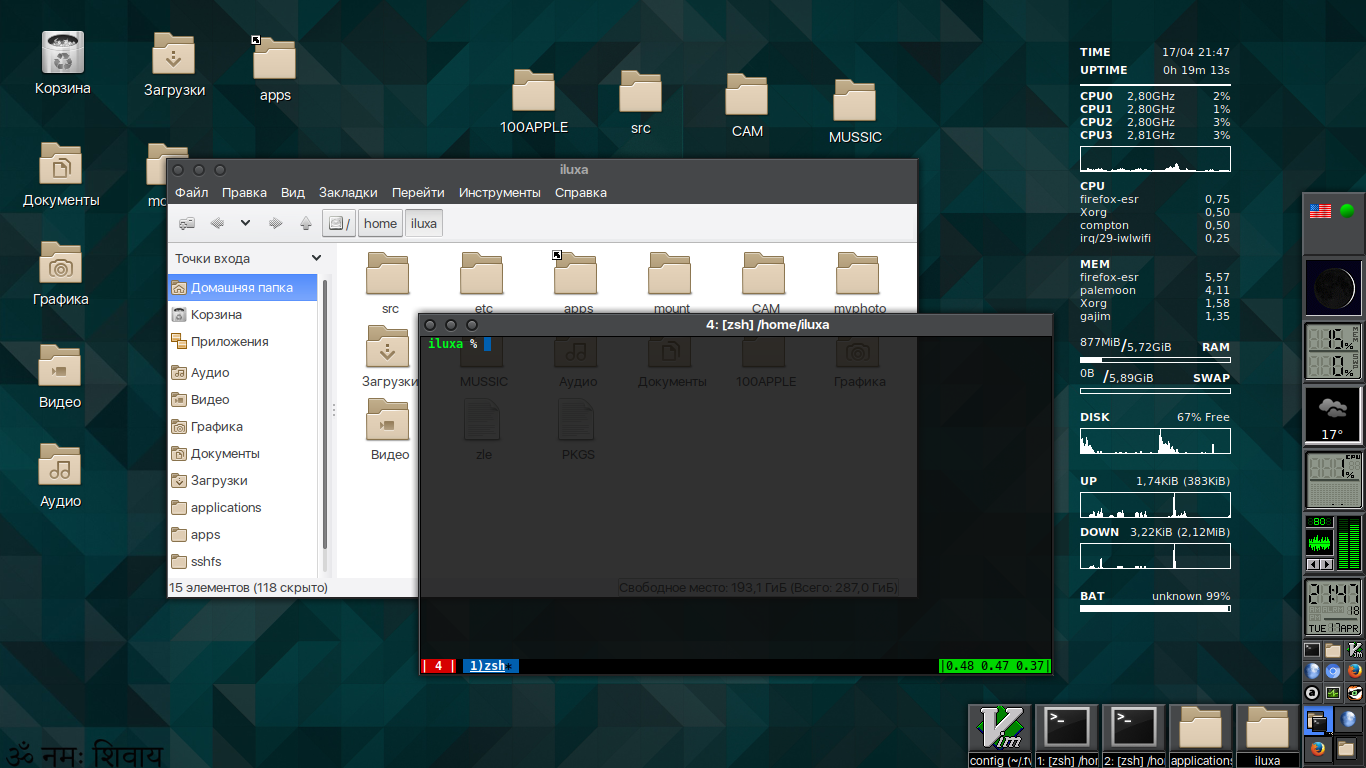 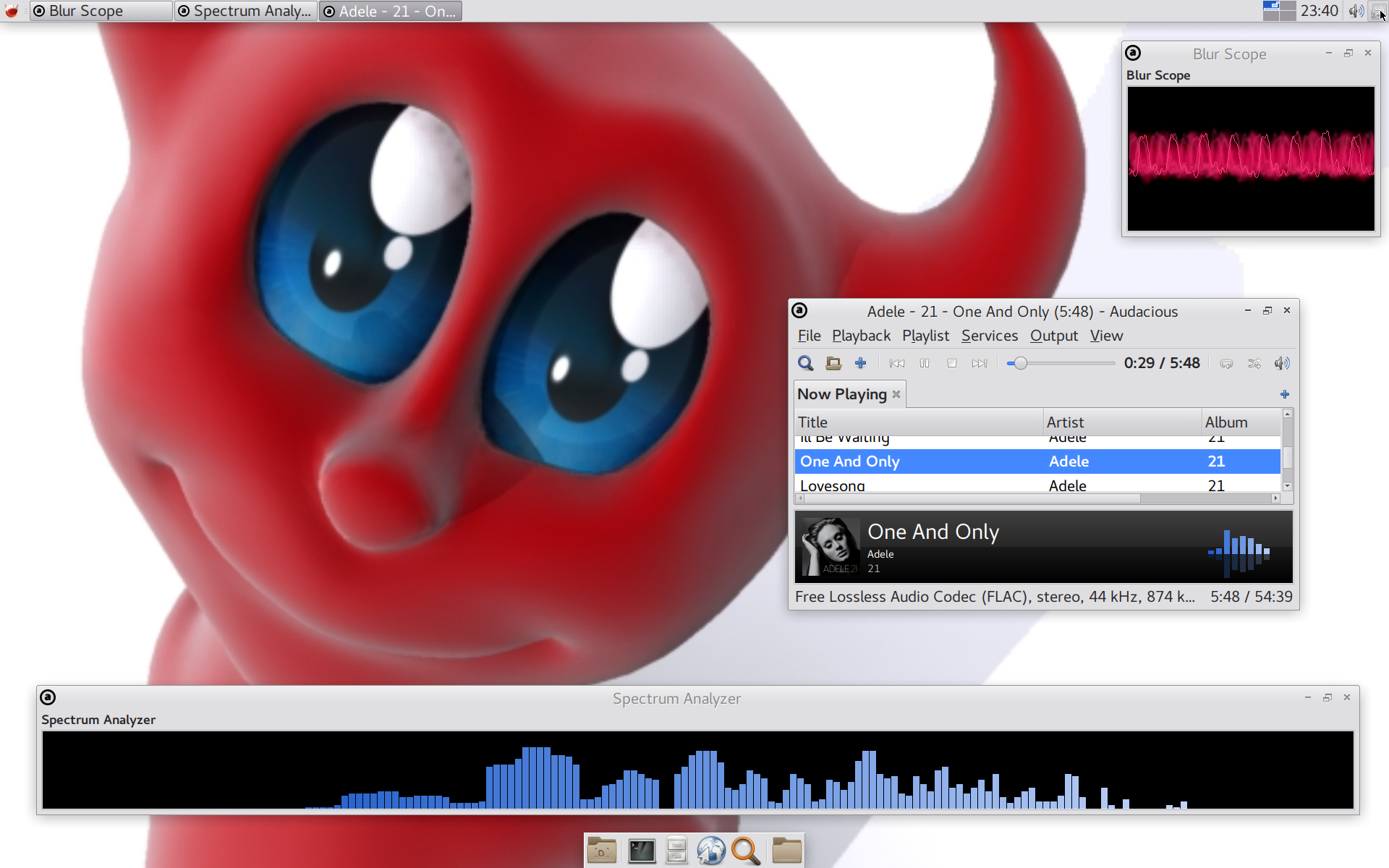 Sensucht94 said:
Glad you finally decided to second our suggestions
Click to expand...

I can be stubborn sometimes but sometimes I pay attention to everything.
Sorry, I don't have a capture of none of my desktops
I still fight to personalize 'em.

I realize all my desktops look the same and if you've seen one you've basically seen them all, but you have to admit this is a different look for me. 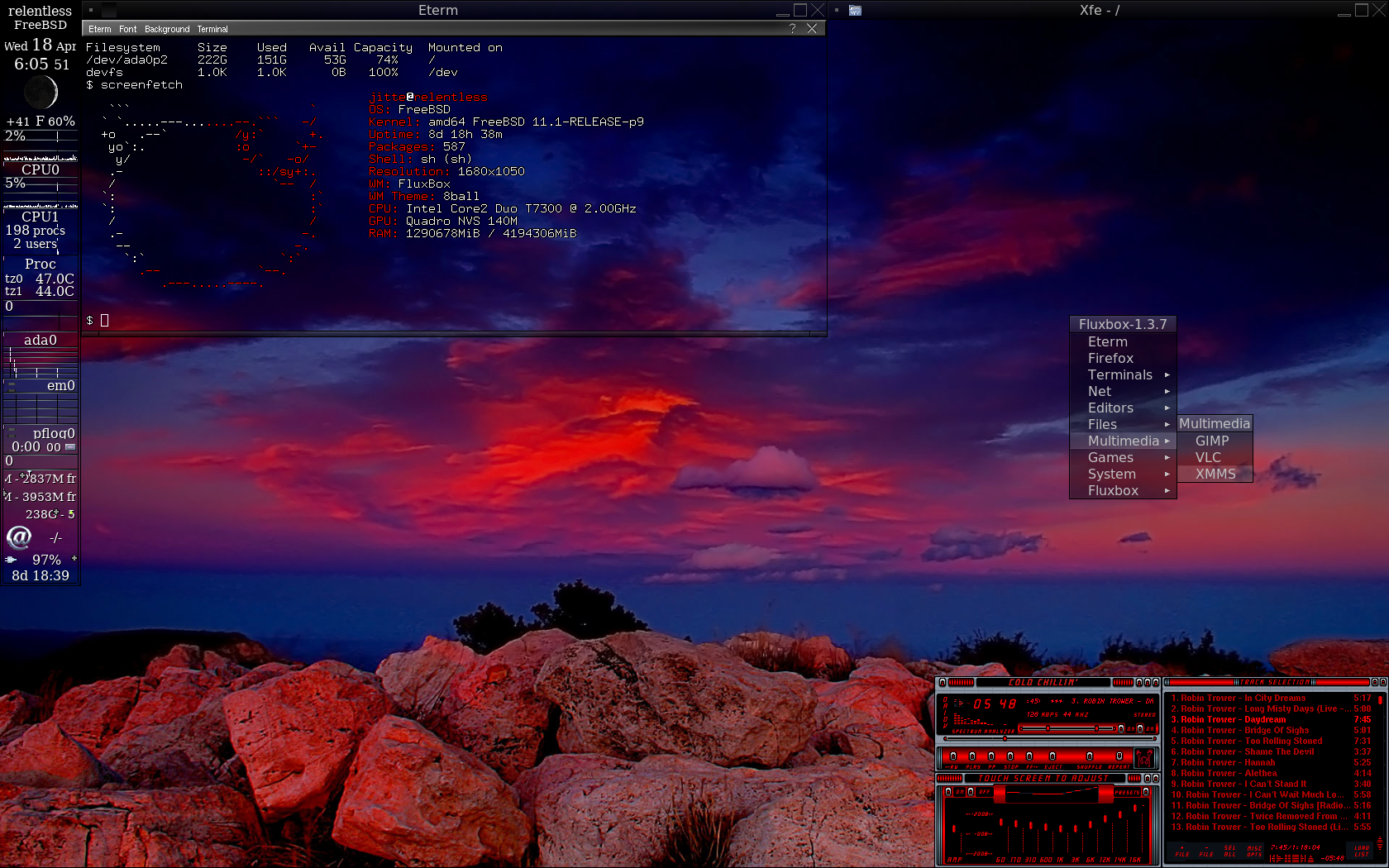 One of the new wallpapers I uploaded today.

I could show a shot with 18-20 images open in graphics/gimp, as many instances of editors/leafpad and a browser in addition to what's shown, but it's all the same. It all just works like it should.

And you wouldn't be able to see the wallpaper.
T

This is XFCE, right? Did you do any customizations (themes, fonts, etc)? Any special font seetings? Would be nice to know.

This is XFCE, right? Did you do any customizations (themes, fonts, etc)? Any special font seetings? Would be nice to know.
Click to expand...

Still trying to figure out fonts (disabled the bitmap fonts in /usr/local/etc/fonts/conf.d/70-no-bitmaps.conf and experimenting with .fonts.conf or fonts.conf in different locations. The information within this forum is slightly different from what I found from my Linux experience (for what it is worth).

The font used is 'Cantarell' which is available as a pkg (I only use pkg, althoug I think there are more fonts available in the ports).

The wallpapers are just googled or from deviantart.

One of the reasons to try FreeBSD was to minimize distro/desktop hopping, but the beastie logo is inspiring... 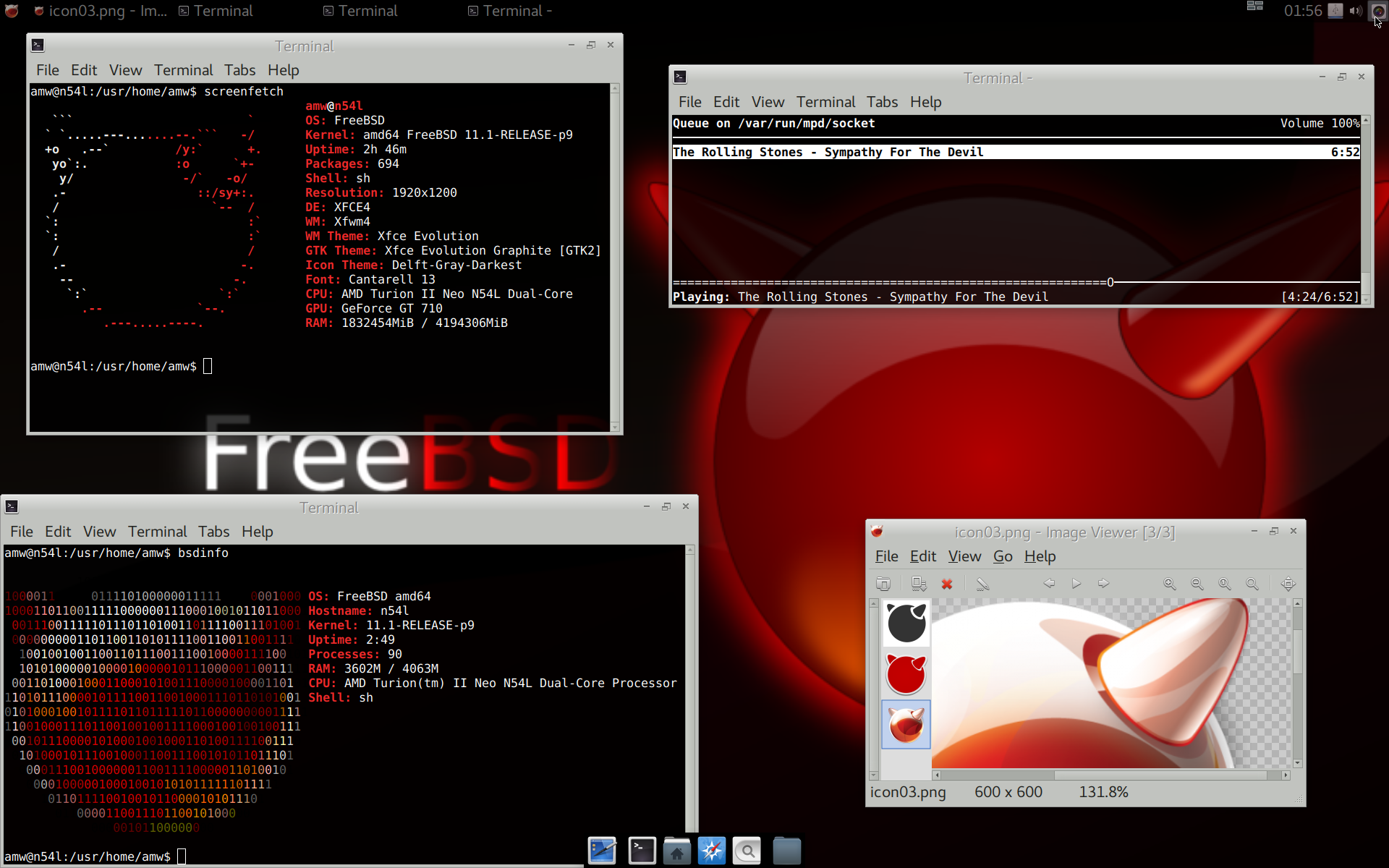 Hope this helps a bit.

I want to install KDE Plasma 5 here.
My question is: should I even try to do it? I read that it isn't in the ports. There's available from unofficial sources.
Should I try? 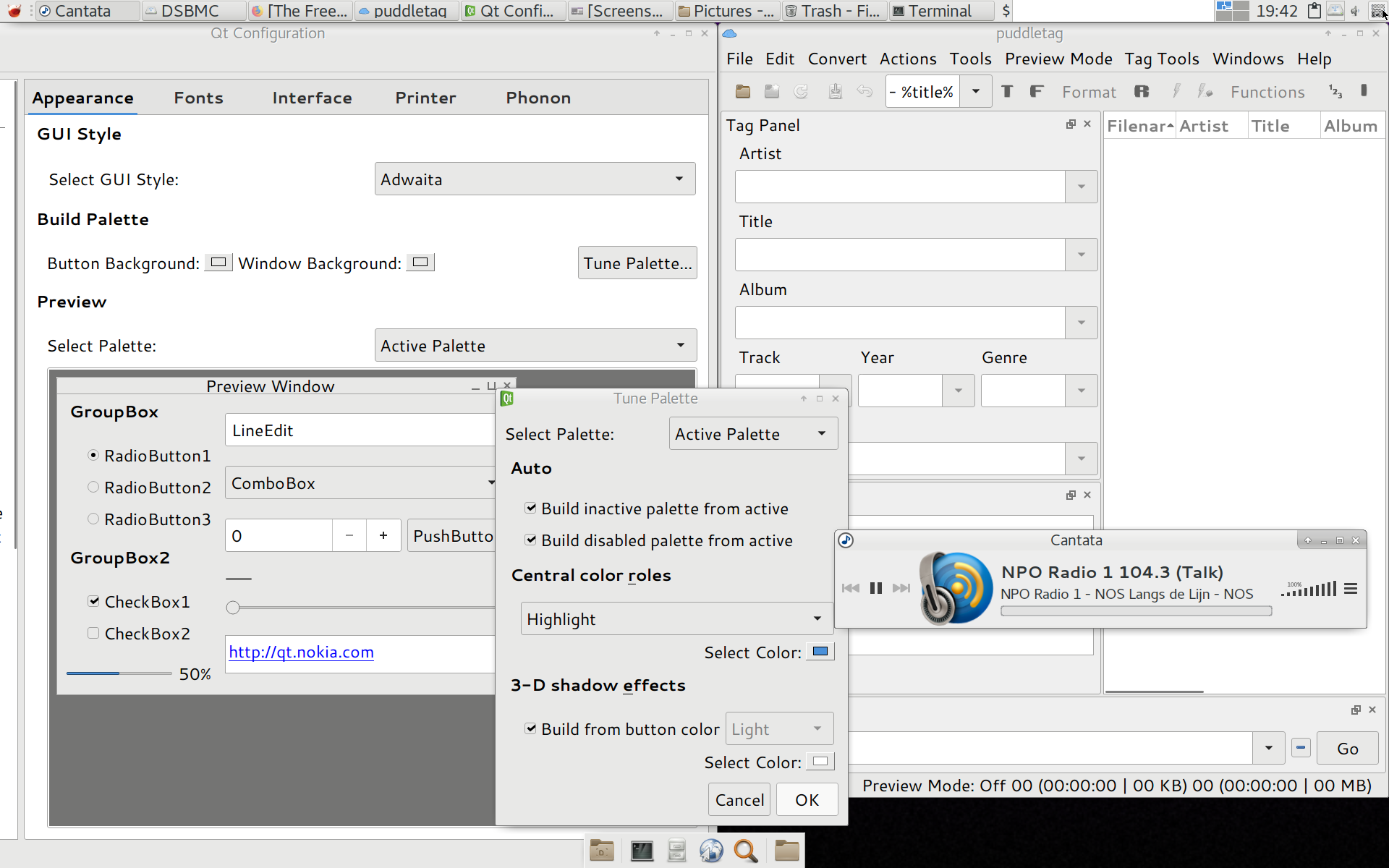 Switched to x11/rxvt-unicode for a terminal and a courier font for a more consistent system-wide look. Here are both my T61's running FreeBSD11.1-RELEASE-p9:

Trihexagonal said:
Switched to x11/rxvt-unicode for a terminal and a courier font for a more consistent system-wide look.

Welcome to the rxvt-unicode crew PM me if you want some tip with .Xresources

I suggest you try x11-fonts/terminus-font, which is similar to courier,but in my opinion better

x11-fonts/fontconfig is your friend if you're picky with font rendering/antialiasing; personally I don't care

I use it on OpenIndiana and after looking at the x11-wm/fluxbox shots BSDAppentic3 provided decided it was time to do something with mine.

I got an .Xdefaults file off the net and modified it. It has the option for terminus fonts but I went with courier so I could get it system-wide. I just fiddled around with it overnight and will probably work with it more.

Trihexagonal said:
I got an .Xdefaults file off the net and modified it.
Click to expand...

It is good idea to add
Code:
to ~/.Xdefaults. Then add xrdb -merge ~/.Xdefaults to your X session startup script.
This emulates usage of such tools like mate-settings-daemon ot gnome-settings-daemon.
The fonts of all your Qt, GTK and others applications will be always resized to 96dpi and will be nicer. 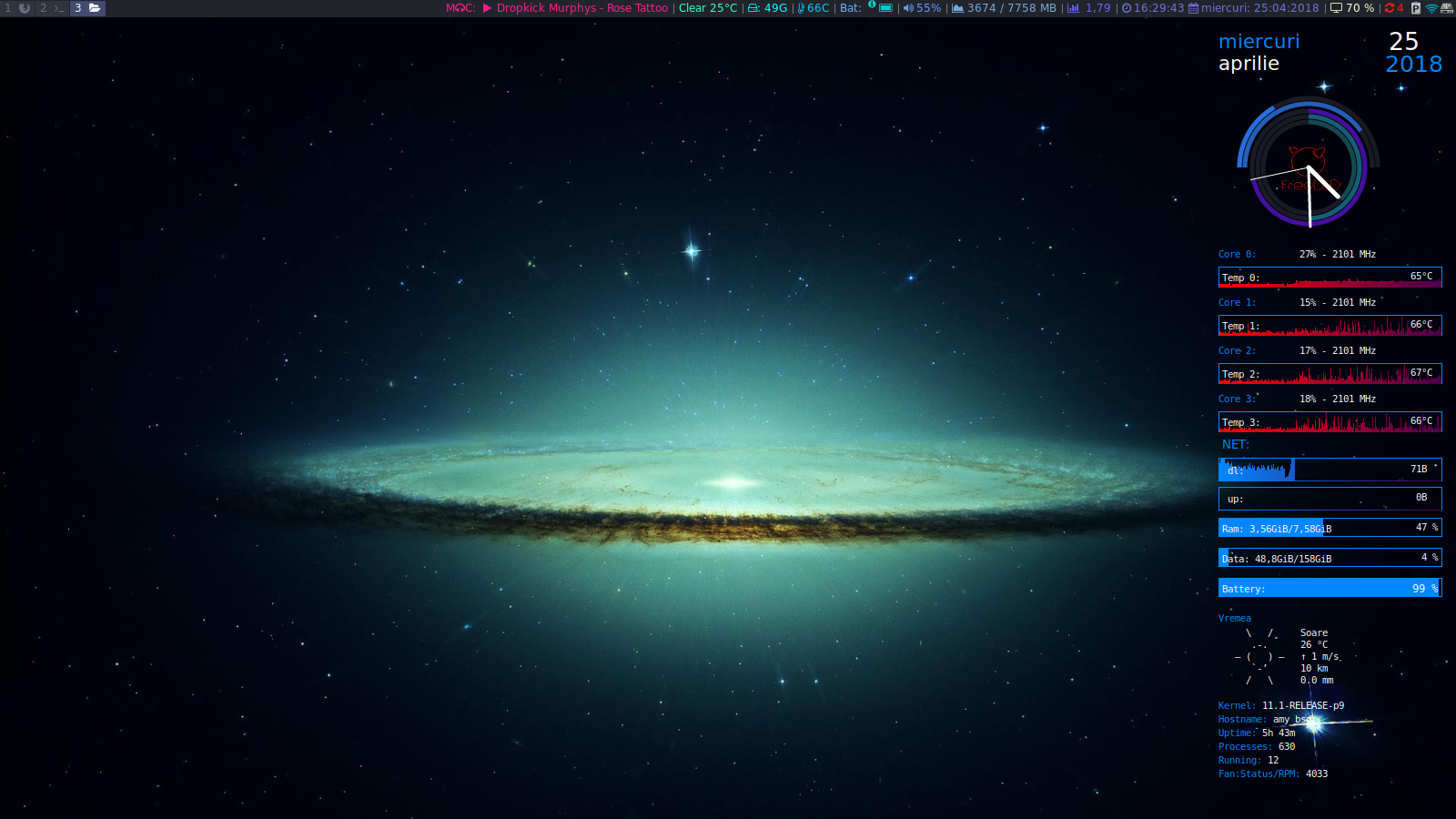 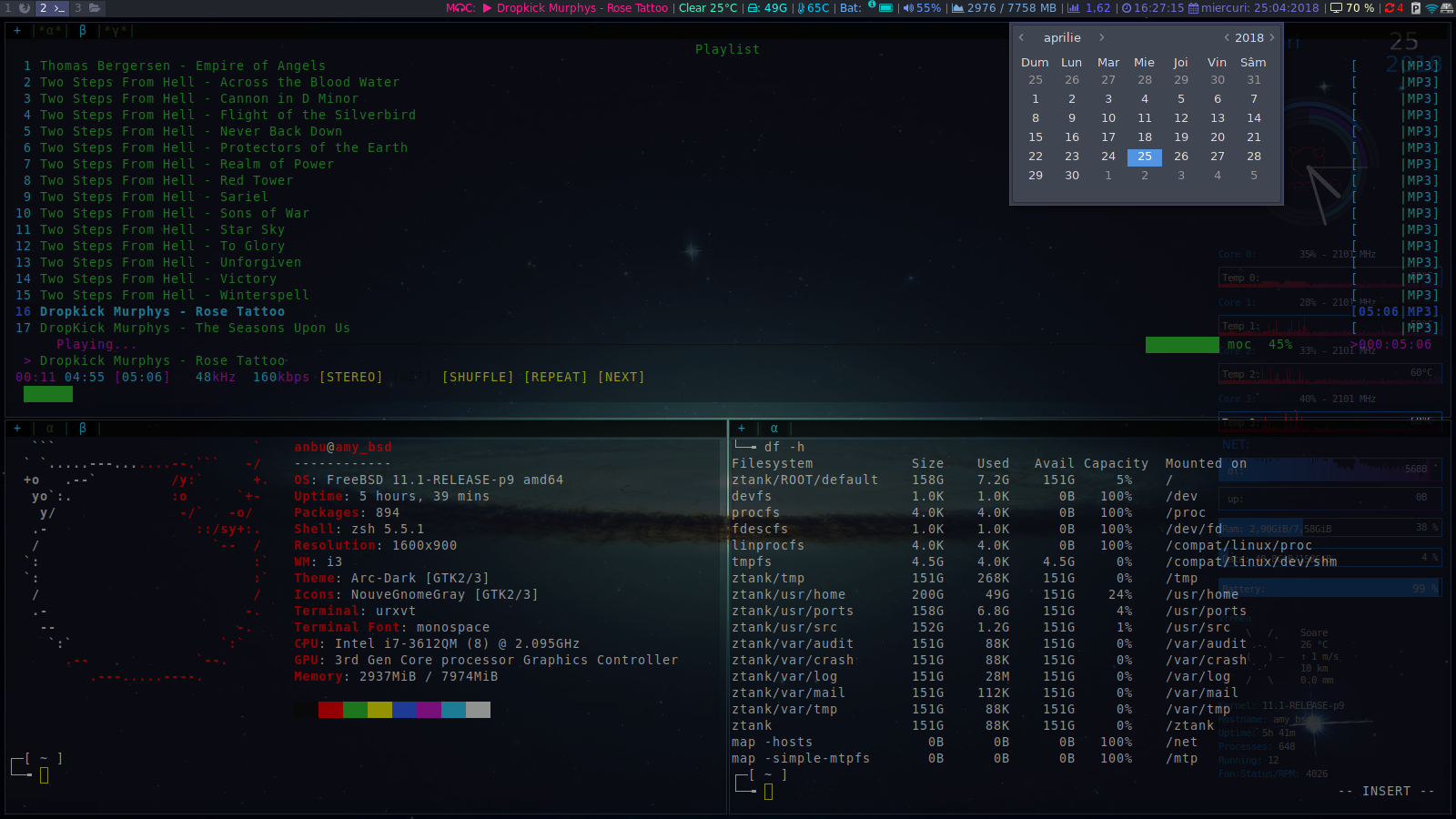 Here is a screenshot of openbox with conky, feh (as wallpaper), terminator and tint2: