I decieded to start this thread after reading the thread 'Which shell do you use?'.

I'll start, mine is below.


Code:
Please share yours. Moderators, if you think this is in the wrong forum please move.

Nothing big except for all the completion settings I just shamelessly copied from rbelk.

A few shortcuts for tracking down spam senders.

Code:
Also this, so the console autorepeat isn't slower than a turtle in molasses.

Code:
And of course Home and Delete:

It should work on FreeBSD, OpenBSD, OpenSolaris, and Linux.
It should in general be fairly portable (e.g. It checks if "vim" actually exists before setting $EDITOR to vim, etc.).

It's a bit of a mess and has "grown" over the last few years. I also have a couple of different flavours on different machines floating around

I'd like to join the thread and think I have a fair bit to contribute. I'm sure there's some fun toys in here that you might be interested in (especially the randomizations).

Code:
NOTE: My .bash_profile is over 6-times larger (note: I may be a bash user, but I certainly do not hate on [t]csh).

Just wanted to add some autocompletions that have been useful to me:

Code:
pkill(1) autocompletes from the list of running processes.

That reminds me, I need to look at that too. I'd like to auto-complete zfs filesystems.

If you can figure out a way to get make(1) to show a list of all possible targets, that's one I want to do also.
D

Some "funnies" in this one

Kind of interesting how your .cshrc shows some history about you after several years.

Nothing really "uber-leet" here; I find the DOS substitutions kinda funny in retrospect, though :e

Code:
Incidentally, the tcsh(1) section on completion is totally undecipherable to me. The above is because of some hints from this. Still not sure what n@*@ does, but if understanding was required before use, I wouldn't be here.

I use this for completing service(8):

Code:
Seems a bit simpler to me

I also have this for adding signals, it seems more complete than your version, doesn't add process names or PID's though:

If you can figure out a way to get make(1) to show a list of all possible targets, that's one I want to do also.
Click to expand...

Not a bad idea, I only tested this quickly. Seatbelt not included

The command to get a list of targets is:

Code:
Unfortunately, using this directly in a complete command is problematic ... AFAIK tcsh doesn't provide an easy way to escape the dollar sign ... tcsh has some stupid limitations.

I put it in ~/bin/compmake and used this in my ~/.cshrc

Code:
Seem to work for at least ports and /usr/src ...

Code:
Incidentally, the tcsh(1) section on completion is totally undecipherable to me. The above is because of some hints from this. Still not sure what n@*@ does, but if understanding was required before use, I wouldn't be here.
Click to expand...

The @'s are just a different delimiter, just as you can use a whole bunch of delimiters with most regexp implementations.
It's confusing to use an @ here because this is also a built-in and because it's far from a "conventional" delimiter like slash, comma, or pipe.
I'm not sure if all character are allowed like in regexps, IIRC @ is the only one mentioned explicitly in the manual

As a certain wizard would say, "one does not simply read tcsh(1)"
(t)csh is one of the more archaic pieces of "old" UNIX/BSD legacy. I use it because I've been using it so long I can do most of the stuff blind folded, but the more I learn about it, the more it's obvious it's really not very good (See: dollar-sign escape nonsense above). If you're new, I really wouldn't recommend it...

Here's a (better?) version which also skips all targets starting with a dot, typically not something you'd want to run as a user.

That has to be the best CSH alias I've seen in this thread, thanks wblock. I'll have to study this tomorrow. I'd stay up all night trying to figure the alias out! I started this thread to learn more about CSH and it's differences from the bourne shell and I've learned a lot!

I haven't made much changes to .cshrc.
prompt:

tcsh(1) can complete signals too. So, a simpler form could look like this:

Interesting. It's possible to do multiple completions for the same parameter:

I suspect @ is used just to avoid conflict with other common delimiters.

SirDice said:
That reminds me, I need to look at that too. I'd like to auto-complete zfs filesystems.
Click to expand...

wblock@ said:
Just wanted to add some autocompletions that have been useful to me:

Thanks for the inspiration for the portupgrade autocompletion!

Here is my version that, when autocompleting, only shows old ports for which a newer port version is available. (you need an up to date INDEX file in your portstree for this to work)

Here is few lines from my ~/.tcshrc 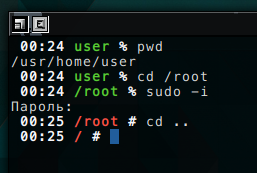 `man tcsh` said:
%/ The current working directory
%~ The current working directory, but with one's home directory represented by `~'
%c The trailing component of the current working directory
%C Like %c, but without `~' substitution
%M The full hostname
%m The hostname up to the first `.'
%t The time of day in 12-hour AM/PM format
%T Like `%t', but in 24-hour format
%p The `precise' time of day in 12-hour AM/PM format, with seconds
%P Like `%p', but in 24-hour format (but see the ampm shell variable)
%n The user name
%N The effective user name
%d The weekday in `Day' format
%D The day in `dd' format
%w The month in `Mon' format
%W The month in `mm' format
%y The year in `yy' format
%Y The year in `yyyy' format
%l The shell's tty
%L Clears from the end of the prompt to end of the display or the end of the line
Click to expand... 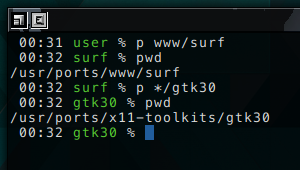 
Also tcsh got built in autocorrect function, add "set correct = cmd" to ~/.tcshrc for example.
Some other features that I use:

Code:
If you do not want to type manually "rehash" after each package installation,
add
Code:
to .tcshrc, and the list of available commands will be rebuilt for
each command completion or spelling correction attempt.

And "just for lulz",
alias for thefuck (app which corrects previous console command). By the way… new tcsh version was released,
Code:
It is available now on FreeBSD 11.0-STABLE, on FreeBSD 12.0-CURRENT and on FreeBSD 10.3-STABLE.

Code:
Just switch to original /bin/tcsh when you'll do a freebsd-update. Also use /bin/csh like a root shell.

I really hope that thay fixed tcsh history, finally… "csh shell history is puzzled", because of this problem I've even switched to zsh.
But it seems that new version doesn't have this problem anymore.

But I'm really missing one feature,
I want to be able to save my tcsh history after each tcsh command.
"alias precmd 'history -L; history -S'" saves, but it also adds some strange history events 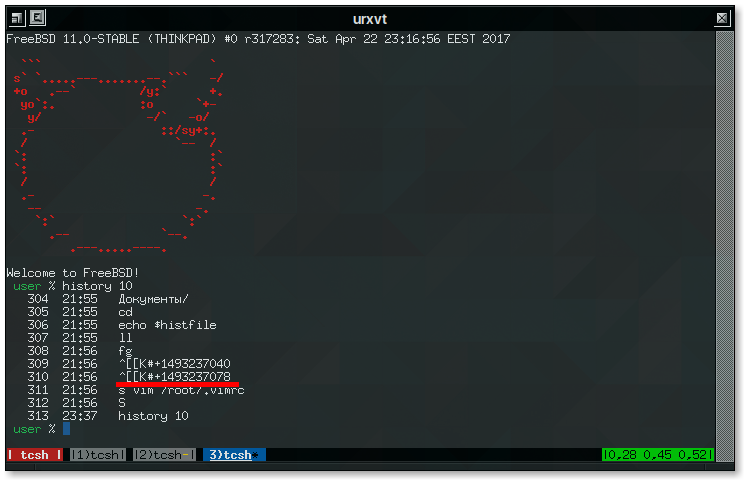 Code:
do the job, without any issues. When shell is interactive, it'll save history after each command,
also history between different tcsh sessions will be shared, because it also updates current session history list.
It should be added to the bottom of ~/.tcshrc, because histfile should be set before.

TC Shell power users, where can I read about it? man history is not helpful at all, because it opens this manual page,
also I cannot find anything about history flags (-chrSLMT) on tcsh manual page:

Or may be it is a bug and I should create a bug report?
Last edited: Sep 21, 2018
You must log in or register to reply here.
Share:
Reddit Pinterest Tumblr WhatsApp Email Link
Top