Solved Configuring IPv6 via SLAAC outside of bsdinstall?

Hello! My immediate goal is the installation of FreeBSD over a Remote SSH session. Prerequisite to that, I need to configure the network on the machine using a Live CD.

I’d like to configure IPv4 using DHCP and IPv6 through SLAAC in the same manner that bsdinstall does during a “normal” initial installation.

My understanding, and correct me if I’m wrong, is that the automatic configuration of IPv4 on the base system is done by dhclient. This appears to operate successfully when passing the argument for the network interface (that is, if I run dhclient em0, the machine appears to bind itself to the correct IP address).

However, FreeBSD’s implementation of dhclient does not include an argument for IPv6. I guess, then, that my question is this: 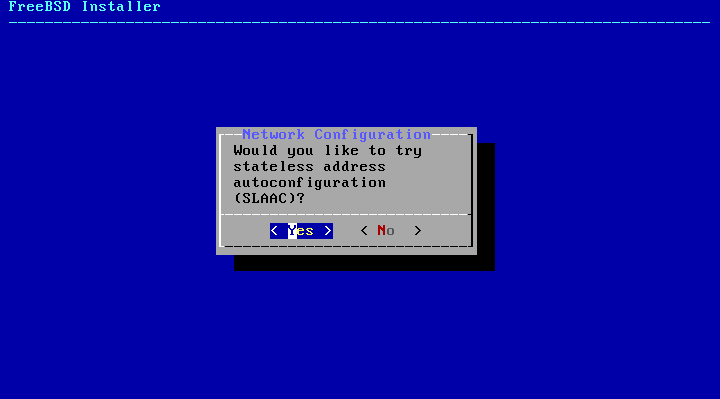 What exactly is happening to the system when bsdinstall initiates IPv6 configuration through SLAAC, and how can I replicate that outside of bsdinstall on the base system?

Edit: On further reflection, I’ve realized that this doesn’t actually matter toward my stated goal; the Network Configuration of the Live CD system isn’t passed into the system installed to disk over SSH. Nevertheless, if anyone knows more about how bsdinstall configures IPv6, I’d be thrilled to hear it.
O

I think it just add
Code:
in your /etc/rc.conf file.
Or your interface name instead of "em0".
OP
H

I think it just add
Code:
in your /etc/rc.conf file.
Or your interface name instead of "em0".
Click to expand...