Following on from olli@'s questions does that buzzing stop as soon as you play some i.e very quiet music? Again that one is symtomatic of the power saving stuff I mentioned.
D

The problem was described as buzzing but now it seems to be a tone. If it's a tone, then my solution earlier is not worth doing. And it won't be the power supply or any hardware at all.
OP
T

It seems to be once per minute, enough that if I'm listening to music, I take the right-side of my headphones off ...
OP
T

In my /etc/sysctl.conf, I set the default unit. In my /boot/loader.conf, I have set some power-saving options:

I will boot up the machine that had the problem later today once I get it back together.
OP
T

I booted up the machine ... it is a 7 Series C216 which is different from what this old machine is running. I should also note that the machine that had the issues had a 275W PSU with an Nvidia 1050 Ti. I think the PS was already underrated for the box. The current box I am running has a 375W PS and has the 1050 Ti in it currently.
OP
T

Ok, so now I have it on the old desktop and it was on both channels. Phew it just went away. It seems like perhaps it could somehow be connected with chromium / my work there as no sooner I logged in, it started. Luckily, it went away.

Haha, thanks, I am loosing it.

* Use a live CD/USB (FreeBSD, Linux, etc). Same problem?
* Disable all power-saving settings in FreeBSD
* Do you have same problem in CLI mode i.e. system/virtual console?

* Do you have any power saving feature/settings in your BIOS? disable them.

* PSU's capacitor can produce noises, but you should hear them from the PSU itself -- I'm not suggesting exclusively!
* Although fade-out noise strikes me as capacitor discharging, but evidently it's not the case.
* It's not continuous noise, thus(probably) it can't be some sort of grounding/shielding issue somewhere, or "60 cycle hum"-like noise (**)
(**) Similar to the humbucker e-guitars -- though, hum and buzz are not the same, there's a difference between the two.
OP
T

I am putting the parts back into the original PC, and will report back.

I find it interesting that you get the buzzing on all of your computers.
So, did you examine the cables? Without making sure the cables are actually shielded, all this experimenting might be of no use.


vigole said:
* PSU's capacitor can produce noises, but you should hear them from the PSU itself -- I'm not suggesting exclusively!
Click to expand...

This will become more and more of an issue in future due to the spread of MLCC caps, which have a special property called "microphone effect".
I guess in the future particularly vulnerable hardware might be abused as sound listening devices, even without having an actual microphone.


vigole said:
* It's not continuous noise, thus(probably) it can't be some sort of grounding/shielding issue somewhere, or "60 cycle hum"-like noise (**)
Click to expand...

Intermittent noise can be very typical for EMI problems.
Radar produces very regular intervals. I once lived near to an airport, and some very distant (weak) TV stations regularly got "buzzed" when the signal was very weak due to atmospheric/weather situation.
Other things that regularly are observed are motors that aren't sufficiently decoupled, refrigerators for example.
OP
T

I have the drives back in the original PC, but I didn't move the video card over Nvidia 1050 Ti. I haven't noticed the issue while playing pianobar @ full blast for the past few minutes. Time to move the video card back and see if that is the culprit. Even if it isn't 275W is a bit low, especially with the 1050 Ti.
S

1050 Ti is around 60 W. Your whole computer requires < 200 W even under full load. Now, typing into "275W" into Google brings "Dell Optiplex" and that, certainly, isn't high quality hardware.

That was a good find, shkhln

Well that says all.

When I find Dell computers/workstations, I normally gut them for parts, because of their PSUs.
They are utter crap imho, the inside is so cramped that maintenance, even only cleaning, is an absolute hassle, not to even think of recapping.
Due to the heat in the cramped space, you usually find bulgy caps everywhere inside.

And because of the non-ATX pinout, boards and PSUs are useless, I just salvage RAM and CPU and ditch the rest. 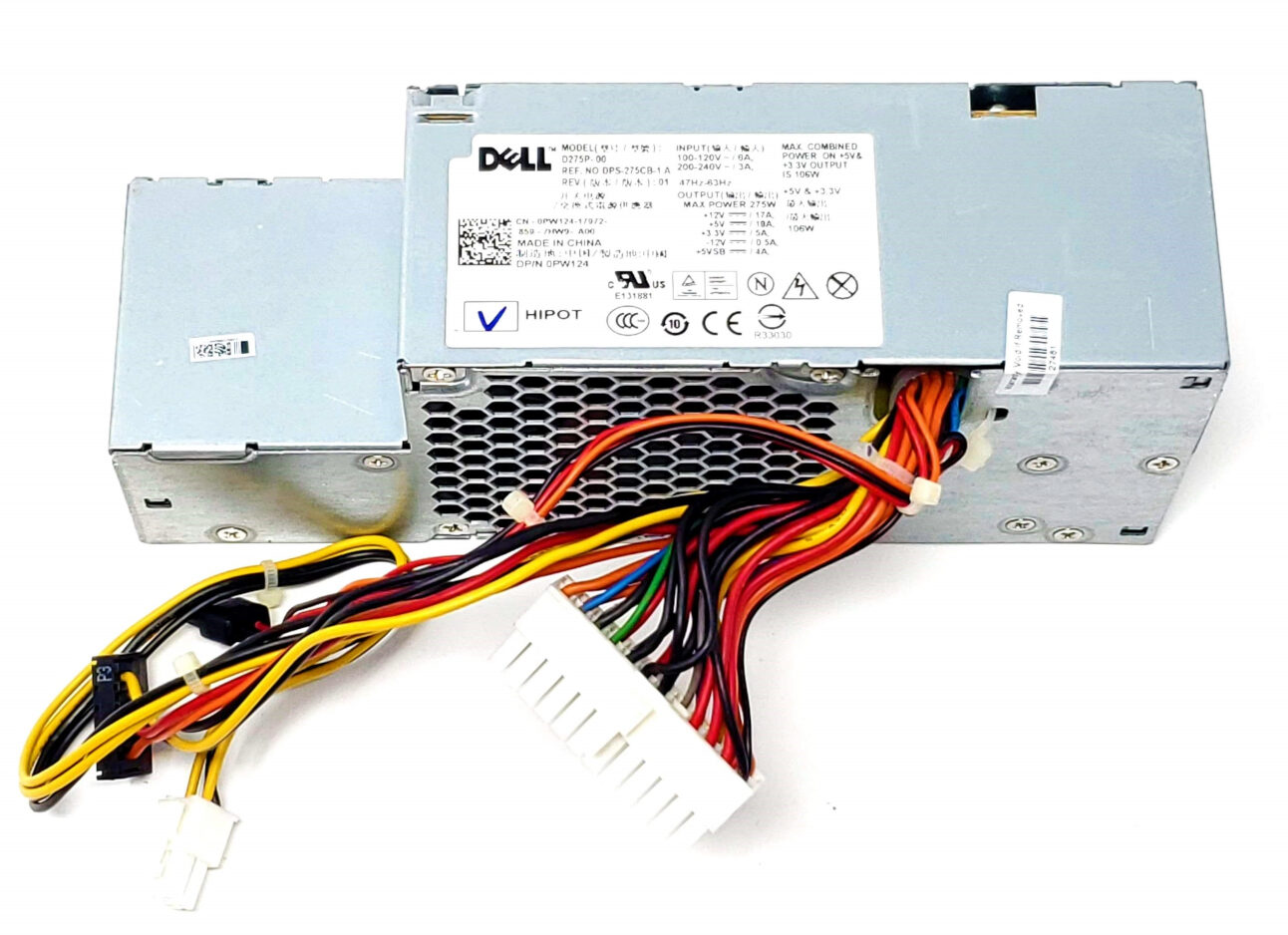 Snurg said:
When I find Dell computers/workstations, I normally gut them for parts, because of their PSUs.
They are utter crap imho,
Click to expand...

Well, they are definitely a case of you get what you paid for. If you go for their cheapest home/office computers, then yes, you get the low-quality stuff. HP/Compaq etc. the same.
S

I have it in the original configuration and no buzzing yet.

Is it possible that my system just needed rebooted ...

@Olli@, I do not understand your logic (only one channel -> must be software). It's the other way around: the audio hardware - however small it is nowadays - has physical dimensions. The parts that make up tne one channel might be nearer to some source of inference than the other. It can even shield the other channel from inferences. Besides that, it's well known that one shall not run the PSU @ it's limits for a longer period.
OP
T

I have not had an issue since putting everything back into the PC. Like I said, perhaps something needed rebooted even though I recently rebooted after running freebsd-update ...

Hmm, maybe we need to learn something from the Windows world...
There the first step would be to reboot. I once had a colleague who rebooted his computer several times a day, stating it is to make sure that it does not start to act funny.

Mjölnir said:
@Olli@, I do not understand your logic (only one channel -> must be software). It's the other way around: the audio hardware - however small it is nowadays - has physical dimensions. The parts that make up tne one channel might be nearer to some source of inference than the other. It can even shield the other channel from inferences. Besides that, it's well known that one shall not run the PSU @ it's limits for a longer period.
Click to expand...

Well, then please explain to me exactly how the PSU can cause a regular buzz on just one channel that appears both on an analog 3.5mm jack and on the digital signal of an USB port (and it obviously affects USB audio only, but not USB keyboard, mouse or other protocols).

For example: Does the PSU have anything to do with USB? Does it “know” how to dissect the various layers of the USB audio protocol, and replace just the sample bytes of the right channel with bytes that represent a buzzing sound, and recalculate the CRC checksums of the USB packets? I think this is extremely unlikely. Unless your PSU comes from the NSA, of course.

Note that there are no analog parts involved when using USB audio, the path is completely digital, so the PSU would have to inject digital „buzzing bytes“ at some point into this path, where ever that may be.

Also note that the data paths for the 3.5mm jack and for USB audio are completely different. The former comes from the audio hardware chip on the mainboard, goes through a DAC (which is often – but not always – inside the audio chip), and then through a small amp (which is usually separate). Conversely, USB audio does not come from the audio hardware on the mainboard. It comes from the USB controller (which can be inside the processor, inside the chipset {sometimes called north bridge or south bridge}, or it can be a separate chip on the mainboard), goes through one or more USB hubs, and finally reaches an USB port.

So what do analog audio and USB audio have in common? Almost nothing. It’s even unlikely that they’re on the same PCI bus (although it is possible). The last thing that they have in common is the snd(4) framework inside the kernel – After that, they go their separate ways.

Therefore I’m positive that it must be a software problem.
OP
T

So, I recently had an issue with my system updates...

I was running pkg update and then pkg upgrade nightly. This caused my system to be partially hosed (couldn't start X). I was able to rectify that after doing freebsd-update. Could it be related? I did restart after freebsd-update though.
D

tOsYZYny said:
Is it possible that my system just needed rebooted
Click to expand...

No. But this all sounds like my original suggestion of tapping on everything. You've now wiggled everything around by taking it all apart and putting it back together.

We have an idiom for this: "Da staunt der Laie und der Fachmann wundert sich". Loosely translated: "You must be pulling my leg!". Literally it would be: "The layman marvels and the expert is surprised".
You must log in or register to reply here.
Share:
Reddit Pinterest Tumblr WhatsApp Email Share Link
Top