The problem now is not with a make install failure. The two ports compiled to successful completion. The problem now is that a "handshake key" between the perl5.22.2 and the p5-DBI-1.636, is wrong. Why the mismatch?

If I try to execute a simple perl script that utilizes the DBI, the following error diagnostic:

XS is an interface through which a program written in the Perl programming language can call a C or C++ language subroutine. The letters stand for eXternal Subroutine, or xsub, where external means external to Perl, i.e. written in some other language.

. . .XS modules are not without drawbacks. They are difficult to write and maintain, and they may only be installed if a C compiler and the header files that the Perl interpreter was compiled against are available. Also, new versions of Perl may break binary compatibility; if this happens, all XS modules must be recompiled.
Click to expand...

I have reproduced this scenario on two different FreeBSD v10.2 platforms: a Pentimum-4, and a Dell 8-core 2950.

What to do?
OP
OP

People . . .this is a real problem! Who should I address for an answer. I updated ports. I reinstalled the Perl ports as previoulsly indicated. I (a user) expect it to work. Is anyone using the Perl DBI with MySQL? (. . .I would think so.) If so, what have you done that works, that I'm doing wrong.?

I know this thread is one year old, but today this problem also hit me. I found both a cause and a solution, but truth is that the whole thing still appears somewhat illogical and with that pretty annoying too.

First things first: this usually happens when you rebuild and/or reinstall Perl without doing the same for any libraries which depend on it (you know: pkg info -x p5). In the old days (20141126 from /usr/ports/UPDATING) a mere # portmaster p5- or # portmaster -r perl5- would be able to solve this for you. But not anymore...

I don't know why (my expertise on Perl only goes so far) but these days libraries which seem totally independent will still check for the existence of libraries and will complain when a mismatch is found.

Example: I tried to re-install devel/autoconf and got greeted by a similar error message during building:


Code:
I traced this back to List::Util which turns out to be provided by lang/p5-Scalar-List-Utils. So here's where things got a little bizarre for me... While trying to re-build this port I got greeted by the exact same error message. This led up to me believing that this whole thing is by design: any Perl related action can somehow scan all the available libraries and if a mismatch is found it will trigger an error.

Makes sense during Perl execution, but makes less sense (from a user / admin point of view) when you're in the process of re-installing that exact same library!

The solution in this case was somewhat simple: # make deinstall reinstall clean. By first (forcefully) removing the port I also ensured that the library mismatch could no longer be detected (at least not the one involving around ListUtil.c). Then I recompiled & reinstalled the port, thus also re-establishing any dependencies.

As of right now this is pure speculation on my part: Because this error doesn't always occur with every Perl library / module I'm tempted to conclude that some Ports actually do depend on others yet fail to mention this:


Code:
Considering that this build failed with the error shared earlier, and which got solved by re-installing that Port I'm now led to believe that devel/autoconf also depends on lang/p5-Scalar-List-Utils.

Once again: this is only a theory I have so far and which needs further investigation. For all I know this could also be a "cascading dependency" (can't come up with a better name). So, in other words: one of the Ports mentioned above depends on lang/p5-Scalar-List-Utils and that then led up to the error message during the build of devel/autoconf.

Summing up...
For the record: As said above I know this thread is old, but I can't help wonder if this won't become a recent issue when we'll eventually see a new Perl version emerge.

While rebuilding all ports during upgrade from 11.2 to 12.0... I Just ran in to this specifically, the very same problem, thank you for sharing this!!!

Additionally "loadable library and perl binaries are mismatched" errors could in other situations be related to ABI version of the Host OS that built either perl5x or the Perl List::Util/Base64 libraries... Meaning this is not going away any time soon, as we both need to rebuild everything perl related for a perl upgrade and rebuild things when upgrading the OS.

Irony is that Perl used to be a part of FreeBSD's base so this would not be possible unless installing a port of Perl to run instead of what was included. Maybe all of this is something that FreeBSD would like to go away and everyone should just use the pre-configured pkg version of ports... 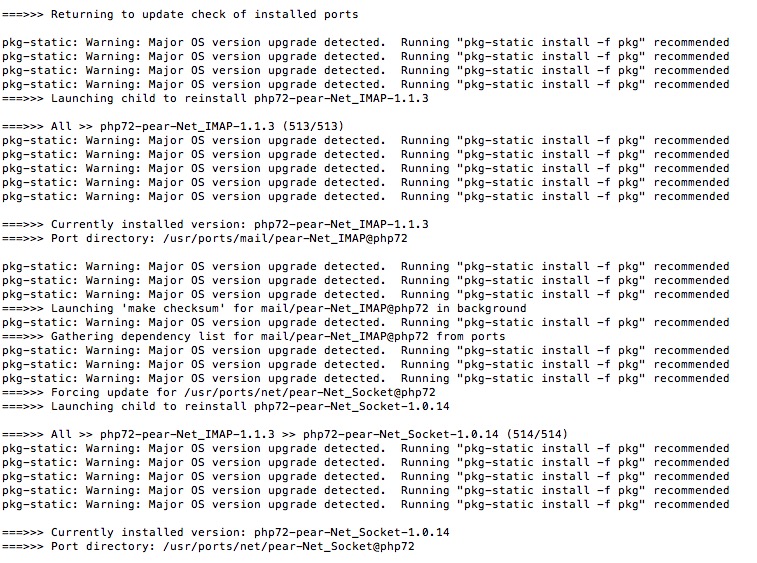 Had a similar error [Socket.c: loadable library and perl binaries are mismatched (got handshake key 0xd480080, needed 0xe180080)] while building openssl-1.1.1d. The problem was gone after rebuilding gettext-runtime.