Try to invent a joke.

Overwhelmed as one would be, placed in my position.
Such a heavy burden now to be The One...
Born to bear and bring to all the details of our Ending.
To write it down for all the World to see.
But I forgot my pen...
She-it the bed again.
Typical.

A query walks into a bar, sees two tables and asks: "Do you mind if i join you?"
OP

Was the query normal ?

When I was in college, taking a Systems Administrations class back in 2003-04, we were learning about how to deal with misbehaving processes. The command to terminate such a process just happened to be # /bin/kill - 9. We used /usr/bin/talk to give each other fair warnings before proceeding to terminate the other guy's process (and kick him off the practice server). And then in class the next day, someone was saying, "Y'know, I got killed last night, so I couldn't do anything".
S

Three penguins walk into a bar. Which was stupid, the second two should have seen it. (Not original).

No such thing as an original joke, I don't think, even if you never heard it before.

This guy walks into a psychiatrist's office, with a duck on his head. The psychiatrist looks up, and the duck says, "Can you help me get this guy off my ass?"

Code:
Old sysadmin joke I picked up in college.

Ever end up in the wrong country on your travels? This was really funny.
S

Back when I worked in a different business, one day, I made a pretty stupid mistake. Another customer, with whom I was pretty friendly, called later to order, and we were talking and she asks, How are you? And I said, Embarrassed and told her of my mistake.

And she said, Hey don't feel badly. My sister works for a travel agency, and yesterday she sent a client to Paris, France, and their luggage to Paris, Texas.

And ya know what? I did feel better.
Which reminds me of another one. There I was moping, and heard a voice saying, Cheer up. Things could be worse.

So, I thought, That voice is right. I cheered up. Sure enough, things got worse.

There once was a free software project that prided itself on its permissive licensing, and then switched to a development tool written by Linus Torvalds and exclusively GPL.

A truly wise man never plays leapfrog with a unicorn. --from the fortune file

It's old but original: 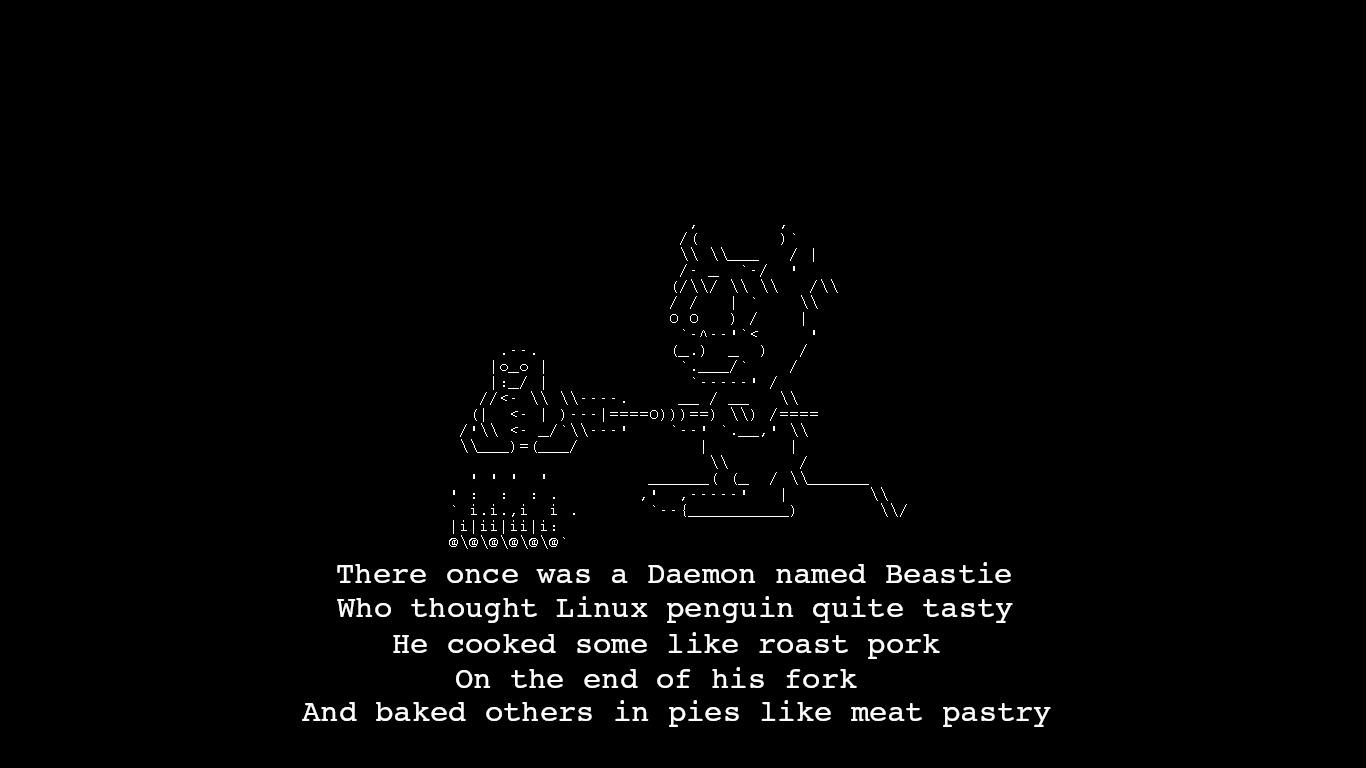 The query? Yes.
The Table? No. It answered: "Do not CROSS me......"
after hearing the answer the other table lost its normal form....

When I was leaving Montreal, I decided to stop at one of those rest areas on the side of the road.
I go into the washroom. The first stall is taken, so I go into the second stall. I had just sat down when I heard a voice from the other stall…
- Hi there, how is it going?

I'm thinking to myself, what the hell? Okay, I am not the type to strike up conversations with strangers in the loos on the side of the road. I didn't know what to say, so finally I say:
-Not bad…

Then the voice says:
- So, what are you doing?

I am starting to find this a bit weird and very uncomfortable, but I finally reply with:
- Well, I'm going back east…

Then I hear the person, all flustered, say:
- Look, I'll call you back honey--every time I ask you a question this idiot in the next stall keeps answering me!

That sound? HDD is dying!

A baker, geologist and a lawyer walk in to a bar. They all have a few rounds of drinks and declare: we should collaborate on a project together. Still another round of drinks. In conclusion, they decide to cook-up, a rock-solid, legal defense strategy.

Last words of Al Capone,
There's a violin in my violin case!
F

I think the same, FreeBSD is working too bad that I am back to systemd
T

There was a trending joke in the recent past.

"Why are people from Norway so good at editing files in Linux?"
"Because their ancestors are vi-kings!"