XCB (X-protocol C-language binding) was intended to fully replace Xlib for X11: so far, XCB has gradually replaced some parts of it. Its purpose was to be more efficient and to be easier to program. X11 is a protocol. Xlib and XCB are both API's and library sets.

Xlib (also called libX11) is too low level for most graphical programming needs, it: has features not commonly used, had lack of compile checks, and was complicated to program with. Simple programming tasks needed excessive coding in Xlib. Its purpose was also too wide range for both applications and toolkits.

XCB is in C: it uses C header files, and it requires knowledge of C programming. XCB's library is libxcb, and its header is xcb.h. To compile programs that use XCB, they must be linked to relevant XCB's libraries. xcb-proto only installs header files.

XCB is POSIX compliant. This API library is also thread-safe, and it has better error handling than Xlib.

Parts of Xlib were replaced by parts of XCB. Xtrans (X Transport Interface), a low level part of Xlib, was replaced with XCB. Also, Xlib can receive calls to XCB through a transport layer from X11. XCL is an emulation layer from XCB to receive instructions from Xlib outputs. Many programs originally written for Xlib, are partially implemented in XCB, and receive mixed instructions for these two libraries. Parts of XCB have been available within replaced parts of libX11 since 1.2.0 (this became default since 1.4.0). LibX11 version 1.7.2 is currently in ports, as of this writing.


Previously XCB used M4 based protocol description language. This was replaced with XML in 2004. XCB extensions are simplified, as all each one needs is an XML description.

There is a lack of documentation for XCB, but enough information on it can be found in X11 documentation and in the programming notes.

x11/thingylaunch can be compiled with XCB instead of Xlib. x11/lemonbar is in XCB. x11/polybar is another bar, but it has more dependencies and options. Other programs in the ports tree that use XCB and not Xlib are few: x11/xtitle, x11/xlsatoms, x11/xcbautolock, x11/ly. Most other programs that use xcb, instead of xlib, rely on QT5 or Rust.

Interesting. Thank you for posting this.
OP

MCWM & BSPWM
x11-wm/mcwm is a minimalist window manager that requires a terminal emulator to be run with it, and x11-wm/bspwm is a tiling window manager with binary behavior which by default uses x11/sxhkd for keyboard inputs. Both of these window managers use bsd-like licenses.

MCWM has a low residential RAM footprint of about 2.6MB. Xterm adds about 14MB to that. BSPWM uses about 3.4MB for resident memory. SXHKD adds about 2.9MB.

Xinerama adjusts maximizing windows on multi-monitors. When it's not compiled in to other window managers, a maximized window will take up all of 2 screens.

EWMH and ICCCM are compatibility standards for window managers.

XMU and Xext aren't needed for XCB. libXRendr is traditionally a dependency of XFT for fonts on Xlib, but is now obsolete. XFT may not be relevant for XCB dependencies. 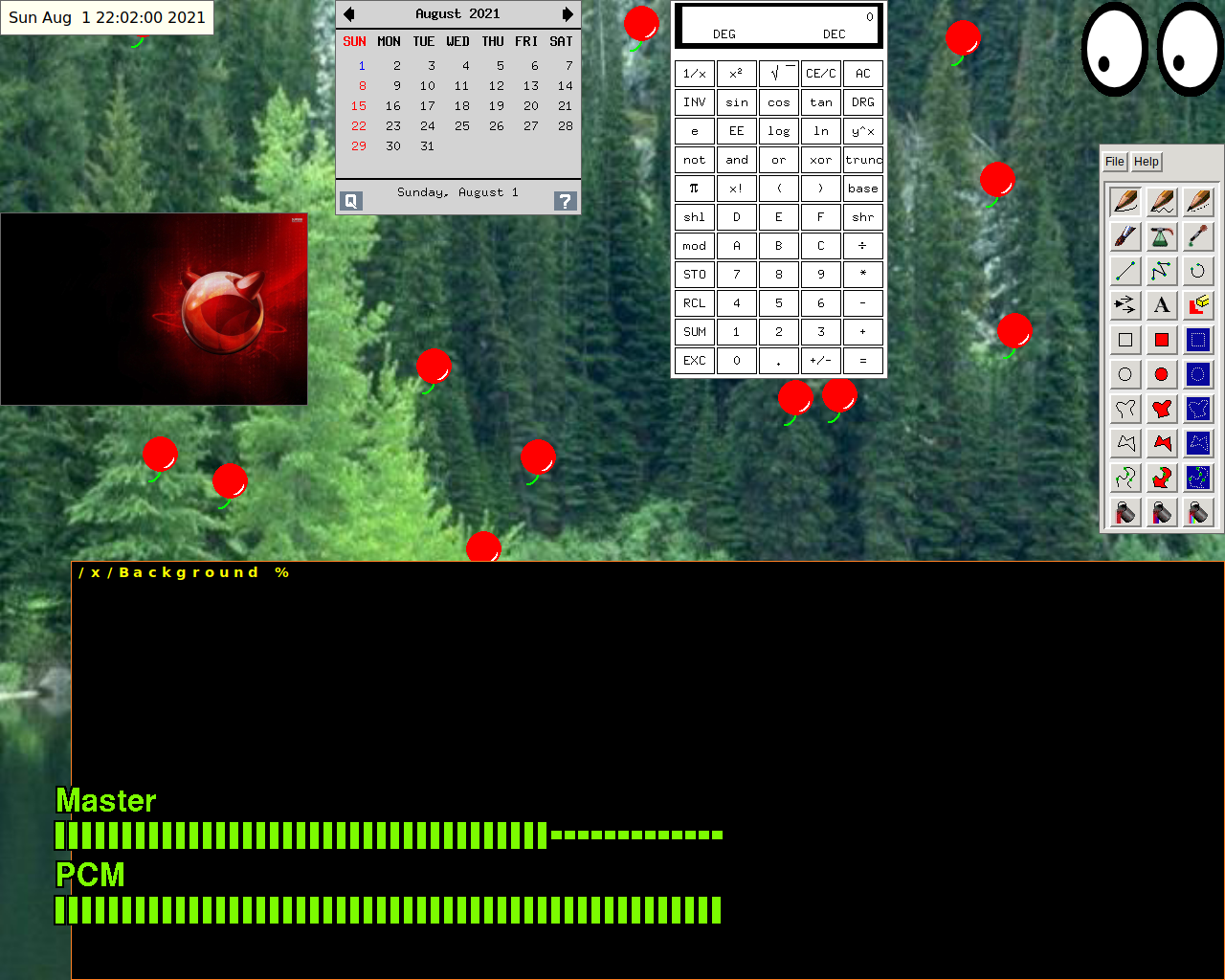 Screenshot of MCWM which uses XCB, and of xterm. bgs or xsetroot are needed to set the background. This image is from the thread: Thread screenshots-of-bsd-window-managers-for-x11.81505/. From .xsession/.xinitrc, this window manager requires a different way to start than other window managers: xterm is started last with exec, and the ampersand goes after mcwm: 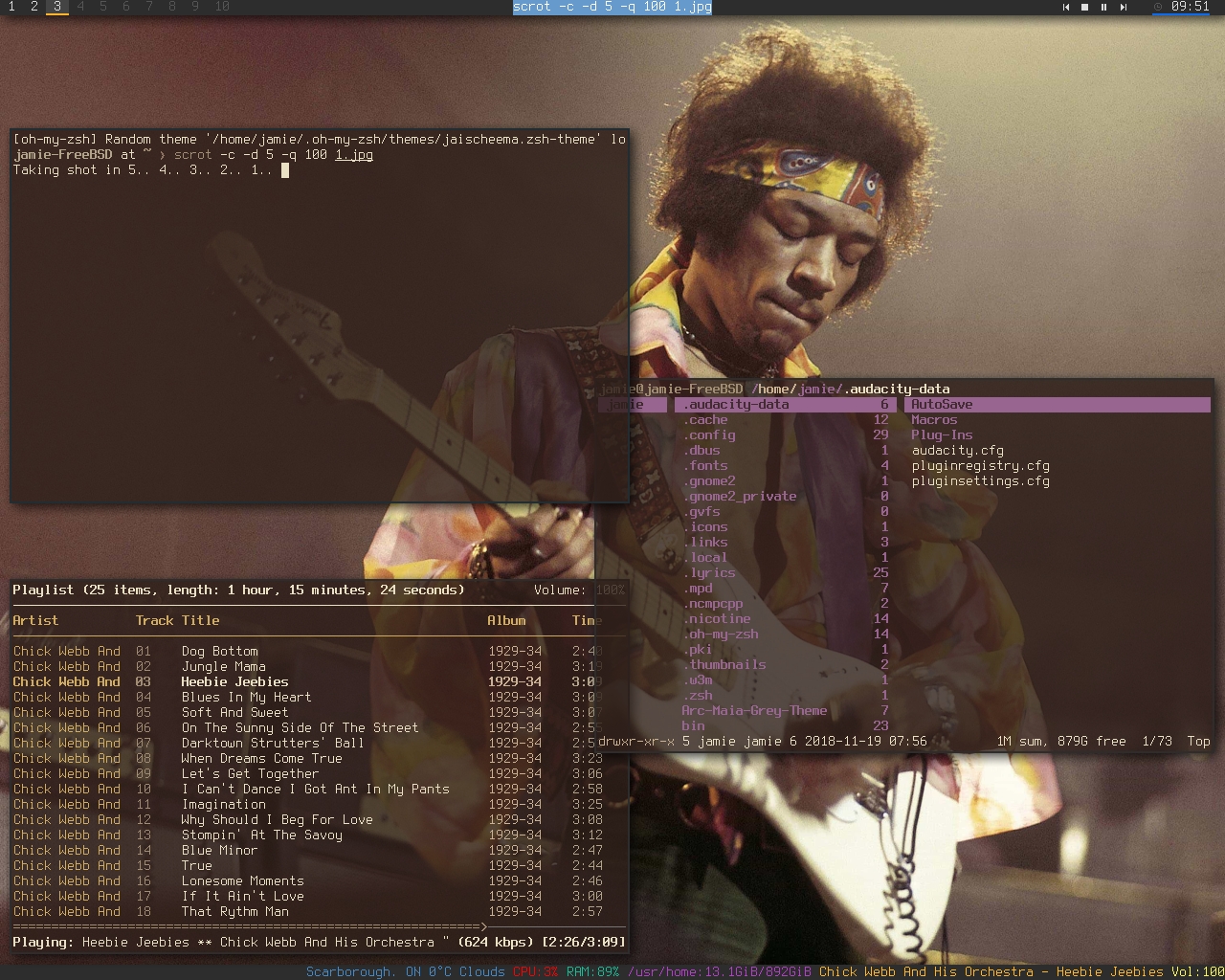 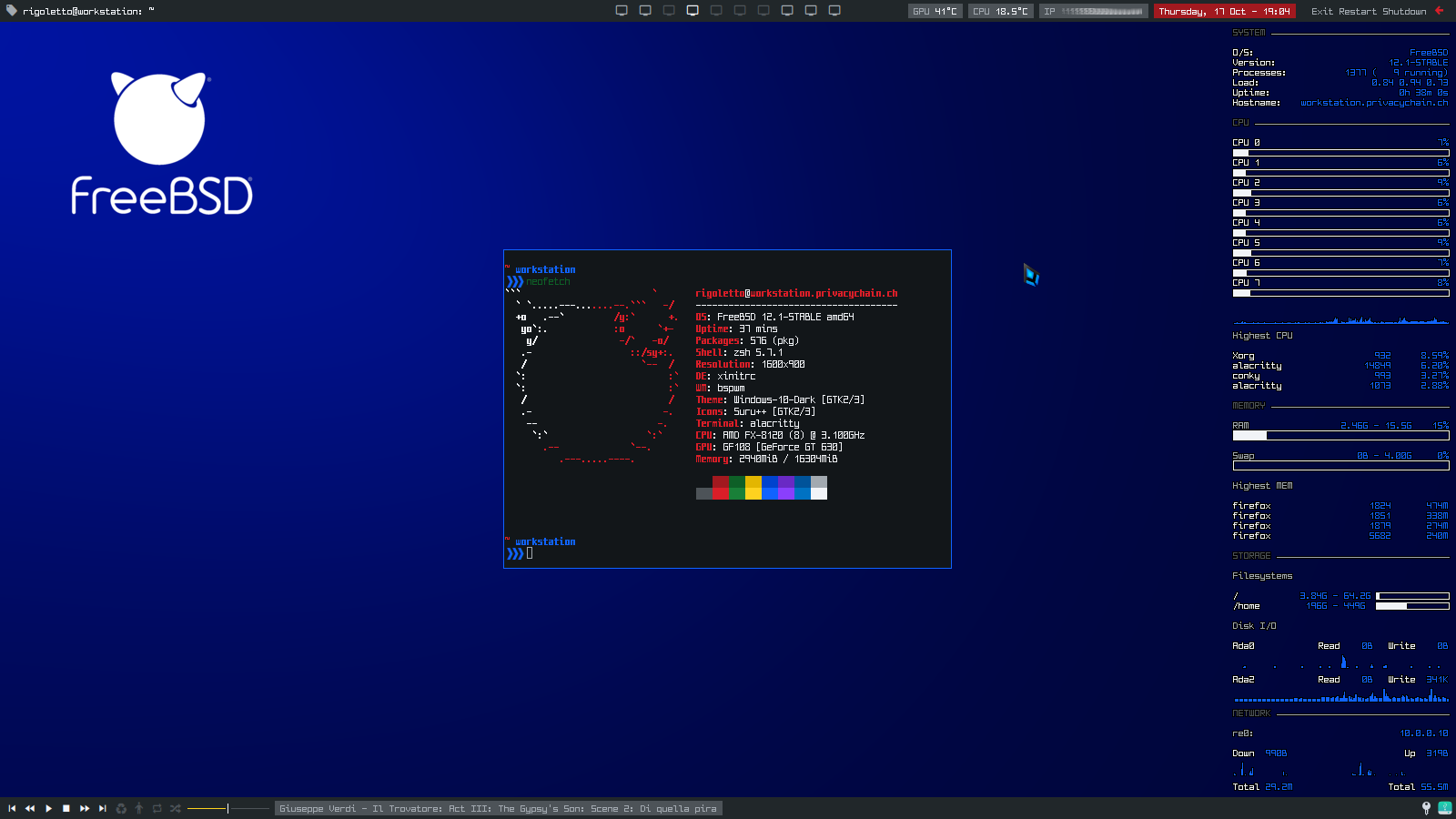 BSPWM screenshots by tedbell & rigoletto@ from Thread freebsd-screen-shots.8877. (The image on the left uses Polybar and dzen. Both images use Conky.)

Edit .xsession or .xinitrc to:

Code:
Cairo
Cairo graphics library can be compiled with XCB turned on, and Xlib and glib turned off. It is under both LGPL and MPL licences. Cairo is nice, but it is too heavily convoluted into Gtk.
You must log in or register to reply here.
Share:
Reddit Pinterest Tumblr WhatsApp Email Share Link
Top