This is for the RES (resident memory) RAM usage of window managers (from my computer in August 2021). The top command was used to get these numbers.

Before reinstalling JWM a few days ago, this window manager used 4 to 6MB of residential memory with optional dependencies on, and with a background image set. Update: After re-compiling later on, JWM appeared to temporarily use 15 to 300MB of RES when a background image was set. It seemed that, after a while, the RES memory for JWM dropped back to around 10MB. Using an external program like bgs for setting the background doesn't cause a temporary increase in RES, but it doesn't allow transparency with windows that use it.

https://l3net.wordpress.com/2013/03/17/a-memory-comparison-of-light-linux-desktops/comment-page-1/ shows memory usage in MB from 2013, it's not indicated what measurement of RAM is used (whether it's residential memory): 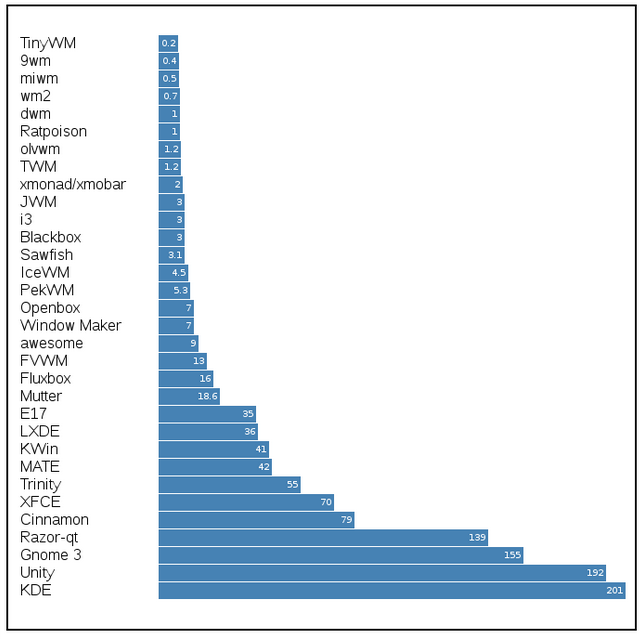 A few from this chart that are BSD-like, for comparison:

A previous discussion with the narrower topic of TinyWM is at Thread tinywm-the-lightest-of-all-window-managers-and-desktop-environments.81880.
Last edited: Sep 4, 2021


grahamperrin said:
With base memory halved to 1,024 MB, swap enabled and video memory increased to 48 MB:

From the manual page for htop(1):

It may be human-readable, but it doesn't help me … powers of 1024, FFS. I have no idea what 370 M is in MB and right now I'm too lazy to use an online converter.
You must log in or register to reply here.
Share:
Reddit Pinterest Tumblr WhatsApp Email Share Link
Top