When did people first start using BSD as a graphical desktop?

When did people start using bsd as a desktop? I was poking around on archive.org for clues, and found only bits and pieces such as a dead link to an article

isseeder96 said:
When did people start using bsd as a desktop?
Click to expand...

I had XFree86 running on FreeBSD 3.0. Does that count? I can even remember something I tried on 2.2. Back in the day XFree86 was a monolithic monstrosity, I think it took me two days to build. So I'm going to say right from the moment XFree86 was available on FreeBSD. The ports tree still has the history but unfortunately no date when it was added to the ports tree.

X11 ran on BSD before BSD split into 386BSD, BSDi, OpenBSD, FreeBSD, NetBSD, and whatever else. It also ran on BSD-derived systems such as Ultrix. I remember running X on a DECstation (MIPS CPU) with Ultrix (which was fundamentally 4.2 or 4.3 BSD). That must have been about 1988.

My experience: FreeBSD 6.2, around 2007. It was KDE 3 or somethings (I can't remember exactly which version it was). And I compiled it! hours and hours. It was hard And there was a great deal of reward. I didn't expect to have a working sound. But it worked. "Son of Man" i.e. Ozzy Osbourne's "Iron Man" covered by Marilyn Manson, was the first song which I played on FreeBSD machine, for weeks and weeks!
B

If you're using "BSD" loosely and "people" meaning consumers; the initial release of NeXTSTEP was back in 1989. This was an actual product, as well.
R

For me, around 1994 or 1995 on FreeBSD 2.x. Desktop is relative though, there was some flavour of X running on a FreeBSD server, that I could access with my desktop at the company. I have no details, as I was not involved in system administration back then.

We had a very involved process to select our successor to SCO Unix: we got one Slackware CD (or was that SUSE?) and one FreeBSD CD. Linux failed to install, FreeBSD worked. The company is still using FreeBSD for most server applications today.

Honestly, I wish I knew about FreeBSD for as long as a lot of you have! Sheesh. FreeBSD was born on my best friend's birthday, November 1st, not counting the year, and it is has been around for about as long as I've been alive.
J

So long ago I don't remember if that nano is meant for windows or bsd...

Samuel Venable said:
I wish I knew about FreeBSD for as long as a lot of you have!
Click to expand... 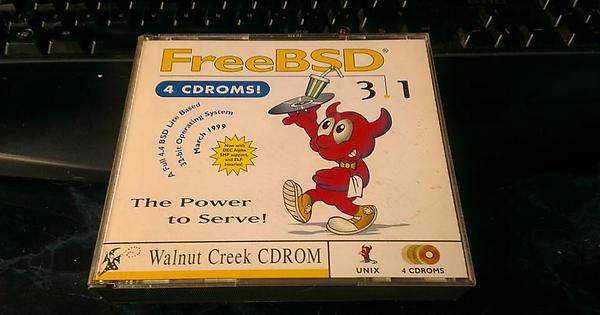 1164 views on Imgur: The magic of the Internet

Previous versions I downloaded. Back then you could download two floppy images, boot from those and install the rest over the internet. Tried to download an ISO image over a telephone connection when you still had to pay by the minute. Took the whole weekend (lower rates) and the transfer died Sunday evening at 96% Monthly triple digit phone bills weren't fun either.
M

My first source of FreeBSD (actually 386BSD back then) was university, so I grabbed a tape (DDS if I recall).

In the early days, even with binaries released, I always built from source because the generic kernel was pretty lean and wanting specific SCSI support required it (I forget the cards, adaptec maybe?).

Later it was Walnut Creek CDs. Our home internet sucked 20 years ago so network downloads were just not an option.

A X window "desktop" has always been available. It was sparse, to say the least, 20 years ago and really only used so you could have multiple xterms open and the obligatory xeyes...
P

SunOS 1.0 (1983) was the first I saw. Our lab before that had a mix of Unix command-line terminals (with PDP11s) and dedicated workstations like the Perq. I hated SunOS in comparison, and scarcely used it. The Unix Haters Handbook (wikipedia) rants about moving from Lisp machines to BSD (IIRC) in 1994 - wonderful and funny foreword by Donald Norman. We had servers running SunOS, later moved them to Solaris then FreeBSD 1 or 2... that was very different.

My journey on BSD began when I had to set up a Mac mini (PPC) in an internet café (sort of). The guy who gifted it told me that FreeBSD runs much better on that box than Linux. But he took out the harddisk , so I had to install a new system. Instead of trying Linux anyway, I trusted him and got a fresh release CD. I was very pleased with FreeBSD's clean configuration philosophy and that most software ran smooth, e.g. KDE3. Was there an issue with sound? Dunno. A while after, my private laptop running a very African Linux distribution crashed irrecoverably during an update... That was when I switched completely to FreeBSD (PC-BSD), about 2007/8? OK long before that I had a NeXTstation at work, but that's a different story because I didn't have to configure that OS like you have/can on (Free) BSD.

I got mine installed when FreeBSD 10 was still supported and decided to go with a system that's different. I have used Debian/Ubuntu before so I dig into using my 2008 laptop to learn more about BSD but if I need to run an application that's not available or something I've tried on FreeBSD that doesn't work I have windows machine that I keep, but this 2008 laptop has been my primary source of work and general usage.

It's only been recent that I dropped KDE due to a bug issue with the dri kernel gpu issue. Previously I had to upgrade to 12.1 from 11.4 since there were packages that dropped support that kde desktop needs and now used xfce which loads fine.

SirDice said:
The ports tree still has the history but unfortunately no date when it was added to the ports tree.
Click to expand...

People developed X on DEC hardware donated to project Athena running Ultrix and/or BSD 4.0. So 1984 is when people started using it, though to be fair it wasn't widely used until X10 in 1986... Prior to that people used research unix to create things like the BLT terminal (1982) which was running a 7th (later 8th) edition research unix. 7th Edition is the precursor to the BSD line and the 8th edition is BSD4.1 with some parts AT&T didn't like replaced. Sun's SunView was a graphical desktop as well, released in 1983 running on a 68000 which ran a port of 4BSD, but wasn't X. So the roots of desktop on BSD go back to the very earliest days of it being a thing... I didn't start using SunView until 1986 though and we could choose between it and X10R3...

It seems like a lot of people start out with Linux. For a true 1990s Linux experience they should try Arch Linux, their methods of installing the system and using chroot are exactly like I remember. Anyways, so far as desktops go Ubuntu always seems like the easiest to just get a Unix like system up and running.

However, after a period when things start to malfunction, the ease of use starts to fade into a giant unmanageable ball of confusion.

This is about the time when Unix-like users start looking for something simpler, more stable, less overhead, etc. They could either go with a low overhead Linux distro such as Arch or something like Slackware or they could go with a BSD system.

I chose BSD mostly because it's more centralized, better documented, more consistent, etc. They don't have as much of a selection of software, however, they have all of the software I require. They also appear to have much greater commercial support than these other low overhead Linux distros. They don't appear to be on the bleeding edge as much as Linux, although the release systems always appear to work [if they don't work fixing it isn't very difficult].

So long as FreeBSD supports my hardware, I probably would always choose it first, it's just so easy to install, configure, and fix [everything really is just a binary or a text file]. I'm going to install it on a Raspberry PI next, for these same reasons [I like Pine64 more, but it's more expensive and less capable with FreeBSD, a 1-2 watt computer is too tempting to pass up].

BostonBSD said:
They don't have as much of a selection of software, however, they have all of the software I require.
Click to expand...

An important point most people ignore. Out of the 10,000 editors out there, you only need one and most people choose one of a very few, and it's available on FreeBSD.

BostonBSD said:
They don't appear to be on the bleeding edge as much as Linux
Click to expand...

FreeBSD out performs Linux in networking and holds its own for applications. FreeBSD does not jump on the latest fad if that's what you mean and prefers stability over throwing things together. But, as you said, everything one typically needs is there and performs as well or better on FreeBSD.
H

ralphbsz said:
X11 ran on BSD before BSD split into 386BSD, BSDi, OpenBSD, FreeBSD, NetBSD, and whatever else.
Click to expand...

With what OS was developed X11 at MIT?

People may also ask, since when has BSD internet.

isseeder96 said:
When did people start using bsd as a desktop?
Click to expand...

I started in '96 or '97 with NetBSD 1.2 from the Gateway CDs. Using fvwm2 as a DE an starting reading the kernel source. Marvels, can be read and understood. Tried that text adventure known as emacs, failed miserably. Good times. These days, one is more interested in the early retirement plan.

hruodr said:
With what OS was developed X11 at MIT?
Click to expand...

With BSD, of course. The X development was part of Project Athena. At that time (1984), they were running 4.2BSD on a number of microcomputers and minicomputers such as the DEC VAX-11/750.

People may also ask, since when has BSD internet.
Click to expand...

Since the internet started to exist, basically. Although, it depends on what you call “internet”. Personally, I regard the flag day on 1983-01-01 as the starting point of the internet, because that is the time when the ARPANET switched to the internet protocol.

4.2BSD in 1983 was the first UNIX system that supported the internet protocol (IP), via the famous Berkeley sockets API. In fact, the interim release 4.1a in 1982 already included preliminary TCP/IP support – at a time when the ARPANET still used NCP instead of the “modern” TCP/IP.

You can read about all of that on Wikipedia and other websites about the history of computing and networking. With just a little bit of research, you could have answered your questions yourself.
H

olli@ said:
You can read about all of that on Wikipedia and other websites about the history of computing and networking. With just a little bit of research, you could have answered your questions yourself.
Click to expand...

Rhetorical questions do not need an answer.
B

That's interesting. I'm curious though, was Wayland a solution to design issues with the X11 protocol, or the X.Org implementation of the protocol? I'm having a hard time understanding why Wayland (the protocol) exists in the first place.

Beastie7 said:
why Wayland (the protocol) exists in the first place.
Click to expand...