What is your favorite text editor?

I would like to know which text editor you use in FreeBSD, I like vim very much to program, for very simple things I usually use nano.

Which one is your favorite?

PD: This does not try to be a flame "emacs vs vim" just a nice debate.
D

I'm running a somewhat stripped down vim mostly for editing tasks, for the more complex ones I run emacs, and for some special editing jobs ed or se.

I've forced myself to learn vi(1). One of the major reason is that it's typically the only editor that's available on different Unix(-like) systems. So it's quite useful to know at least some of the basic editing commands. Now I'm starting to really enjoy vi(1) and vim(1). Muscle memory has gotten so bad I have many MS Word documents with :wq sporadically appearing in the middle of a page
B

The one I use most is the editor built into midnight commander, mcedit. I keep thinking I should learn emacs, but it seems very complicated, and what I do most with an editor is copy and paste a few lines in various configuration files. The frustrating thing about mcedit is that I can't find a way of copying lines onto the clipboard. Pasting works normally.
K

I use "tvi". Yeah basically a shell script running vi(1) in a separate tmux(1) window


Code:
And then to copy between buffers I use this hacky vi(1) mapping in my .exrc:

SirDice said:
I've forced myself to learn vi(1). One of the major reason is that it's typically the only editor that's available on different Unix(-like) systems. So it's quite useful to know at least some of the basic editing commands. Now I'm starting to really enjoy vi(1) and vim(1). Muscle memory has gotten so bad I have many MS Word documents with :wq sporadically appearing in the middle of a page
Click to expand...

The reason why I was most interested in vi / vim was just that! vi is pre-installed on any unix-like system. In addition, I really like the simplicity of vim, I prefer to use simple commands like ":wq"

Although I recognize that emacs is very flexible when installing extensions, each has its advantages and disadvantages.
C

-Snake- said:
vi is pre-installed on any unix-like system.
Click to expand...

So is ed, thanks to POSIX; however, with the rise of Linux, this is not guaranteed anymore. Gentoo, for example, had replaced vi by nano around 2006, Void Linux comes without ed as well.

My main editor is Kate.
I like very much that it has block marking mode (toggle between line and block marking modes with ctrl-shift-B).
This is not only useful for copy/pasting, but also for editing.
Try marking a block over a few lines and start typing... just cool
Other things I like with Kate is that it has sweet window splitting and does not annoy/distract me with "fancy" optics.

When in console, I use vi. But I don't like switching often between vi and Kate, because my muscle memory also has degenerated, like SirDice explained...

SirDice said:
I have many MS Word documents with :wq sporadically appearing in the middle of a page
Click to expand...

That on editors/leafpad or ctrl-s for saving on other editors.

emacs is for those who favor ncurses. vi is simply for pure text line editing.

I've always used vi, and if I have to use it on a linux box, the first thing I do is:

Thanks! Great tip! These colors are a real pain!

Joining in on the Gentlemen's Club, using vi. Vim has lured my interest a little but I have made so many other customisations that I haven't looked into vim yet.

"vi stand united" and so on.

I really like using ee to edit from the login terminal, but for practical purposes use editors/leafpad. I can use editors/vim but am a lot quicker and productive with leafpad.

When I write XHTML there is no need to retype what I've already done, and can have 10-12 instances of leafpad to work from open at once with ease.

I use vi 90% of the time. I don't even bother with editors/vim because I don't have a need for it.
For general purpose copy-pasting-etc while in Xorg, I use editors/leafpad.
For coding editors/linux-sublime is very nice.

There is a sublime3 port, but it does not start for some reason, so I tried installing the port you mentioned. That works indeed.
^R is sweet. Should suggest the Kate devs to add such.
However, sublime seems not to have split screen, a feature I cannot live without.

Regarding Kate, this is how it looks just now. When I tried it out first, I didn't think I would like it that much. 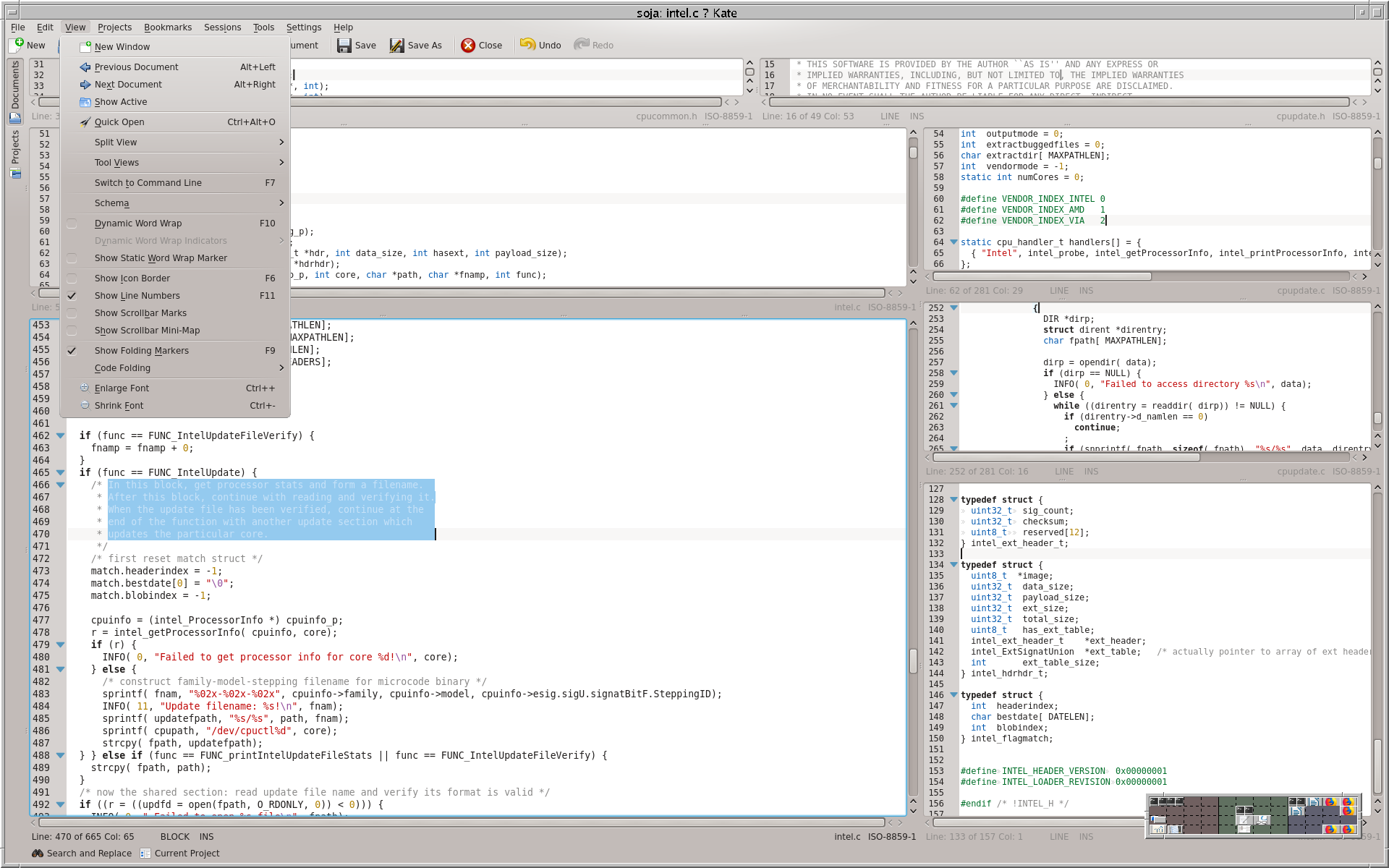 What I like with Kate too, is that it is the only editor (except of ancient Brief editor) I know of which is able to block mark, cut/copy and paste.
See the blue marked text block below the open menu. This is so convenient!
R

When I started using Unixes (about 29 years ago), I came from mainframe experience (on MVS that's ISPF and clones like Wylbur and Newlib, and on VM Xedit, which were all full-screen editors using the 3277 hardware) and from VMS (meaning edt and eve). I initially used vi for a few weeks, but the experience was nasty. I ended up instead ftp'ing files to the VAX and back for editing. A friend who already had ~10 years of Unix experience recommended this crazy editor that came out of MIT called "emacs", and it's been what I've used for the last several decades. I still can barely use vi; if I get stuck on a machine without emacs, editing is a big pain to me.

When I had to use Windows for serious programming work, I bought an emacs-emulator called "epsilon".

I've tried various IDEs (like the Borland Java IDE, and then eclipse). While I see their advantages, I've so far always ended up abandoning them, because they have such crappy editors built in. The underlying reason for this is probably that I'm very much a keyboard person; having to use a mouse (even a touchpad or the IBM/Lenovo "joystick" mouse) slows me down massively. This is likely because I've been playing the piano intensely since I was a child, so my fingers are very fast.

-Snake- said:
PD: This does not try to be a flame "emacs vs vim" just a nice debate.
Click to expand...

Oh yeah, vi or die (it even rhymes somewhat so I got to be right)

More seriously.. It is true that /usr/bin/vi is my main editor for most tasks. But I guess I am a little crazy like that because my ksh shell is even set up to utilize vi mode as well.

The reason is simple: I am lazy. These days all my servers are FreeBSD but back in the day I was working with Solaris, Linux, AIX and Windows. So we quickly made vi usage mandatory in order to have some consistency. I don't want to think about editors when I need to edit /etc/resolv.conf nor do I want others to waste time over that. So.. vi.

Even today I mostly use vi, I also have vim installed as well but it only gets used when I need to edit 2 files at the same time.

Snurg said:
There is a sublime3 port, but it does not start for some reason, so I tried installing the port you mentioned. That works indeed.
^R is sweet. Should suggest the Kate devs to add such.
However, sublime seems not to have split screen, a feature I cannot live without.

It's only recently that I've appreciated the differences between vi(1) and editors/vim, and although part of me would like a stripped back vi experience, I've gotten used to a number of small customisations in Vim and how certain things are displayed by default, so that is what I use day to day - specifically editors/vim-console (formerly editors/vim-lite).
One of the things I like about vi/Vim is that (almost) whatever system I sit down at, one of the is installed and is usually the default $EDITOR.

While I use Vim for pretty much everything, I do switch to editors/texworks for writing LaTeX documents.

I also use vi mode within my shell (shells/zsh), because it just seems too useful not to.
P

The text editor that I use on FreeBSD is Emacs (I also use it on Windows, macOS, and Linux (I version control my configuration for a consistent experience)). It's by far the best editor IMO but only if you customize it via Emacs Lisp (by installing packages (libraries) or writing your own code; this is what I do) or if you use a pre-configured version like Spacemacs (crowd sourced configuration with an integrated vim emulation layer with support for many development environments). The nice thing about Emacs is that you can edit files on servers (using SSH via TRAMP) without leaving the text editor so you do not have to know how to use vim or nano.
M

Acme, and occasionally sam or ed.

See the acme screencast at
https://research.swtch.com/acme

Acme and sam are very (three-button-)mouse-centric in a way that, to this user, feels exactly right, especially if sam is patched to use acme's mouse chords; and the edit commands work with structural regular expressions.

Both were written by Rob Pike and are included in the Plan 9 operating
system. For FreeBSD they are available through devel/plan9port, or
directly from https://github.com/9fans/plan9port.

Snurg said:
What I like with Kate too, is that it is the only editor (except of ancient Brief editor) I know of which is able to block mark, cut/copy and paste.
See the blue marked text block below the open menu. This is so convenient!
Click to expand...

Of course Emacs can do this too if you enable cua-selection-mode ;-)
P

Check out Emacs Rocks if you want to see some cool examples of Emacs in action (http://emacsrocks.com/).
C

My first exposure to Unix was in the early nineties with Sco Unix. Of course it was vi for text editing. As the first editor I learned for Unix it's been hard to abandon for me. I call it vi hell when I fat finger commands. It's been to hard to break away from it, so it's what I still use. Of course there's variants, right now I'm using vim. At some point I'd like to get used to something possibly better, but I always fall back to vi.
You must log in or register to reply here.
Share:
Reddit Pinterest Tumblr WhatsApp Email Share Link
Top