ZFS will be more forward-looking (for system upgrade and other purposes).

If you chose guided installation, and if there's just one internal drive: there should be no remnant of Windows.

Worth mentioning is that it has also caused non bootable systems due to bootcode changes so you need to be a bit careful about running it on rootfs and encryption support isn't complete (booting).

FreeBSD bug 255318 – handbook: Document how to update the bootloader

For the benefit of people who do not have a full subscription to freebsd-announce: Pau Amma invites responses to his e-mail: The FreeBSD Foundation contracted me to develop a prioritized plan for improving and updating the FreeBSD Handbook. For the first stage of this project, I have...

I'm interested in which display driver is used on the p50 of the three or so
available, and the configuation which ends up working nicely for xorg.
T

I have a second hand x270 (it's running OpenBSD). Reds are very dull, generally not nice but fine for xterms.

But I've seen that same thing (dull reds) on a brand new nokia phone so who knows...
OP

Hi,
I’m just posting briefly because it’s been a bad day...
So, graham, yes there definitely is something odd going on with the disk drive(s), I’ll get back to you with the results of those commands. (I’m writing this on my phone).
When I said “Windows was still lurking” I only meant that the FreeBSD installer had appeared to work - not that it had worked. In any case there is still an option of Windows in the f12 triggered boot menu, I don’t know what it does (if anything) and I’m certainly not going to select it. I don’t know if anyone has any thoughts on that?
@jbfvwm2, I tried the i915kms driver initially and I got X and KDE running, but KDE’s compositor kept crashing (about once per hour or if I logged out of KDE, almost guaranteed a crash). So I’ve now installed nvidia-driver with pkg. At this point KDE kept crashing, leaving me with a blank screen with just a white block cursor at the top left. I fixed it by turning off “hybrid graphics” in the BIOS. This means it uses the nVidia all the time but frankly after fighting with x all day I’m happy to concede to that. If it proves stable I will happily post my xorg.conf.d files, they’re actually very short.

Thanks, maybe begin separate topics for the issues that are unrelated to Thinkpad display quality (it'll help future readers).
OP 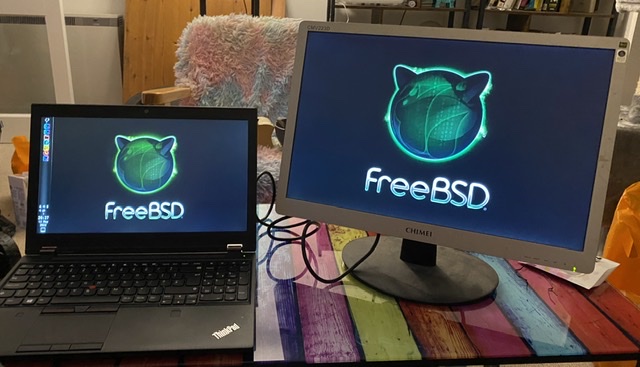 Just a little more info in case anyone else is thinking about buying a p50.
I got it hooked up to an external monitor (via HDMI) as you can see from the picture. I didn’t even need to edit any configuration files. After I installed KDE I just plugged the monitor in, typed “startx” and it worked! Cracauer@ - maybe your issues were due to faulty hardware or something in the BIOS? Or using the Intel graphics instead of nVidia? It seems strange.
I couldn’t get the acpi_ibm driver to control the keyboard backlight, however you can toggle it with FN+SPACE (you get low, high and off settings). The volume and mute keys work in KDE but brightness doesn’t. However, there is a workaround - just use the xbacklight command. WiFi seems to work. I’m fairly sure you can turn the WiFi on and off with a function key... I can’t check at the moment because my cat is asleep on me. USB works including type C as expected but I haven’t tried it with a display yet, just a memory stick.
The display is fantastic - compared to my Thinkpad x220 it’s like night and day. Plentiful viewing angles and nice contrast. Also and this was a surprise... audio via headphones is significantly better on the p50. I can only imagine that my x220 has really bad digital to analogue converters.
I would highly recommend this notebook for anyone who wants a (somewhat) mobile workstation with FreeBSD.

AlexanderProphet said:
… a workaround - just use the xbacklight command. …
Click to expand...