I use MATE desktop and that comes with x11-wm/marco. I've noticed some minor (yet annoying) glitches with the window manager which are especially visible on a multiple display setup. I have 4 displays. Three are 1920x1080 arranged in a row, and the forth is a 3840 x 2160 on the top center. If it's at all relevant this is FreeBSD 12.2-RELEASE p4 64-bit, MATE desktop 1.24.1, and an NVIDIA graphics adapter. The only thing I have in my xorg.conf is (under /usr/local/etc/X11/xorg.conf.d/driver-nvidia.conf)


Code:
There are two issues that plague me:

This first is when I move windows between screens. The window will 'shift" underneath my mouse cursor as it crosses over to another display. If the window was resized before moving (doesn't matter how long ago) it will also shrink down to it's previous size while also getting shifted. This one is really difficult to reproduce but occurs often. I don't think it's random, but I have yet to figure out the pattern. I'm suspecting it's time based.

The second issue is of window placement. It doesn't seem like it's very intelligent and doesn't always remember positions. I've noticed this more with non-GTK and non-Qt apps like Firefox and Thunderbird. Positioning of the window follows the mouse cursor, even if I've previously opened the window/app. When I talk about "being opened previously", I mean this as "since the installation and first login" of the system. Ironically, with new windows (ones that have never been opened before), they get placed at the top left corner of the top screen.

There are other issues such being unable to move VirtualBox windows, disappearing desktop icons (a known issue due to the positioning of screens that should be addressed by this), and window focus.

Can you provide the output of nvidia-smi?
OP

Here are the models as detected by Xorg. (They are correct).

Interesting that the GPU has two addressable GPUs yet all displays are on the same GPU. I've seen this in Quadro cards however displays a split between the two GPUs.

I wonder if there's any type of issues with having two GPUs yet only one is being used. Normally if it was split between the two you would need to use TwinView (old nvidia tech) or Base Mosaic (newer tech) to stitch the two GPUs into a single desktop.

You can freely drag windows between all displays? Any chance $DISPLAY is different on any of them or is it all :0?

I'd recommend moving that .conf file out of the .d dir and xorg.conf if it's there, run nvidia-settings, X Server Display Config., Click Advanced Button. Is there an Enable Base Mosaic checkbox under the GUI display layout? If so is it checked? If not check it, setup the display layout by dragging the displays, save xorg.conf, restart X. Do you see any difference?

If you don't have a Base Mosaic option it doesn't seem the ppi between the displays is large enough to really notice however atleast for gdm on Xorg/gdm should be setting a proper dpi via Xft.dpi. Any chance you're changing that in .Xresources or .Xdefaults? If not any using Base Mosaic isn't an option or doesn't show any difference then I'm out of ideas other than maybe your GPU is bad.
OP

I probably should have mentioned it in my first post. I do have two GPU's but only one is active. That's the reason behind having that xorg.conf.d/nvidia.conf file. Without it X11 gets confused by the two GPU's and fails to start. I figured that out from a post I found in these forums.

No .Xresources or .Xdefaults, just an .Xauthority file:


Code:
Here's a screenshot of the NVIDIA X Server Settings as it is currently configured (after hitting the advanced button): 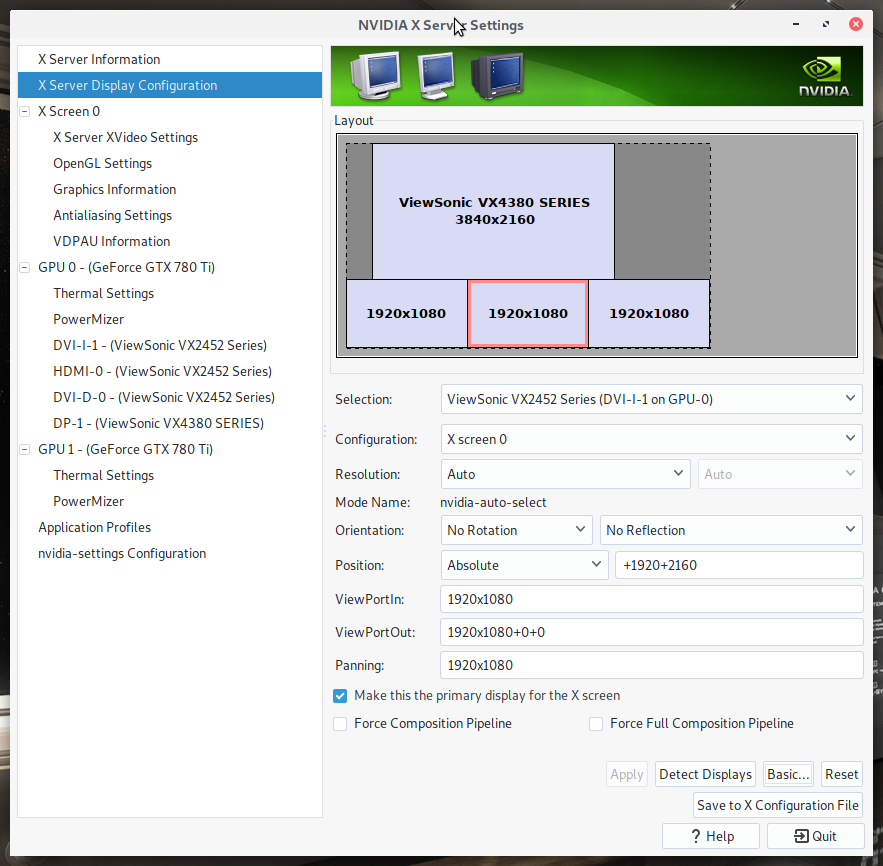 I don't know how to check for the $DISPLAY variable, but I am freely able to move stuff between displays. Except of course for this glitch.

Ok so that better explains the smi output. Since they're all on the same GPU BaseMosaic won't be an option. So no checkbox.

When does the window shift? Only when dragging from the top display to the bottoms or when drag between any combination?
OP

Ah, I didn't remember about xrandr(), but now that you mention it I do remember setting that up sometime in the beginning using x11/arandr:

Code:
I don't remember why I used that approach instead of the NVIDIA tool. Maybe it's because I read somewhere that it's best to avoid having an xorg.conf file? Anyway, I'm fine going the xorg.conf route if that works better. I'll try that as soon as I get a chance to tinker around with stuff.

I don't think I've ever ran into the windows shifting issue when dragging stuff between the top screen and the bottom ones. But I hardly ever do that anyways. Most of the moving occurs between the three bottom screens, and the problem occurs no matter which direction.

Yeah, there's something odd going on with the way nvidia-setting is seeing the current layout and the way that layout is executed in that xrandr command. That is unless if you moved that 4k display in the rendering then took the screenshot?

Based off the command it seems it would be

But it seems the 4k is shifted.

xrandr order can sometimes be crazy. Just drop/drap/snap the displays and let nvidia-settings generate the xorg.conf

What are the chances mate is using ~/.config/monitors.xml?
OP

Generated a xorg.conf file and moved away ~/.screenlayout/layout.sh.


Code:
It's better so far in that my login screen now has the monitors arranged correctly
But.. something was still applying a layout after I logged in. After checking around I found ~/.config/monitors.xml. I moved away the file, tried again, and this time the layout from the xorg.conf was sticking.

Ok so I think that's the problem then the ~/.config/monitors.xml file. If you insist you might be able to change back the xrandr if you choose. I always like to use nvidia-settings when possible if it's a not a 1xN layout.
OP

Maybe it's the mouse? I have a Logitech G903. I'll try using another mouse for a while.

It's possible you can go the other way around too... remove the xorg.conf return the simple .d file with the 0:1 pciid and fully config the displays with mate's tools that generate monitors.xml.

It sounds as if there's overlapping displays. mate/gnome has a really bad track record with totally trashing existing xorg layouts then applying their own. You might have to ditch xorg.conf and use their tools to configure it.

1290448 – mutter is changing monitor layout from that set by xorg.conf

I know Red Hat patches gnome products to keep xorg.conf compat around but I wouldn't be surprised of it didn't get changed upstream.

btw if your display out from monitors.xml isn't applied during gdm you need to copy ~/.config/monitors.xml to ~gdm/monitors.xml all users (gdm runs as the gdm user... I think on freebsd too) need to have their own display layout.

Can you try something that's not mate/gnome/gdm with the purely xorg.conf config?
OP

I use x11/sddm (something to do with .login_conf not be read in other display managers). It looks like (according to this page) I need to put a script in /usr/local/share/sddm/scripts and enable it in /usr/local/etc/sddm.conf.d/my_config_file.conf. I'll go ahead and try that.

(also, it's not the mouse, got the same thing with this other one.)
I can also test out NomadBSD to see if I get the same problem.

EDIT: Also just noticed that the xorg.conf kinda messed around with my Wacom tablet, so definitely going to go back to using monitors.xml
OP

I think I might have an idea. I tried to move a windows across the screen really slow and noticed that it sticks to the edge for a moment and has some resistance. Though it doesn't explain why the glitch is not consistent.

tuaris said:
I can also test out NomadBSD to see if I get the same problem.
Click to expand...

Using a different distro might be a bit extreme here. I would just remove mate for the time being and try a wm that doesn't touch any layouts or have any fancy features. Try fvwm and see if it's isolated to mate/macro.