Re: <https://bugs.freebsd.org/bugzilla/show_bug.cgi?id=259679> I performed the patch, then added this line:

Built, packaged, installed, X11MON is off:


Code:
What am I doing wrong?

grahamperrin said:
Re: <https://bugs.freebsd.org/bugzilla/show_bug.cgi?id=259679> I performed the patch, then added this line:

Where did you find this weird syntax?

This alternative works for any make variable you want to set specifically for one port. But don't use it to set options any more, as this is directly supported by the <category>_<port>_(UN)?SET variables, which is much more readable.
OP

I see that net_opensips31 is an options name <https://www.freshports.org/net/opensips31/#options> but how does a person learn what to do with it?

Now looking at <https://docs.freebsd.org/en/books/handbook/ports/#ports-poudriere> I remember trying to make sense of that subsection long ago, I find it horribly confusing.
OP

Also, I can't make sense of parts of the manual page for poudriere-options(8).

In the synopsis, what's meant by this?

I mean, what (for example) would one enter in its place?

I have recently been playing with ports-mgmt/poudriere. I am trying to set some build options and there seem to be different ways how to do this. For example, if I want to build net/samba36 without CUPS I can A. Edit make.conf (whether global or per jail) 1. WITHOUT_CUPS=yes or 2...

Indeed. Sometimes documentation is terrible. Was same with flavors of ports.
OP

Partly related, I probably subscribed a few weeks or months ago:

… (I never used ports-mgmt/portconf, and so on.) … Note to self: make.conf(5) uses the standard makefile syntax.
Click to expand...

(I'm not a developer; documentation that assumes developer expertise will be lost on me.)

(I'm no more a porter than I am a developer. I see a wall of text.)

Does anything in Chapter 5 stray from standard makefile syntax?
Last edited: Nov 9, 2021
OP

This is understandable enough:


Code:
– instead, I can/should use poudriere-options(8) to set what's required.

PEBKAM: I can not figure out how to use -n when setting instead of showing, so I choose to abort (Control-C) when there appears a succession of dialogues:
Then, housekeeping:


Code:
If I abort quickly enough, I can get this (before housekeeping):

I'd like to use that file (instead of /usr/local/etc/poudriere.d/options/deskutils_recoll/options).

Is OPTIONS_FILE_SET+=X11MON suitable, standard syntax for part of what must be written to the make.conf?

man just read my post and do it like that. You're writing walls of text about something dead simple...
OP

grahamperrin said:
PEBKAM: I can not figure out how to use -n when setting instead of showing,
Click to expand...


grahamperrin said:
In the synopsis, what's meant by this?

– can anyone help with either of those things? Thanks.

The synopses at <https://www.freebsd.org/cgi/man.cgi?query=poudriere-options&sektion=8&manpath=Ports#SYNOPSIS> look quite different from the synopsis that appears in response to poudriere options.

I can't recall where it was learnt/taught.


Honestly, I'm parroting stuff into configuration files without properly understanding the reasons for syntaxes being as they are … the dyslexic side of me will probably never clear the mental block that began after trying to make sense of <https://docs.freebsd.org/doc/12.1-R...reebsd/en/books/handbook/ports-poudriere.html> or however it was written at the time (I knew nothing about jails).
J

grahamperrin said:
PEBKAM: I can not figure out how to use -n when setting instead of showing, so I choose to abort (Control-C) when there appears a succession of dialogues:
Click to expand...

I'm not sure I understand the question, but here goes anyway. Have you tried poudriere options -ns ...?


grahamperrin said:
In the synopsis, what's meant by this?
[poudriere-options]

I mean, what (for example) would one enter in its place?
Click to expand...

This is a standard man page-style command description. It's formatted strangely on Github. The online man page for poudriere-options(8) is much clearer. The fact that you're specifying options for an options command probably adds a little to the confusion, too.

The poudriere(8) command itself takes options. E.g. "-A Force color support, even if not in a TTY."

Then the poudriere-options(8) command also takes options. E.g. "-s Show port options instead of configuring them".

So you could conceivably want to run something like this if you hate colorized output like I do poudriere -N options -ns deskutils/recoll.

Zirias said:
Where did you find this weird syntax?

I've seen both styles used in make.conf... and I have to say, the first one makes a LOT more sense. The second one looks like it was borrowed from /var/db/ports (where the per-port options get saved).

It makes no sense at all, as make.conf is just included by make. how should you ever sensibly evaluate a variable called X11MON defined to a value of on += deskutils/recoll with make? No, I really wonder where this idea is coming from. It doesn't work (no surprise!) for sure.

This is why I avoid make.conf, and stick to per-port make config.
E

grahamperrin said:
Also, I can't make sense of parts of the manual page for poudriere-options(8).

In the synopsis, what's meant by this?

I find it confusing as well.


Jose said:
[...] So you could conceivably want to run something like this if you hate colorized output like I do poudriere -N options -ns deskutils/recoll.
Click to expand... 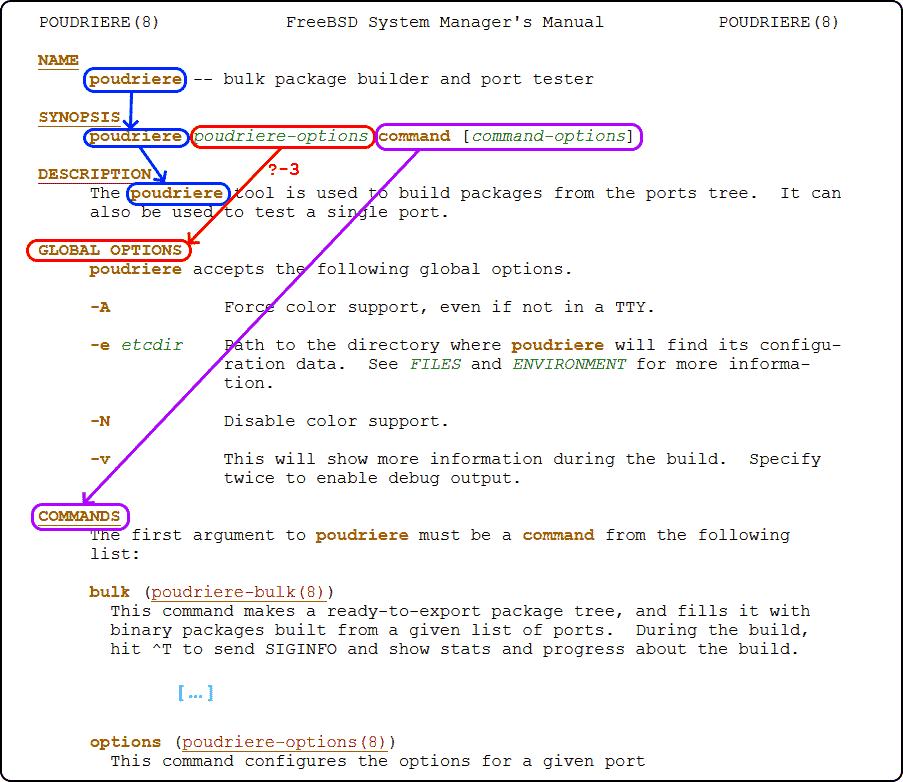 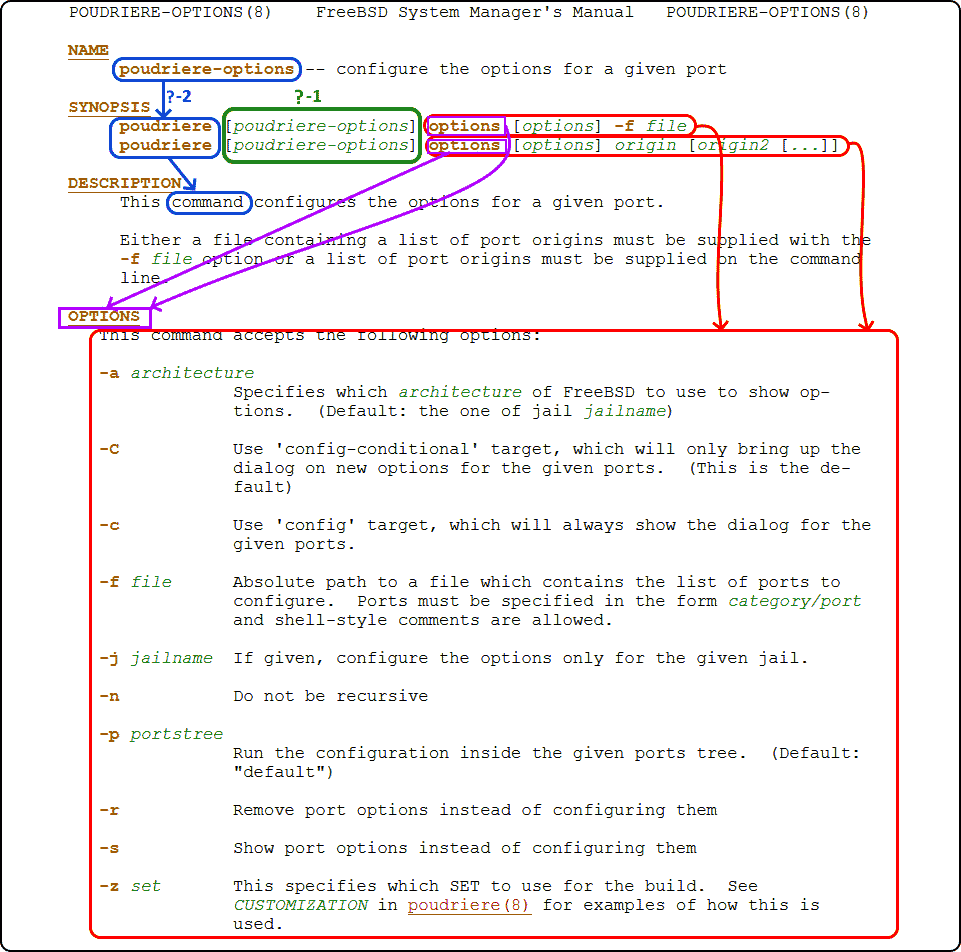 IMO, it can also be unclear that in the NAME section of poudriere-options(8) the following string is written as:
poudriere-options This is not the actual command that is to be typed in. Compare for example:
Because of the (complex) syntax of poudriere(8), its man-pages are split into several man-pages and you have to use a unique name for a man-page; however, this gives rise to ?-2 ambiguity in the image of poudriere-options(8) above. pkg(8) faces similar difficulties and is also split up. That might have something to do with the naming conventions or limitations of man-pages.

Firstly, however, note that with pkg(8) there is a subtle but significant difference. pkg(8) is also split up into seperate man-pages, for example for the incarnation pkg‑info(8) (as mentioned in the SEE ALSO section of pkg(8)). The man-page of pkg‑info(8) is tagged by the string "pkg-info" but, at the NAME section of pkg‑info(8) it correctly uses the string pkg info (note: no dash between the two words), which string (=pkg info) is also used in that exact same way in all other sections.

Secondly, compare with pkg-static at the NAME section of pkg(8) as an alternative name. pkg-static functions as an exact synonym of pkg. Here the dash between the two words is mandatory.

At the SYNOPSIS section of poudriere(8) there is a part poudriere-options These options are not described by a similar name in subsequent sections. They appear to be described in the section GLOBAL OPTIONS (see ?-3, in the image of poudriere(8) above). If this is the case, why are are such different terms used to indicate the same item?

If I understand Jose's description correctly, at poudriere-options(8) in the section SYNOPSIS the string [poudriere-options] (note: the presence of the two "[" & "]") is not described in poudriere-options(8) but is described in the section GLOBAL OPTIONS of poudriere(8). If this is indeed the case, I do not find that self-evident. The name change into "GLOBAL OPTIONS" does not help. I have not seen any other man-pages where you have to cross reference to find a description of a certain item for which there is not an expliciet cross-reference present. I may be wrong; if so, I'd appreciate examples where that is the case.

This could be reworded as:
<command> must be one of the following list:

This also begs the question if, instead of the command/argument options, something like useopts or portoptions would not have been a more apropriate term, not clashing with the terminology option(s) used pervasively in man-pages.

Perhaps this (differences highlighted) is clearer: 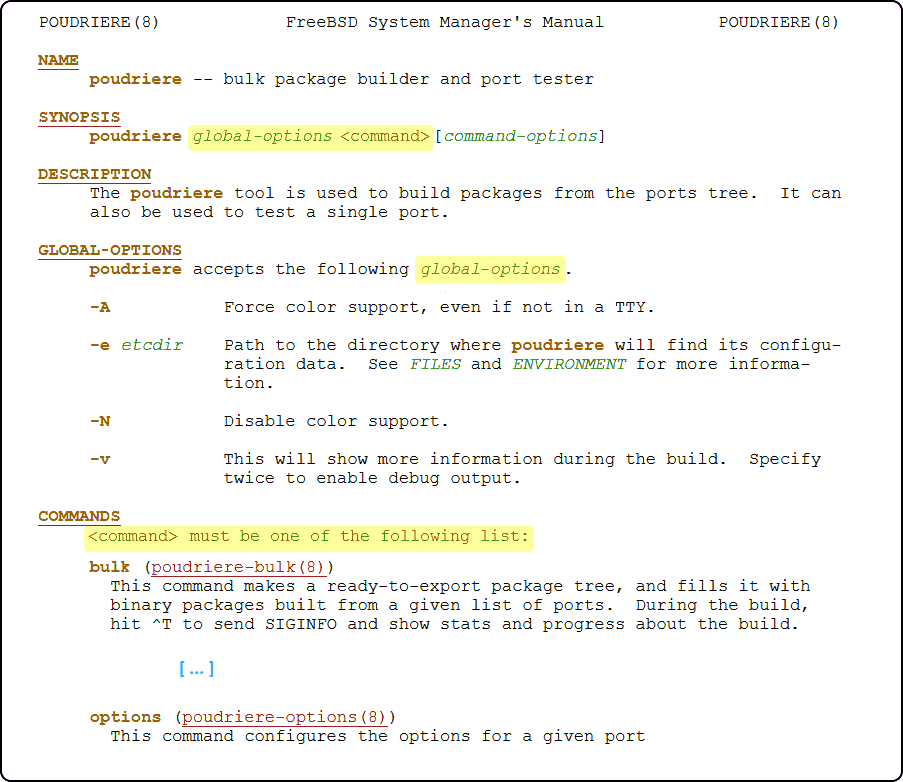 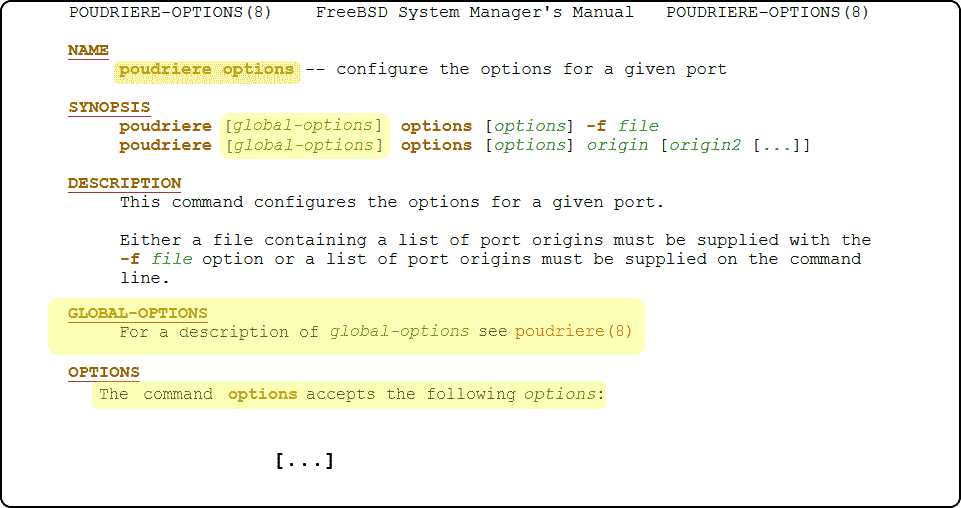 YMMV, I find the originals on GitHub easier to read.

They're certainly easier to reference.

grahamperrin said:
… I know to not run make config …
Click to expand...

That single red arrow beneath the heading POUDRIERE(8) was enough for an immediate, at-a-glance realisation. Big thanks.

With one less source of confusion (word blindness ending), other things began falling into place.


grahamperrin said:
… PEBKAM: I can not figure out how to use -n when setting instead of showing, …
Click to expand...

-c to show the dialog for the given ports.

– works perfectly, although I'll probably not make a habit of this approach. The presence of directories at /usr/local/etc/poudriere.d/options is too easily forgotten.

Yep, global option -N suppresses colour, although (below, bottom left) I prefer the colours to be visible. They help me to see things.

Suggestions for enhancements to manual pages can be made in GitHub.

Jose said:
The poudriere(8) command itself takes options. E.g. "-A Force color support, even if not in a TTY."

Then the poudriere-options(8) command also takes options. E.g. "-s Show port options instead of configuring them".
Click to expand...

I've been studying that documentation, as well, since July. And my understanding of poudriere-options (as posed by Erichans in post #19) is for automating the management of per-port options that are found in /var/db/ports/. From poudriere(8):

What I'm curious about is whether /usr/local/etc/poudriere.d/options should be empty or not. The way the manpage is written, I could take it to mean either of the two scenarios:
So, is 1 or 2 correct, or am I on the wrong track altogether?
OP

astyle said:
whether /usr/local/etc/poudriere.d/options should be empty or not.
Click to expand...

It can be either.

Removing the directories was harmless. In the absence of the options file within each directory, poudriere behaves as if poudriere options … has not written to the area.
OP

Confirming that a poudriere(8) global option (in this case, -e) is applicable to a poudriere-options(8) command:

eternal_noob said:
… How do i enable another flavor with poudriere? …
Click to expand...

As far as I can tell make config does not support FLAVOR at all. It all just goes to 1 directory. I think we should fix that in ports and here.
Click to expand...