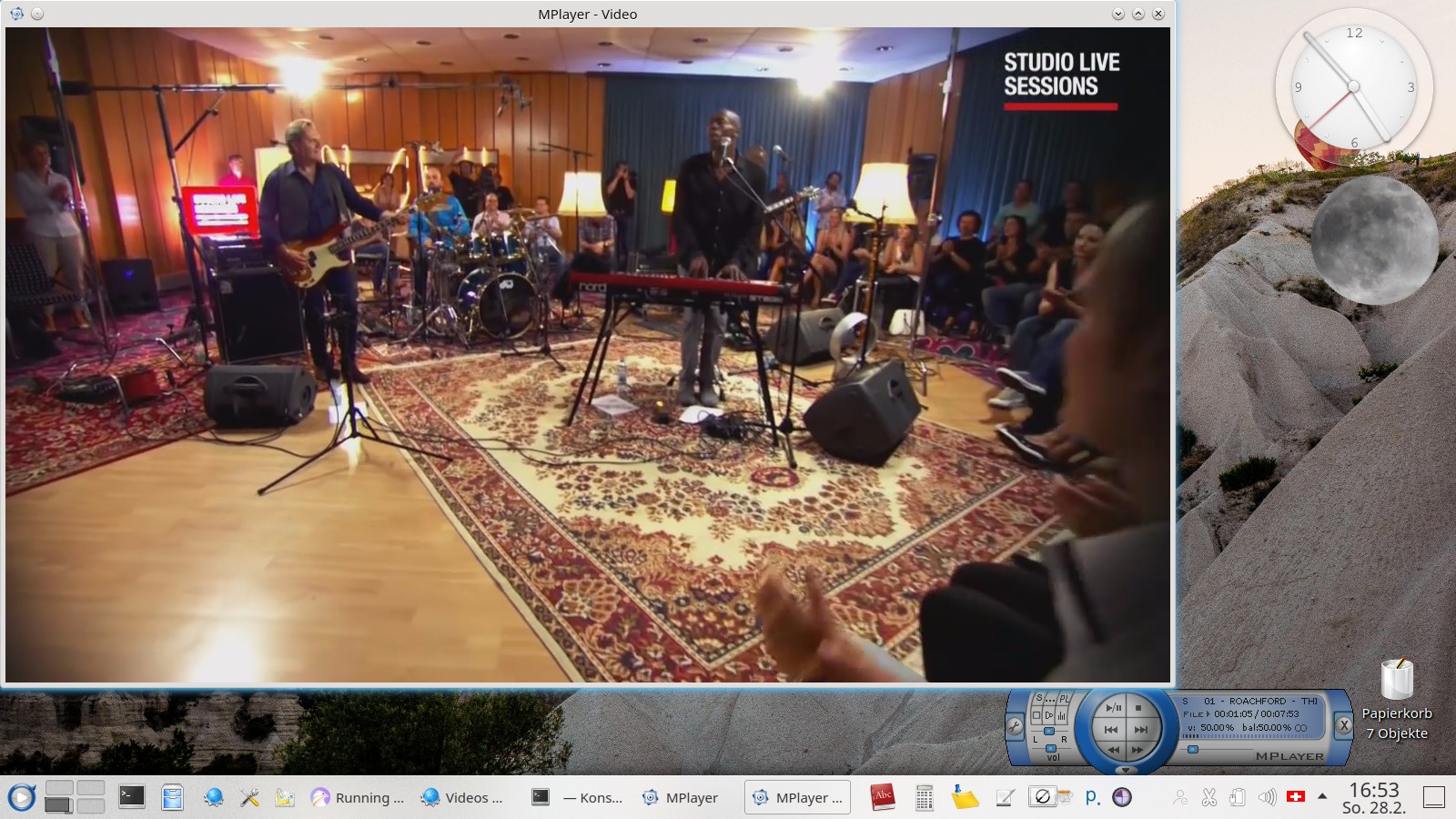 KDE-plasma 5.20.4 · KDE frameworks 5.77.0 · Qt 5.15.2 · Date: 2021Q1
Global Design: changed from default Breeze to oldschool Oxygen
Plasma style: changed from default Breeze to oldschool Air
Application style: Oxygen? inherited from Global Design? (can't lookup, the control center crashes when I click that item)
Color Scheme: Oxygen cold
Desktop background: Picture of the day from Unsplash Wallpapers (automagic daily download)
I think that's some touristic spot in Turkey? 7 baloons are flying...
The Control Panel @bottom hides after a second, it's visible because my mouse is there. The weather applet (mini programs in KDE terminology) is updated every ½h & didn't have sync'ed yet, when I took the screenshot. The band I'm listening to, so that my neighbor's are sure I'm still alive & doing well, is Roachford - This Generation

Is this KDE5?
I ask because I am currently trying it out how it looks and works, and I am wondering why under SystemSettings->WorkspaceBehaviour->VirtualDesktops I can see only the possibility to order virtual screens in a row, but no longer in columns also.
Which I find quite stupid, as the window boxes in the task bar get really small, to the degree of unselectability.

But luckily KDE still supports changing screens by just moving the mouse over the screen boundary, so the functionality has not been completely lost...
The taskbar is also somewhat unstable, it likes to crash on me. No idea why...

Snurg, I edited the post to include that info.

Virtual desktops: don't know. I can tell it should have two or more rows,

Yes, unfortunately the control panel (it includes a taskbar) hangs occasionally. When I mitigate my procrastination demons, I'll try to help with the issues that bug me the most, incl. this one. Basic things like that should be rock solid; I'd rather trade some functionality for robustness. Did you build from ports? Maybe try the packages?

When trying to find out the KDE version, I found that for some reason the ALT key does no longer show the menu, and so I ended up using KInfo. 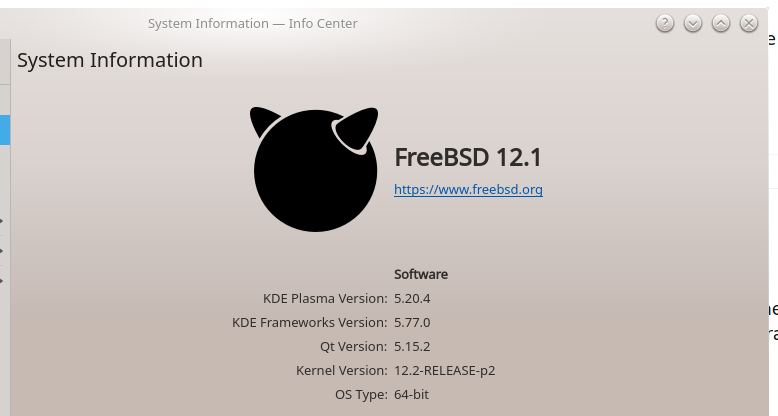 This confuses me a bit because the output of uname -a is more what I expected.

Code:
I have changed the settings to be like yours, but I still do not get an option to define the pagers' column width.

If I am informed correctly, the KDE5 port has been done almost solely by one person.
It is obvious that detail testing and debugging is impossible to do as single person.

For this reason I really would appreciate some sort of Kommunity effort, so people can join together, develop some testing framework (KDE stuff built with symbols, (call)stack trace and the like) that makes it easy to collectively isolate bugs, develop fixes, test them and making pull requests for tested and proven patches.
Probably the most difficult problem is to make this in a way so easy to handle that people can contribute, even without thorough knowledge of the ports system, building and debugging apps.

Maybe this would be easier if there is a triage hierarchy of bugs, so this does not end in a long list of issues like in bugzilla, by focusing on some component until its worst issues are fixed and some other component becomes the main offender. With such an approach, I guess the start bar issues possibly would be the first thing to focus on.

We're hijacking this thread... given that it's low volume, I guess that'd be ok, but maybe it would still be better to open a new thread "KDE@FreeBSD is maintained by one (!!!) lonesome maintainer" to get more attention. Where did you get that info?

IMHO the greatest effect is to help this lonesome maintainer within the existing infrastructure. That's more or less what you would likely eventually evolve for yourself when you do such tasks. The 1st steps are slow and clumsy, then it goes quicker etc.pp. See it this way: this infrastructure & proven workflow is so effective, that it enables one guy to maintain well over 200(?) ports that make up the best fully integrated DE.
EDIT the big heading "FreeBSD 12.1" in the info center may either be left over from the previous version (forgotten to be updated), or the packages are not fully built yet - some prerequisit port that doesn't build consequently stops all of it's dependents from building the latest revision.

Snurg said:
… If I am informed correctly, the KDE5 port has been done almost solely by one person. …
Click to expand...

That's an interesting and unusual setup, I'd say.

Looking at the older posts in this thread, it's nostalgia I wish i was around FreeBSD and KDE long enough to say I experienced it first hand...

MasterOne said:
about the host system
Click to expand...

Is that a network manager in the systray?
Click to expand...

Not in the shot above.

I normally use GhostBSD NetworkMgr net-mgmt/networkmgr however there's not yet a fix for the port to FreeBSD:

What are the other apps in the systray?
Click to expand...

HPLIP Status Service, which I never look at. Probably part of print/hplip

LanguageTool, configured to work with the local server (not the default online service).

The playback icon, I don't know. Maybe a feature of Plasma.

The paper aeroplane was probably Telegram, which I stopped using after a few days.

Other items are probably features of Plasma.

I don't normally run FreeBSD in a virtual machine, I was probably testing VirtualBox at the time.