Returning to BSD after 25 years (altho' MacOS is not that far away from BSD) I've had to settle on Debian to get some work done. I've got FreeBSD_12.1_RELEASE running in VirtualBox and I can run nearly all the user applications I need. But when attempting to install on bare metal it seems I may have made a bad choice of hardware: Huawei Matebook-13S. The graphics ought to be covered by the i915 included in graphics/drm-kmod, but to get there I need a network connection. Yes I've got a TL-WN723N-v2 usb dongle but I don't want to start thread drift about that. I'm not really a programmer, only a part-time masseuse of Makefiles... I've started to read Thread a-guide-for-intel-wireless-adapter-ac-9260-and-9560-driver-installation-on-freebsd-12-1.74475 I'd like to offer myself for beta testing or any other useful thing I could do, am I presumptuous in thinking 9260 is replaced by 9df0 on my system? Or should I just sit and wait as suggested by rtw88: RTL8821CE 802.11ac PCIe Wireless Network Adapter support ? fwiw my wifi reports itself as

lspci -vv on Debian gives the same, maybe more, in a different language...

The Intel Cannon Point-LP CNV1 wifi is a Intel 9000 series, 9560 in this case, device. From Linux kernel source iwlwifi driver:

That wifi device is not supported under 12.1-RELEASE, but on development versions 12.2-BETA1 and 13.0-CURRENT) by the iwm(4) driver [1] [2]. You should prefer 12.2-BETA1 over -CURRENT, the latter is not supported on Forums and it can breake from revision to revision:


23.4. Tracking a Development Branch
OP
B

Thank you Sirs. The 13_CURRENT looks exciting but will take me a few days to get organized in my low bandwidth environment here. I had found another thread (didn't bookmark, can't refind where it was claimed 12.2_BETA1 worked for him. So I got the _boot-only.iso to try. Yes, the installer found my wifi as
iwm0 Intel(R) Dual Band Wireless-AC 9560. It configured dhcp sensibly, contacted the server and downloaded the minimum kernel and base, but seemed rather slow. Sorry I can't tell whether that was misconfiguration or upstream throttling. I'm confused about 9560 versus 9df0. I saw some complaints on bugzilla about the confusion between marketing names and device names.

Further info: this 12.2_BETA_boot-only.iso can find my wifi only after a cold startup. Warm restart, either from Debian or from this .iso on a usb stick, has no network adapter found...

Another problem: after the boot-only installer finished and rebooted, I had no network. As in ifconfig reported only lo0. If I used the iso as Live-CD it did not find my wifi. I assume the installer script is loading every driver in the box until it finds one that works, and the Live-CD waits for the user to load one manually. So why can't the installer write the necessary instructions to the installed system disk?

Then what does this hw-probe mean on a Lenovo ThinkPad T590 20N4CT ?
T

bessie said:
Further info: this 12.2_BETA_boot-only.iso can find my wifi only after a cold startup. Warm restart, either from Debian or from this .iso on a usb stick, has no network adapter found...

Another problem: after the boot-only installer finished and rebooted, I had no network. As in ifconfig reported only lo0. If I used the iso as Live-CD it did not find my wifi.
Click to expand...

What exactly do you want to know?
OP
B

T-Daemon said:
What exactly do you want to know?
Click to expand...

Yes, exactly my problem, and I've got more similar. I will add to that bug report. My problem appears to be related to whatever is plugged into the USB Type3 port.
T

The status says "works" but with a warning sign under. If you hover the mouse over the cell a text window is shown "This device model is known to have problems".

9560 is the vendors product name, 9df0 the chips identification.
OP
B

Thank you T-Daemon. Sorry I have another silly question: I've RTFM and Googled, but can't find how to get dmesg or something else to show me the boot log with timestamps in microseconds. less /var/log/messages gives a prettified human readable form with Date-Time-Hostname-OS prefixed to every line, but accurate only to one second.
T

bessie said:
Sorry I have another silly question: I've RTFM and Googled, but can't find how to get [BGCOLOR=#dee3e7] dmesg[/BGCOLOR] or something else to show me the boot log with timestamps in microseconds. [BGCOLOR=#dee3e7] less /var/log/messages[/BGCOLOR] gives a prettified human readable form with Date-Time-Hostname-OS prefixed to every line, but accurate only to one second.
Click to expand...

That's not a silly question, that's a very good one.

This overrides the syslogd flags in /etc/defaults/rc.conf, /var/log/messages will now show the time stamps down to the microsecond.
OP
B

Indeed it does, for 12.1-RELEASE as a Vbox guest. But for 12.2-BETA on the SSD it does nothing. Ah well, such are the perils of beta software... I was trying to pin down a race | contention issue that seems to be happening, if a probe on the USB bus happens while the iwm firmware is loading, then the load fails. uhub0 is a PCI-e device, but there ought to be locks to prevent bad things happening...
T

bessie said:
But for 12.2-BETA on the SSD it does nothing.
Click to expand...

Please check for typos. On a VirtualBox VM installation the syslog flag has the expected result, notice uname and grep down below: 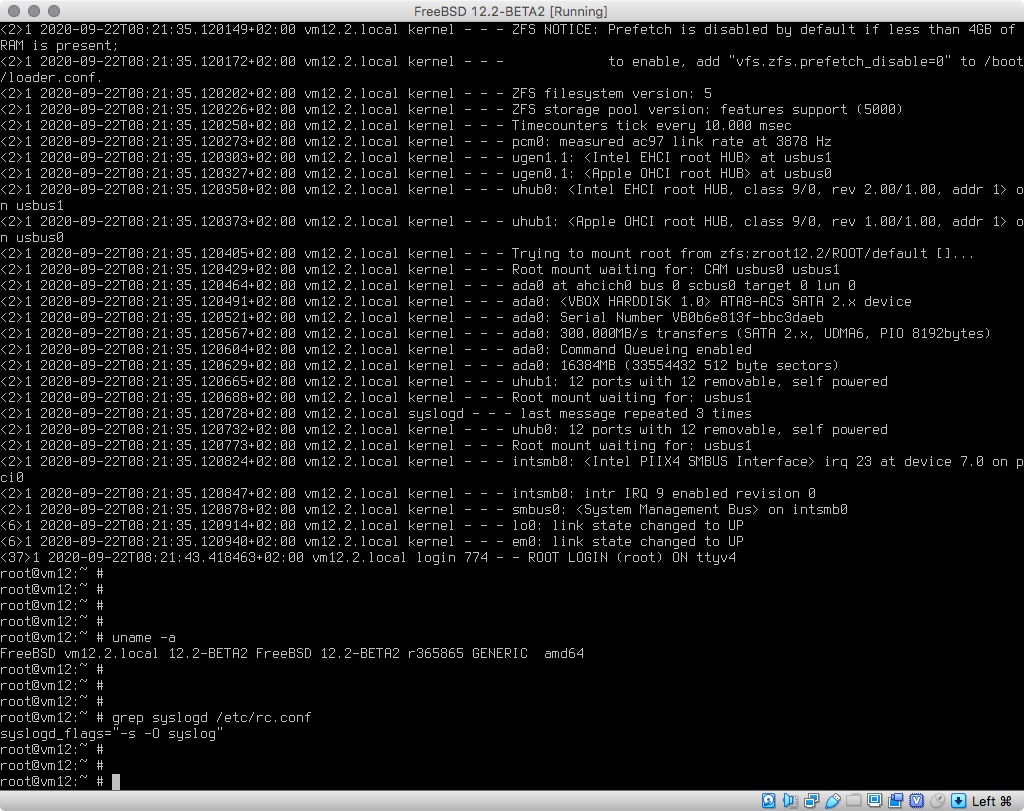 I don't think the behavior is different on a bare-metal installation.
OP
B

Must be one of those warm reboot things. After shutting down and leaving it off overnight I get the microsecond display. Now, back to the original problem: From warm reboot, or cold start with anything in the left hand TypeC USB port which is the one that accepts power-in charging, and/or video out, there is a probe on the USB bus while the iwm firmware is loading and the loading fails:

Code:
If the machine is started from power off, with nothing in either usb port it loads iwm and connects to the access point

Code:
But I don't (yet) accept that the problem is my hardware, as other people with other machines are having the same trouble.
T

The place to report such findings are the bug reports and the freebsd-wireless mailing list. Forums here are less frequented by FreeBSD developers, they are on mailing lists and Bugzilla. It's more likely your findings get noticed there than here. If you have to show lengthy standard output in Bugzilla add it / them as attachment.
You must log in or register to reply here.
Share:
Reddit Pinterest Tumblr WhatsApp Email Share Link
Top