How to install tor browser in FreeBSD?

How can I install tor browser in FreeBSD, I already installed tor.
Last edited by a moderator: Jun 14, 2017
D

There are several ways how you can use tor in FreeBSD…
After security/tor installation, add

Code:
to /etc/rc.conf and 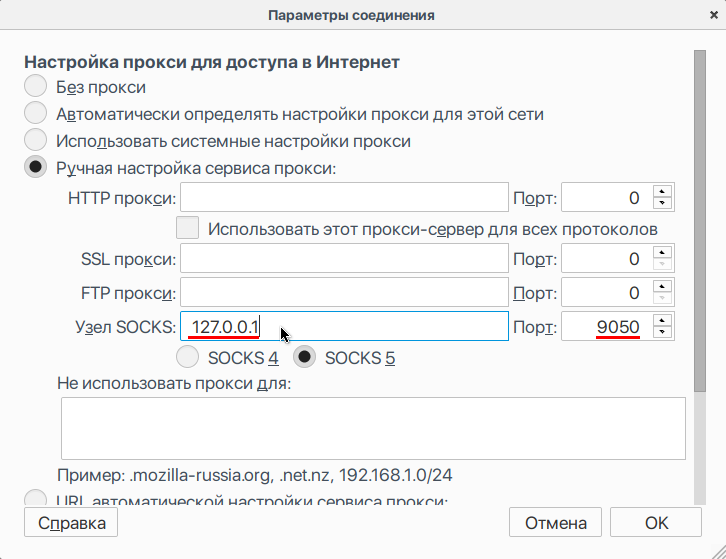 Also make sure to tick an option at the bottom of "connection settings", to send DNS requests through tor when using SOCKS 5

Also you can use tor with every application or browser via net/torsocks.
To make any application work through tor, launch it like this:
% torsocks chrome
or
% torsocks xterm
etc...

There is no need in "tor-browser" that is available on windows,
because in fact "tor-browser" is a www/firefox-esr with another icon and few "addons" pre-installed:

https://en.wikipedia.org/wiki/Tor_(anonymity_network)#Tor_Browser said:
The Tor Browser, previously known as the Tor Browser Bundle (TBB), is the flagship product of the Tor Project. It consists of a modified Mozilla Firefox ESR web browser, the TorButton, TorLauncher, NoScript and HTTPS Everywhere Firefox extensions and the Tor proxy.
Click to expand...

When using Tor, there are several important considerations:
1. DNS Leaks: If you use a browser add-on like FoxyProxy or such, the DNS lookups can continue to be made using host's /etc/resolv.conf rather than the Tor network DNS services.
2. As far as I recall, TorBrowser is an integrated package of mozilla browser + www/polipo, where an un-bundled polipo was found to leak certain information (don't recall details).
3. Read about online privacy vs. anonymity (which is a lot more difficult to correctly implement).
4. Seriously consider www/privoxy as a front-end to security/tor and security/obfsclient to obfuscate Tor traffic against DPI (Deep Packet Inspection).

The torproject website is an excellent source of information on all these issues.
D 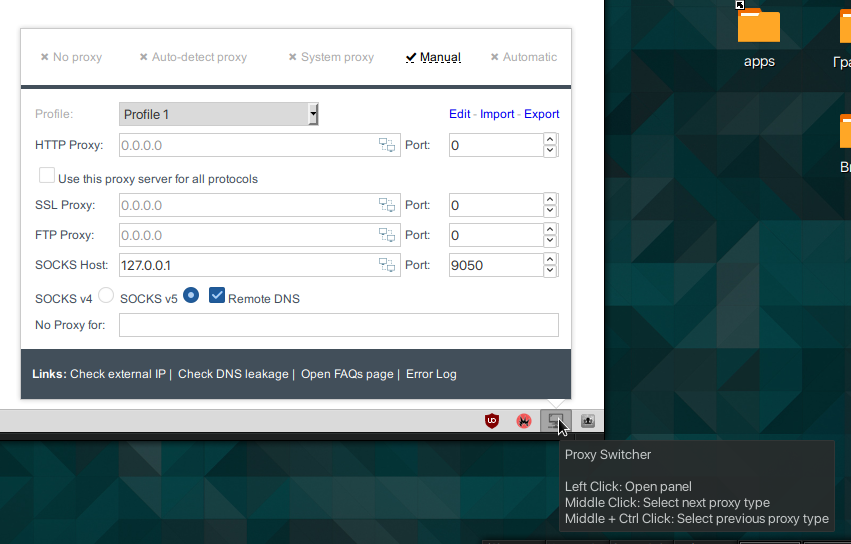 Beeblebrox said:
As far as I recall, TorBrowser is an integrated package of mozilla browser + www/polipo,
Click to expand...

Yes, that looks correct. It's just a convenient package that bundles Firefox, polipo and tor in a single package. On FreeBSD you just install and configure all three separately to get the same result.

Yeah, even for 'advanced' users it's tricky. But you could always "borrow" a prefs.js from an existing TorBrowser installation.
D

To fully cover the topic, here is a little "how to", for those who want to use www/polipo, a caching web proxy, with www/tor.

5. Now you are able to use tor with polipo, just change your firefox proxy settings 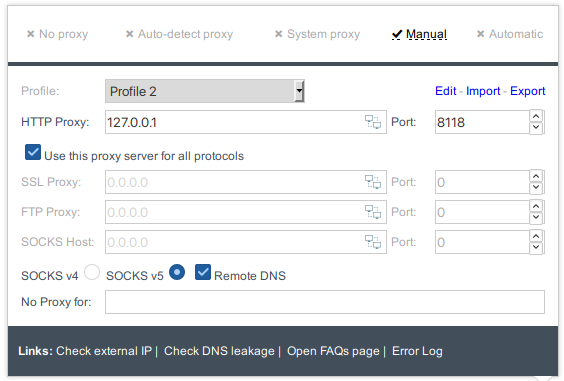 drhowarddrfine said:
I always think about why people would use Tor,
Click to expand...

I like it for when I need to check something on Facebook. I'm too embarrassed to go there otherwise.

the type of people known to use Tor,
Click to expand...

I'm not sure where one would get that information, nor if it's even possible. Do you know? One could, of course, imagine.
D

OJ From what I hear and read, there are a lot of bad and strange people who use Tor for bad and strange things. I've never bothered to look but who writes and controls the Tor software and the servers it goes through? No need to answer but it's like saying you are sending all your financial records via servers in North Korea. I'm not one who would feel comfortable with that.

There are perfectly valid reasons to use Tor, not everything Tor is related to doing something "illegal" or nefarious. This is not a discussion about whether or not it can be used to hide illegal actions, this is a thread about setting up Tor. Lets keep it that way.

Beeblebrox said:
2. As far as I recall, TorBrowser is an integrated package of mozilla browser + www/polipo, where an un-bundled polipo was found to leak certain information (don't recall details).
Click to expand...

polipo isn't bundled. Maybe extract Tor Browser for Linux then replace binary components (tor, pluggable transports, patched firefox-esr) with native ones. However, due to lack of sandboxing Linux version running under Linux (not linuxulator) will always be more secure against deanonymizing attacks.

In my opinion if one is going to install Torbrowser in FreeBSD then it should be for research or developmental purposes. If it is for serious security use then it's probably better to use Linux. My personal opsec does not require ultimate security, but I'm time limited and not a professional so just have a separate computer for security use.
OP

Gosh guys,how did this question turn into a debate?

TL;DR Read handbook, figure out your security and anonymity requirement(s) and/or goal(s), read at links on Tor.

There's also a need to check for things like DNS leaks and using a VPN is recommended.
https://www.dnsleaktest.com/

If it's just experimental, or for some modicum of privacy in the modern age, as most use it for, you probably don't need all the bells and whistles.

Code:
using bHyve bhyve(8)(), or Virtualbox (emulators/virtualbox-ose. I'd recommend an encrypted disk zfs(8)() and geli(8)(). If possible, configure/install with hardened options (ram/swap encryption, disk encryption). Use pf, ipfw, or whatever you're most comfortable with, then just run Tails (linux-OS in a virtual machine).

Maybe best to start with this on OpenBSD, NetBSD, or Mir (which I have virtually know knowledge of).... or even pFsense. Don't use root, etc. etc.
I can't give you specific advise because I don't know your intended designs/requirements, nor am I an expert Tor. Tor guides will generally steer you in a safe direction.... with the exception of Microsoft (and possibly Apple's) keylogging and constant data flow, the most minimal system you can have, hardened, and trusted would provide the best security, along with virtual networking devices, etc. etc. The handbook and man pages are a man's best friend Jails are also another option.

I'd read all of the Security section of the handbook (Chapter 13) (probably a must), 14: Jails, 15: Mandatory Access Control, 29: Firewalls, and 30: Advanced Networking

We can probably help with specefics but it all depends on how much tin foil you need to wear/what you are doing etc.
Breeze through the synopses of the Handbook, figure out a desired setup, and then perhaps we can give better advice.

For ultimate tinfoil hat, hardened NetBSD (I'm not sure about OpenBSD and Xen, but if there's a Xen kernel, maybe OpenBSD)... FreeBSD+Jailed vbox/bhyve+tails+a dns caching server or two, and ZFS and/or NetBSD's upgraded UFS, virtual hosts/networking, VPN (or two, or three)... but TBH tails does a decent job, especially with a VPN, of anonymizing traffic (though, as stated before, anonymous traffic != secure! But with a setup like that, you might just get hired at the NSA, assuming they'll give you any kind of clearance after you start your anti-psychotics.

Oh and if you're worried about security, everything should be wired, no wireless devices. Especially unencrypted keyboards and mice... but also wifi and bluetooth, obviously, kind of defeats the purpose of encrypting things when someone can easily access your encryption keys and everything you've ever typed in your system .

Oh! Make sure you're gateway and routers are secure, otherwise, again, what's the point? For that matter, tor has a page for good and bad ISPs.

Do be careful with what you click on and where you browse on Tor. Some hidden services are quite unsavory and I have browsed some but luckily not seen anything so bad that it traumatized me, but it's out there... Pedofiles and the like, who should just be castrated, murder for hire (yup, seen the sights, not sure if they're real, scams, setups, or what, but it's pretty weird to see it), but I think they're a minority of the users. Also tails is very good at paying attention to your nodes, but entry/exit nodes are a whole topic that is well documented on the Tor site itself.

Sorry for long post, haven't been on the forums in forever.

Dr.Topaz said:
Gosh guys,how did this question turn into a debate?
Click to expand...

Because BSD users all have the same necessities, that's why we build our OSes the way we do

A question for someone else to answer... are there concerns with cryptography and export laws with node networks?
B

Very very useful topic and all the stated configs work like magic.
I've learnt a lot from it.
The queer happening is tha i can't access this thread or the f'bsd forum as ff can't find the address. :oops:
B

ILUXA said:
because in fact "tor-browser" is a www/firefox-esr with another icon and few "addons" pre-installed:
Click to expand...

This link is broken. Other info is really great. Thanks.
G

bsdnoob
I do not see any benefit of your postings to this old thread except that you quoted a statement that is not the whole story and as such is misleading.

The Tor-Browser is in fact a highly sophisticated configuration of firefox-esr which you won't get just by installing it and adding some addons. What you will miss is the configuration.
K

Per the tor-project site, there's a lot more to anonymous browsing than simply using the onion-ring router as a proxy.

The tor-project site recommends AGAINST ad hoc use of the router with applications that have not been tested.

What programs can I use with Tor? | Tor Project | Support

Defend yourself against tracking and surveillance. Circumvent censorship. | What programs can I use with Tor?

From the above page,

"There are plenty of other programs you can use with Tor, but we haven't researched the application-level anonymity issues on all of them well enough to be able to recommend a safe configuration. Our wiki has a community-maintained list of instructions for Torifying specific applications. Please add to these lists and help us keep them accurate!

Most people use Tor Browser, which includes everything you need to browse the web safely using Tor. Using Tor with other browsers is [dangerous and not recommended]{https://support.torproject.org/tbb/tbb-9/}"


The tor wiki (https://trac.torproject.org/projects/tor/wiki/doc/TorifyHOWTO) describes issues surrounding the loss of anonymity due to tor-level vs. application-level-protocol leaks.

Generally speaking, using Firefox with a local Tor SOCKS proxy is a really bad idea. Tor Browser has many adjustments to prevent leaking all kinds of data, mostly through Javascript. If you disable Javascript you'd probably be okay but I'd still be cautious.