bhyve How to boot Debian in EFI mode using bhyve...

I hope to make happy someone,explaining how to boot Debian using the EFI bootloader and Bhyve. There is an extra configuration to do,otherwise it will not boot at all. First of all,I'm using vm-bhyve and this conf. file :


Code:
As is,if u try to boot Debian with vm-bhyve,you will see that after having installed Debian,the hard disk will not boot and the problem is caused by a "a bhyve's incomplete UEFI implementation". The solution is here :

The method that he used to boot Debian in EFI mode worked for me. I mean I did this after having installed Debian on a qcow2 image using virt-manager on Linux and then I have converted the qcow2 file to a raw / img file :


Code:
The problem is that,later,for some reason Debian is not able to reach the desktop manager. When the booting process has ended,I see only a black screen with a blinking cursor and nothing happens anymore. I also tried to go in "recovery mode" : this is what happens : 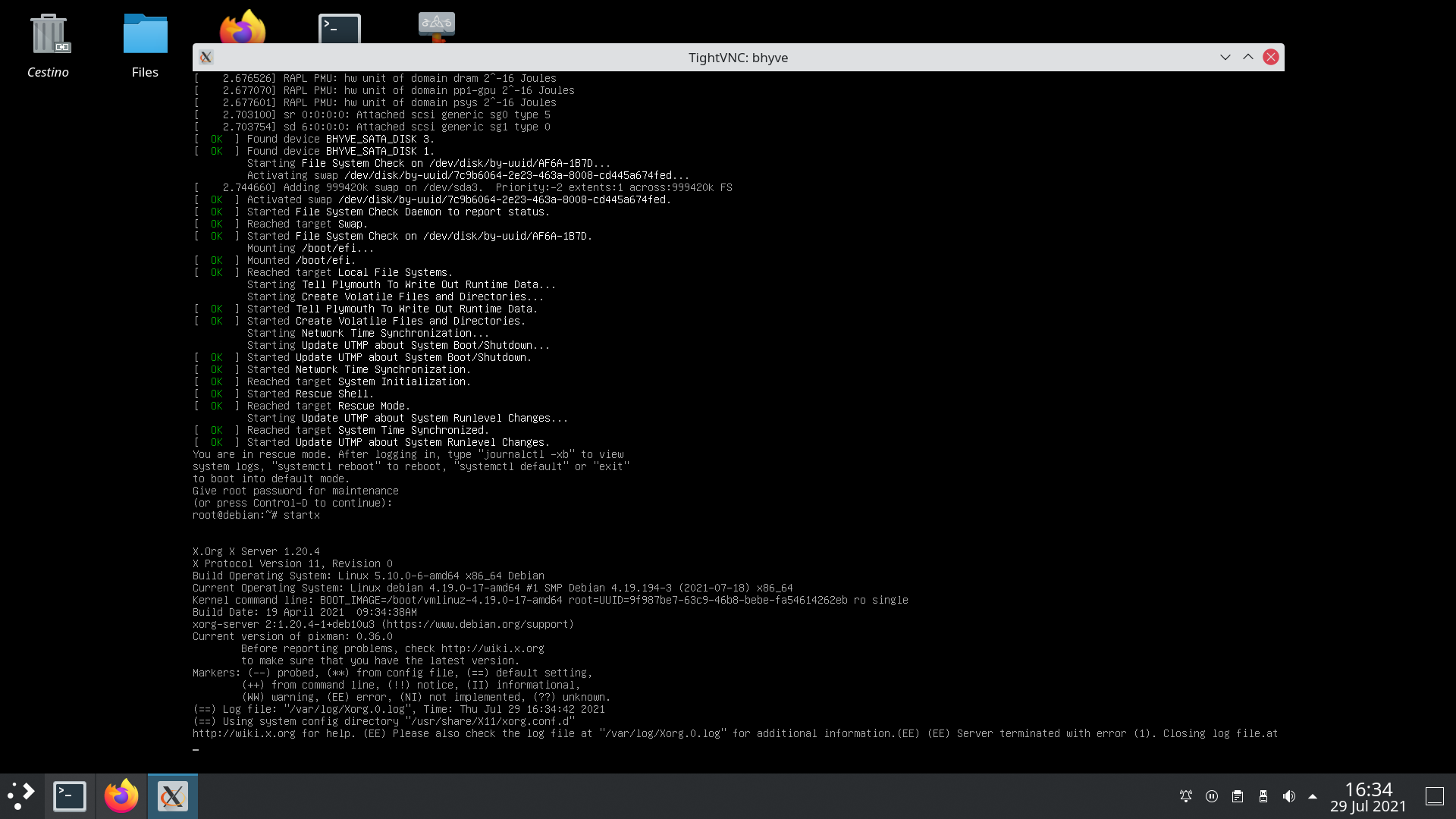 Yes, don't try to run Xorg. Keep it in text mode, or even headless.

Then run a VNC server on the guest and VNC in from the host.

Code:
Use virtio-blk for the disk devices.
OP

do u want to give a look at this video ? 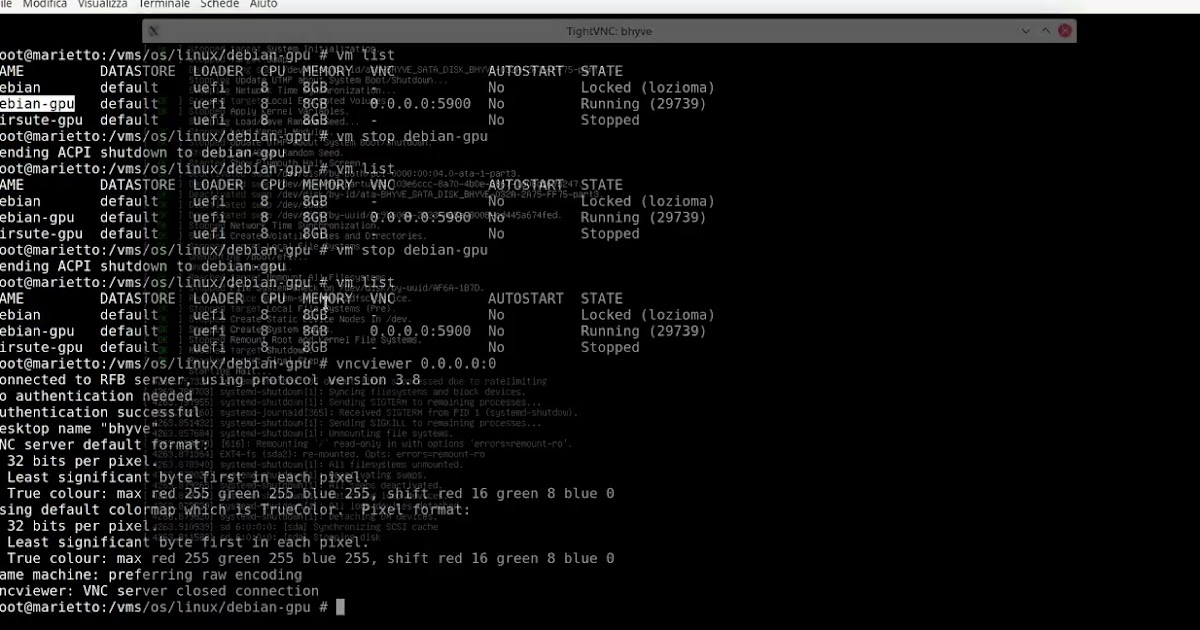 I made some progress. I've configured Debian in a different way and now it is able to reach the login prompt. I have also configured correctly vncserver and it works (at least,internally inside the VM that run on qemu-kvm in Linux),but in FreeBSD the situation is totally different. First of all,I have opened the port 5900 on the admin page of my router. After that,I've checked if the port 5900 is opened on FreeBSD :


So,it seems that on FreeBSD port 5900 is open. Let's see how is the situation in the Debian guest os :

as u can see,there isn't any port 5900,but the tightVNC server is running correctly : 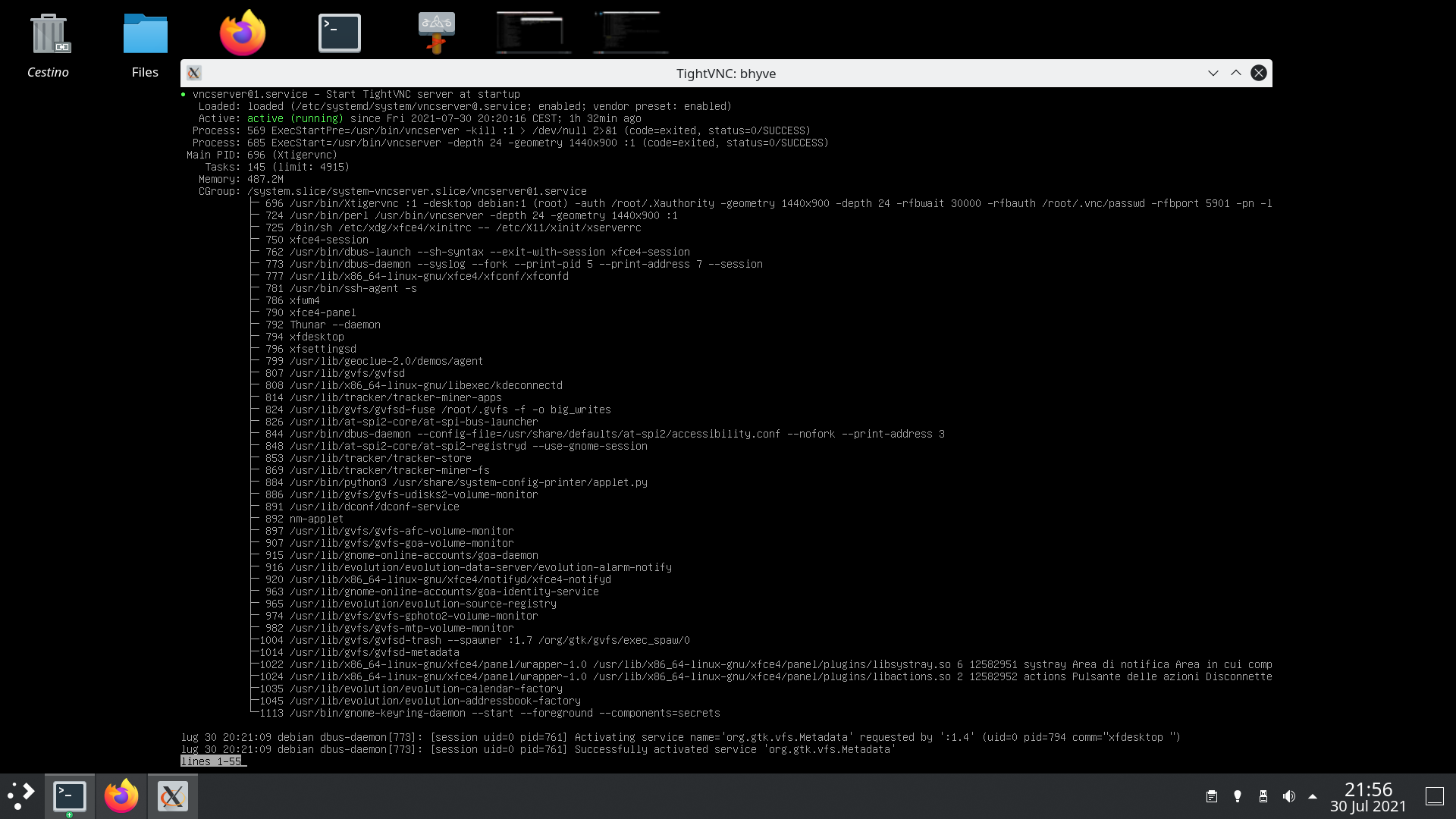 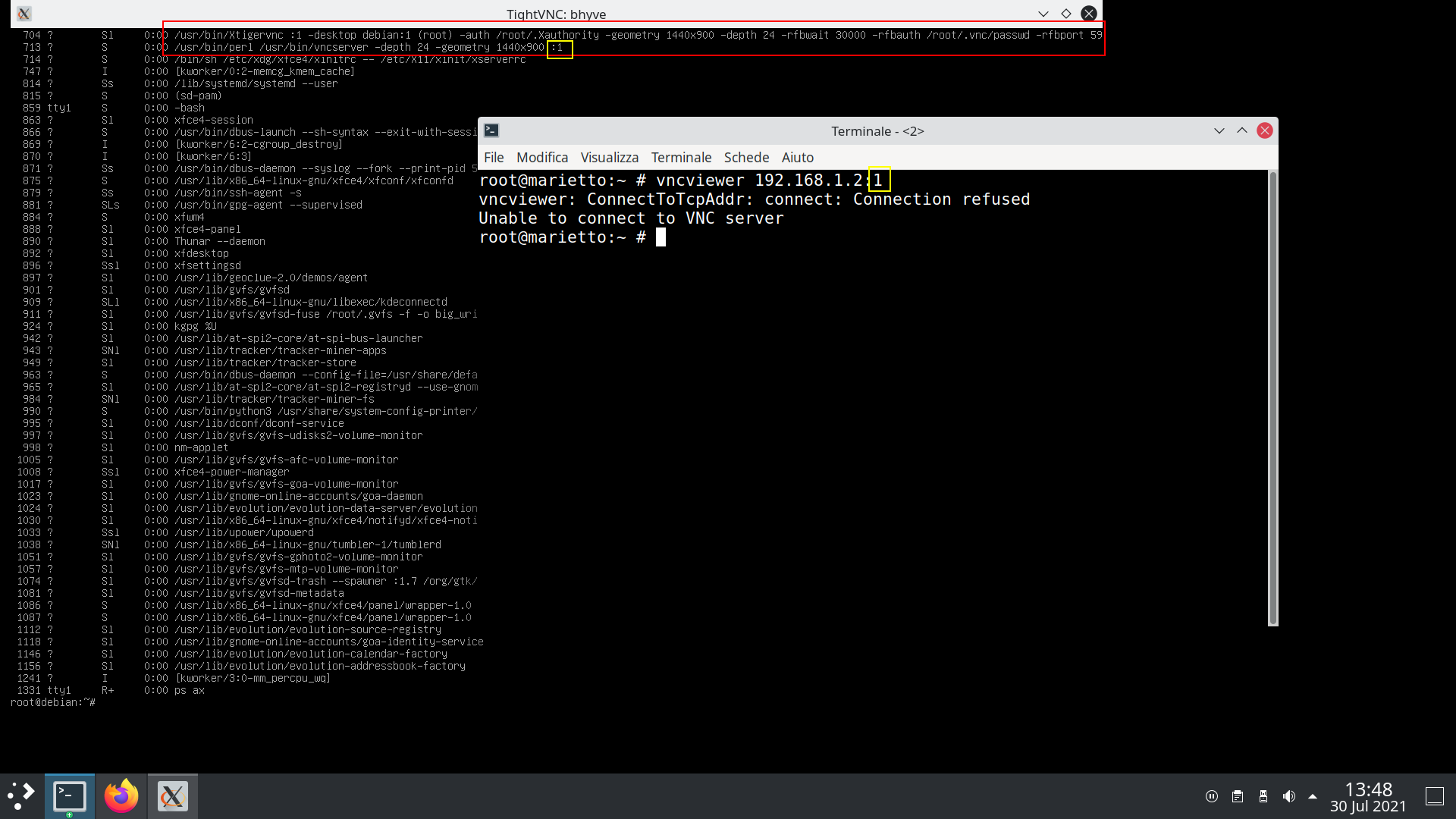 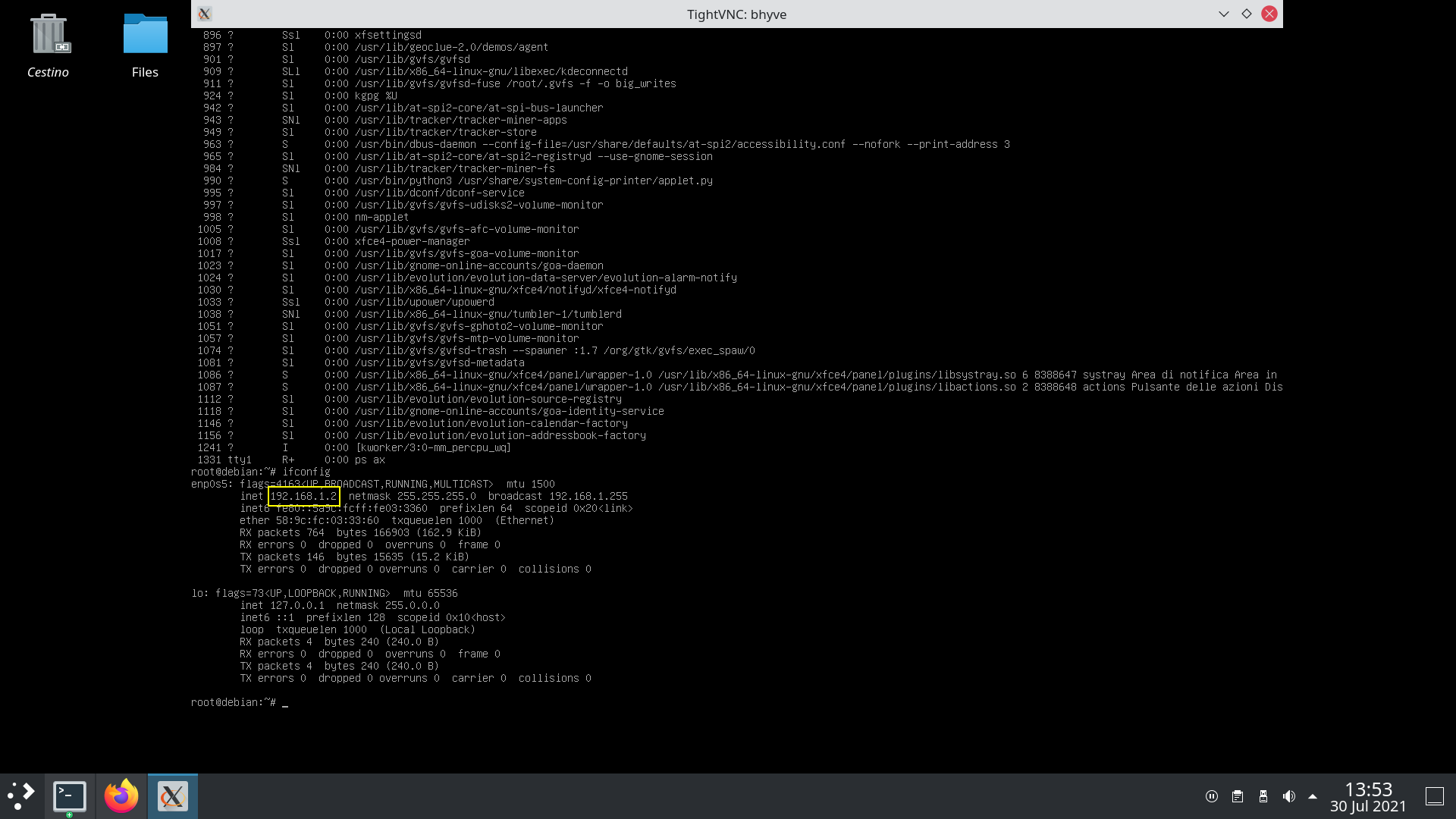 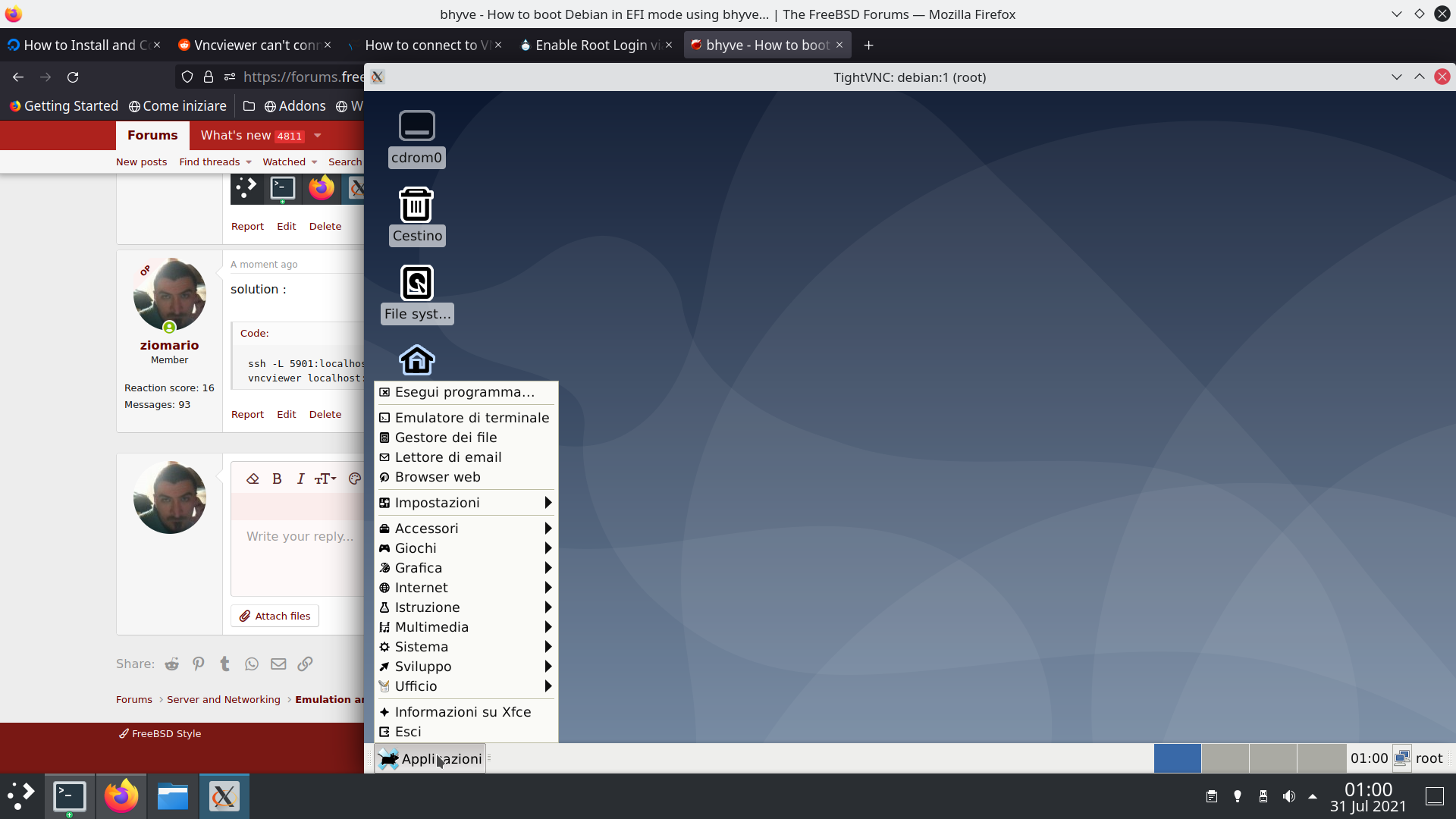 ziomario said:
First of all,I have opened the port 5900 on the admin page of my router.
Click to expand...

Don't open VNC up to the internet. Really, it's not the safest protocol in the world. Tunnel it over an SSH connection if you want to access it remotely.
OP

It seems that to make work the audio inside the debian vm,we should do the following :
(On Debian I'm using kde plasma)
load-module module-native-protocol-tcp auth-ip-acl=127.0.0.1 auth-anonymous=1

ziomario said:
it produces the error : export: Command not found.
Click to expand...