I read about Geli full disc encryption, but did not like that on boot you have to sit at the console to enter the disk password. I'd like to be able to restart my home server from work after a power failure.

- There is an unencrypted FreeBSD (caveat: kernel must match that of the encrypted system, care when upgrading)

- System boots into that unencrypted FreeBSD

- reboot -r is used to boot into that system (man reboot explains that quite well)
Click to expand...

I wondered why I hadn't found more postings with the reboot -r pattern.

Anyway, I liked the idea, especially as the unencrypted first system is fully working and can send me an email that it needs attention and needs me to ssh in and enter the Geli password for the second system.
Of course, on booting the machine might be already sitting in burglar's home. But I could have a webcam pointing to the machine ..
Or burglar could have manipulated sshd of the first system to log my password. But, he could also manipulate the keyboard, or the keyboard driver of the boot loader, so entering the password directly in the computer does not help.

So I wanted to try this out, set up a Virtualbox and ran the FreeBSD installer.

Actually, the idea was rather easy to set up.

From the installer UI partitioned the disk, no mount point for the Geli partitions. 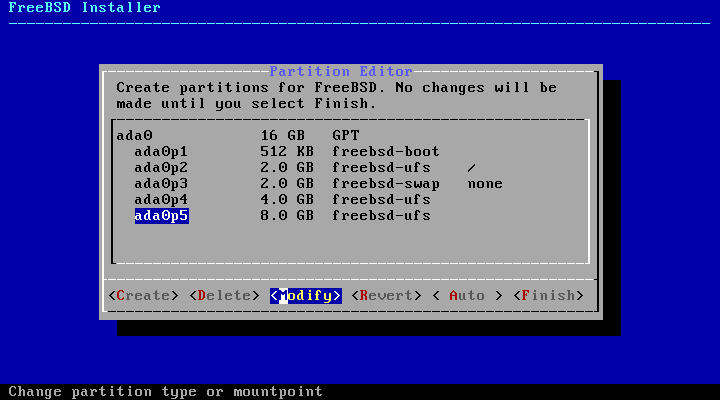 
Code:
It actually booted into ada0p4.eli but complained about /dev

So I rebooted, mounted and mkdir'ed /dev and /proc
Also renamed the second machine to geli in its rc.conf

Next time it worked!!

geliboot still prompted for the password, and would not continue booting until I entered it. I guess I should have left the -b option.

So I removed geli from loader.conf, no more password prompt, but have to do things by hand:

I reinstalled my home server (NUC7CJYH2 Celeron J4005, 8G ram) as I had tested above in VirtualBox.
I did some performance benchmarks before and after with the DaCapo benchmark suite.

I was quite surprised that after the conversion to Geli encryption my benchmarks actually ran a little bit faster, only Lucene search (which is disk intensive) a bit slower.