Trihexagonal said:
These are the Doctors recommendations:

1. I'll provide you with a copy of 7 wallpapers to use during the course of treatment.
2. Make a detail account of your feelings during this period and post them in your yea free BeaSD thread on a daily basis.
3. Starting tomorrow, Sunday 3-14-21, you are to use one weekly for 7 consecutive days and change on Sundays only. The machine should be kept powered on at all times.
4. You should configure your desktop like I do, hide the taskbar, and make it look as much like mine as possible all during this period to conceal KDE from view.
5. By the time you reach wallpaper #4 you are now ready to switch to x11-wm/fluxbox and should do so.
6. Continue with rotation of desktop bg for 7 weeks until you have made one complete cycle.
Click to expand... 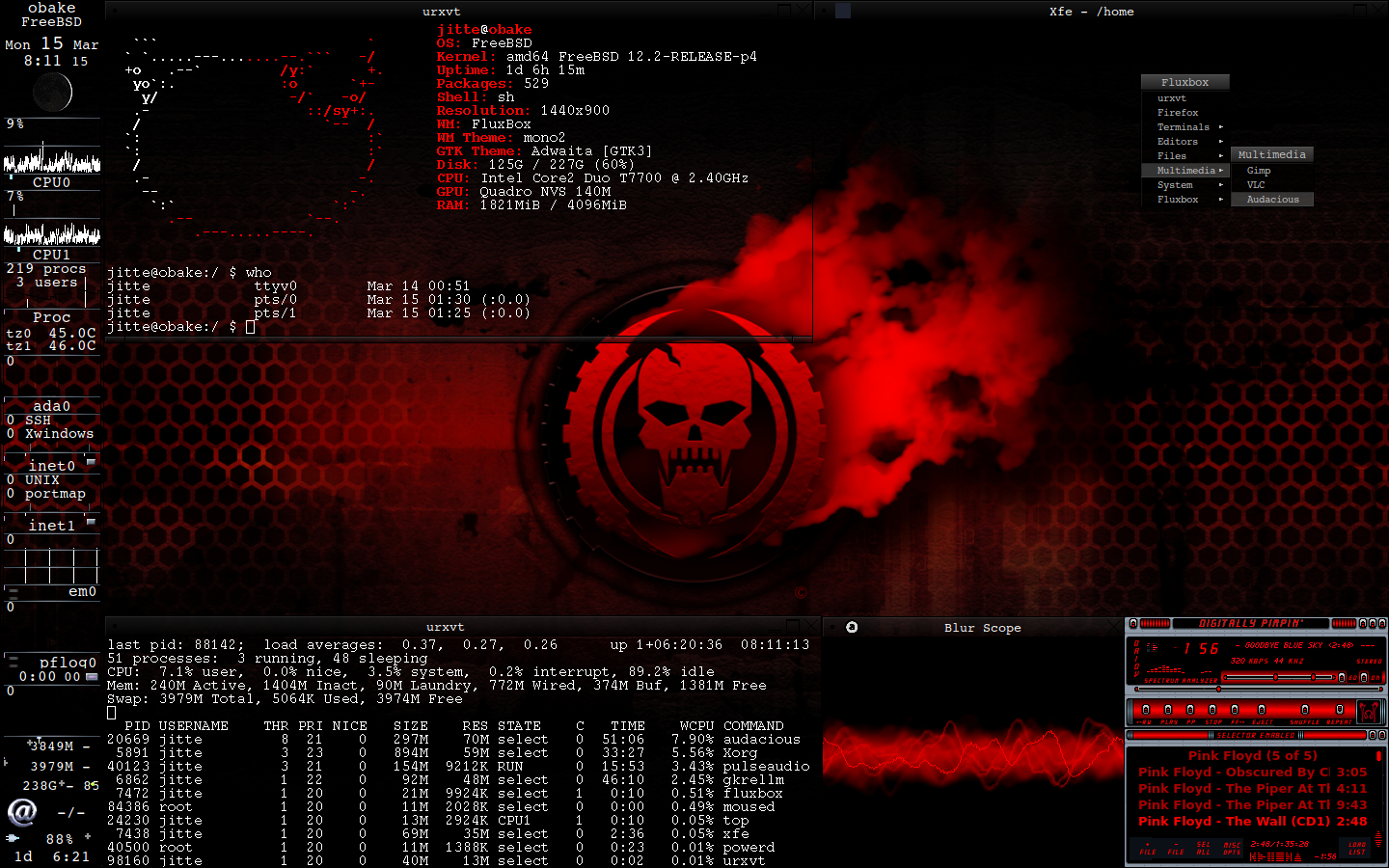 The recently updated T61 I prefer to use most showing a skin from the xmms-skins-huge-src-1.0.0.tar.gz distfile I saved before it was removed from ports used in the Winamp mode of multimedia/audacious.

This is what over time I've found to be the best configuration to suit my style of work, expectations from a FreeBSD general use desktop and how they all look. Although I am well aware not everyone shares that opinion. All the programs seen running stay open once startx is invoked till shutdown.

Besides the programs shown running I can manipulate images, rip and burn CD and DVD, surf the web, shop ebay, use web-based email, edit and transfer files, watch or download videos, scan my LAN with security/nmap, monitor the status of my machines, etc.

If that's not typical general desktop use for other people that's why we're here. But it makes a moot point of the whole... Well, you know... 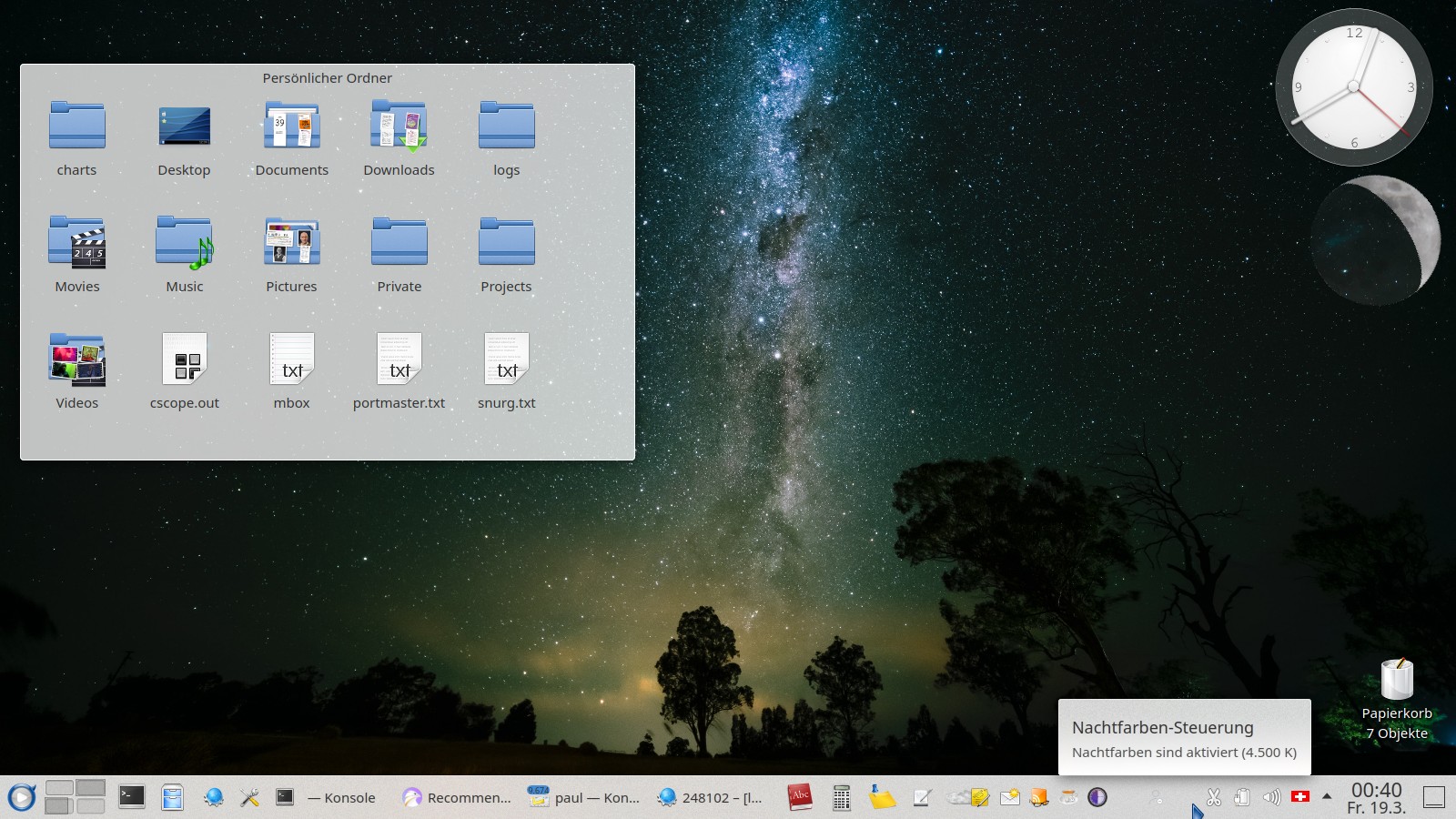 See my previous post for system info. The so-called control panel @bottom is hidden by default because I like it that way, and is visible in the screenshot because the mouse was over it when I took the screenshot. ISN'T THAT A NICE MILKYWAY, DUDE?! 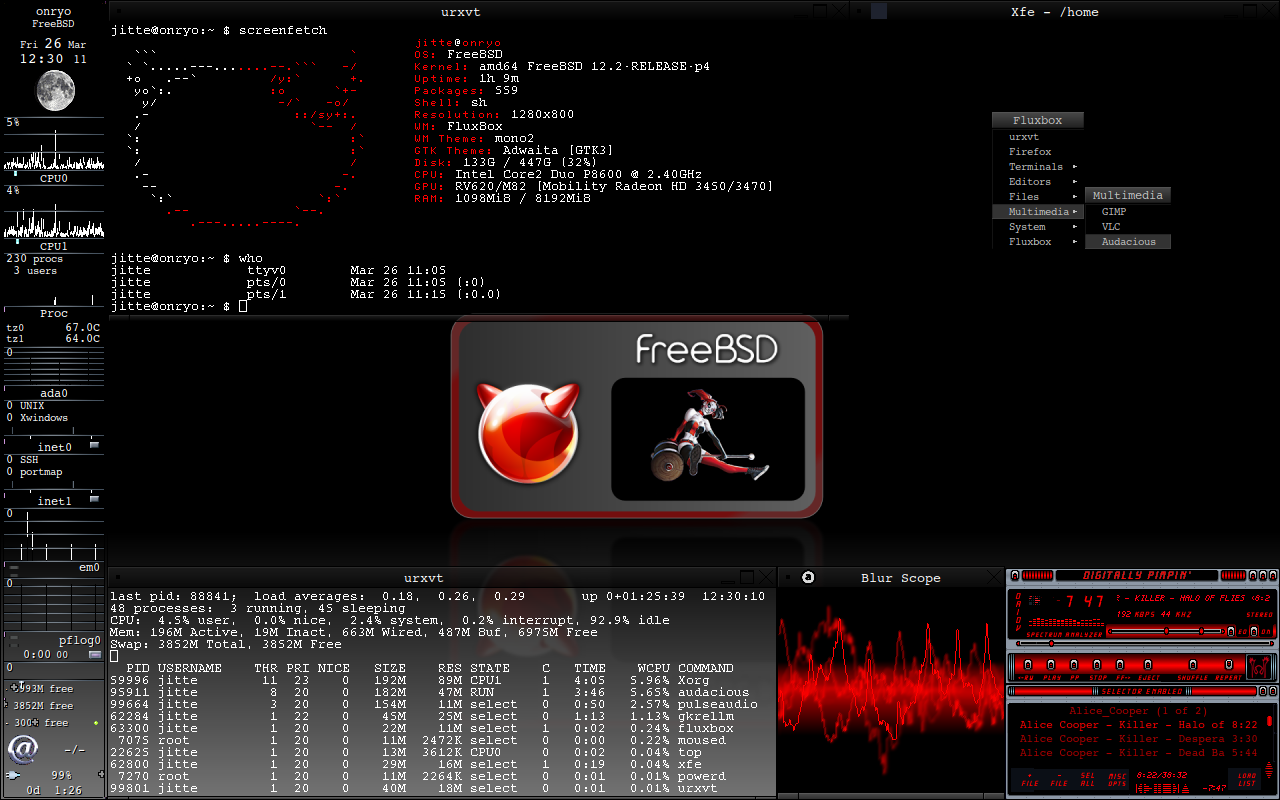 Harley wants to try out for FreeBSD Mascot. 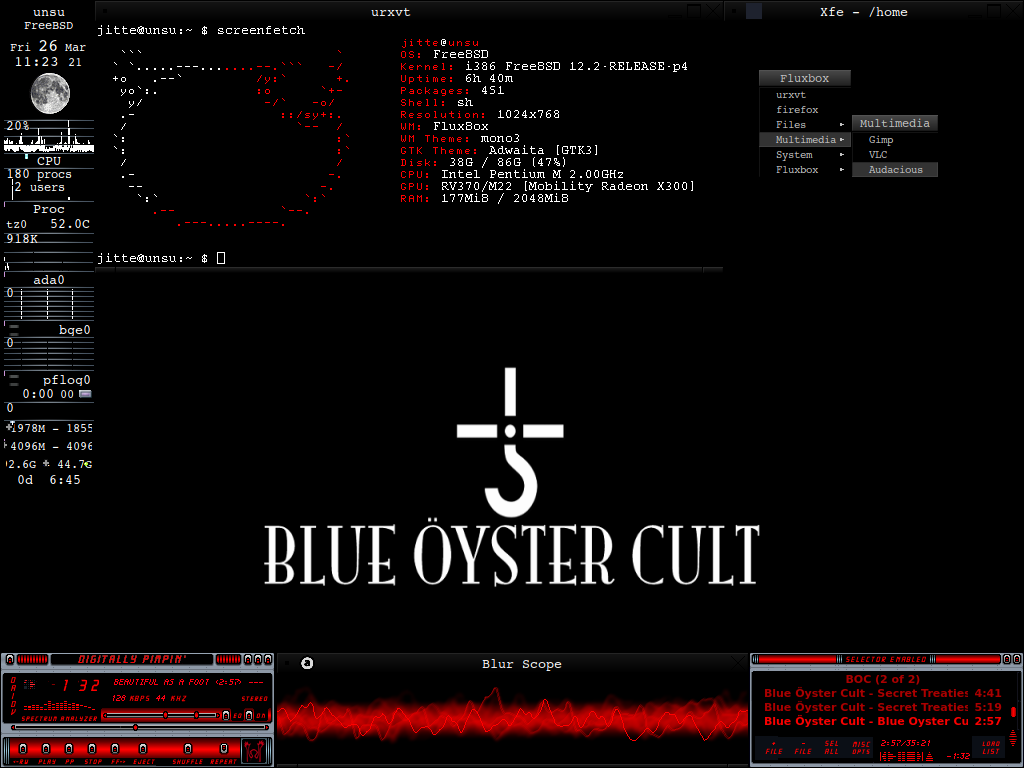 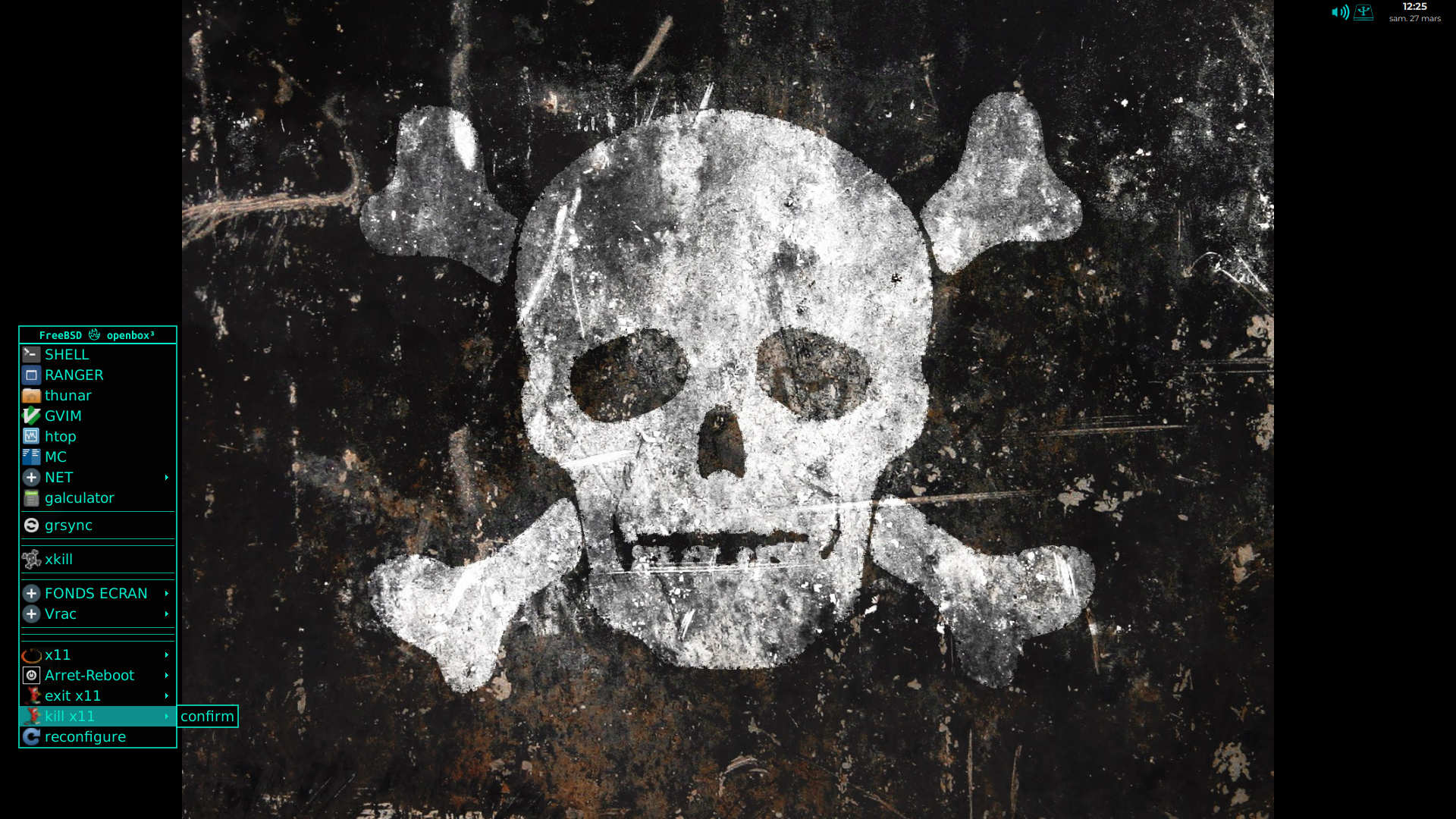 Maybe not as good as red, but you're on the right track. 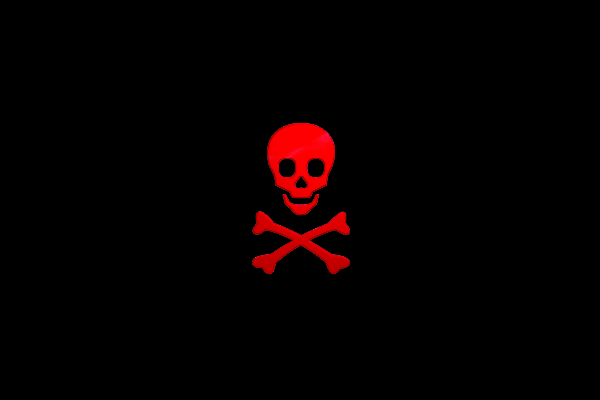 Yes, red and black is beautiful 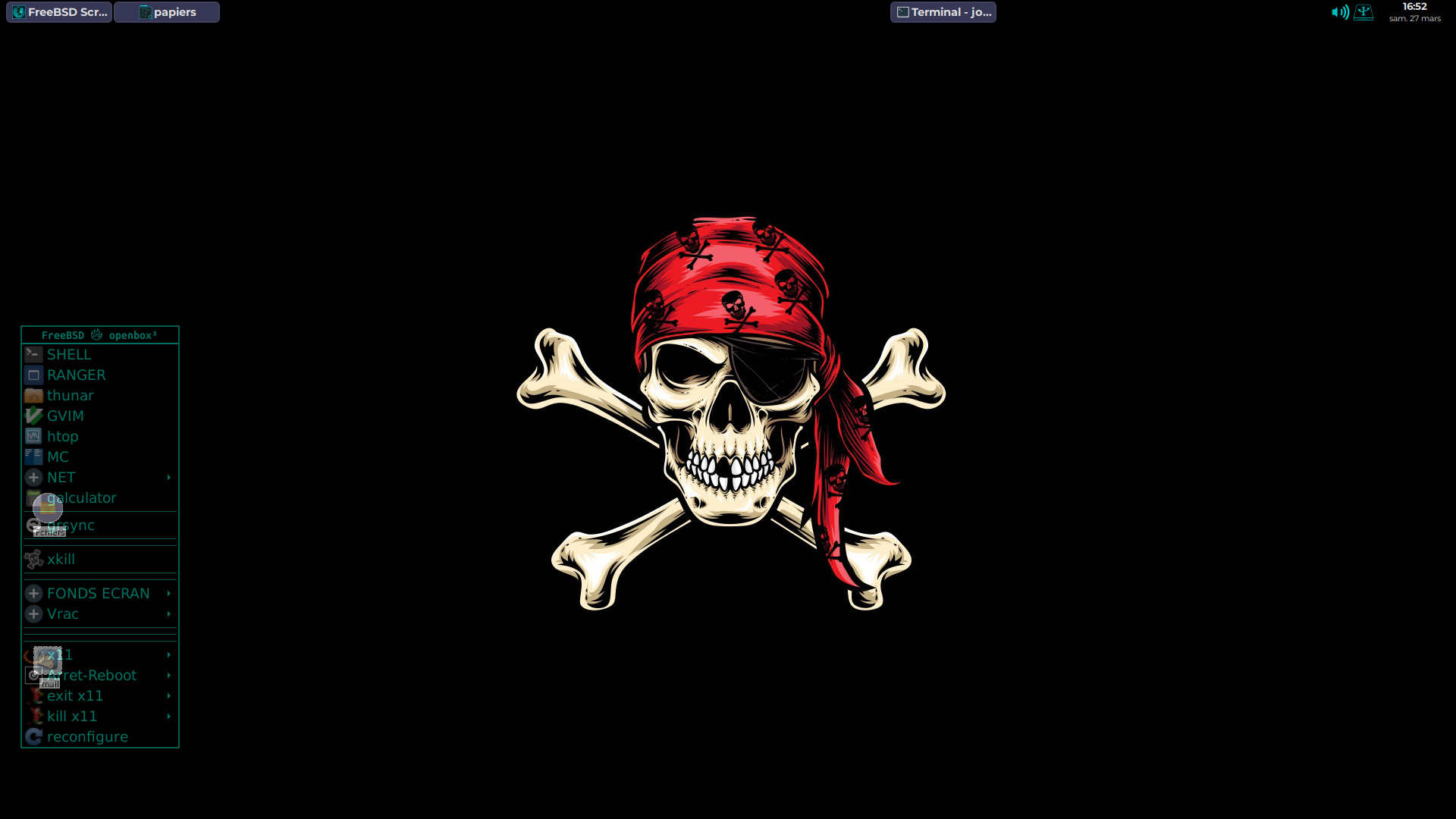 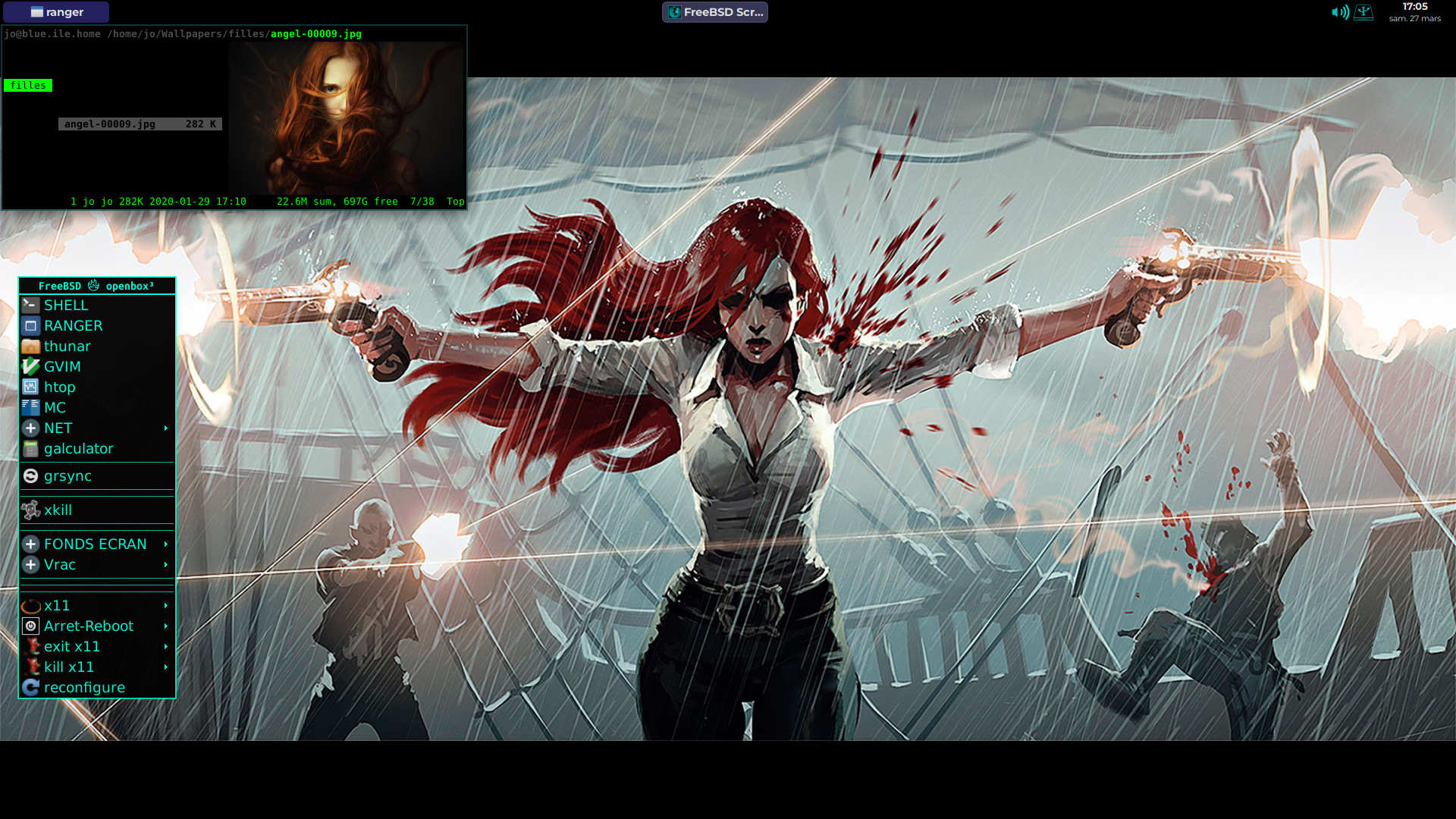 Pretty basic Xfce setup. I recently switched from Linux, and I have been very surprised at how simple and solid everything has been. Very impressed so far. 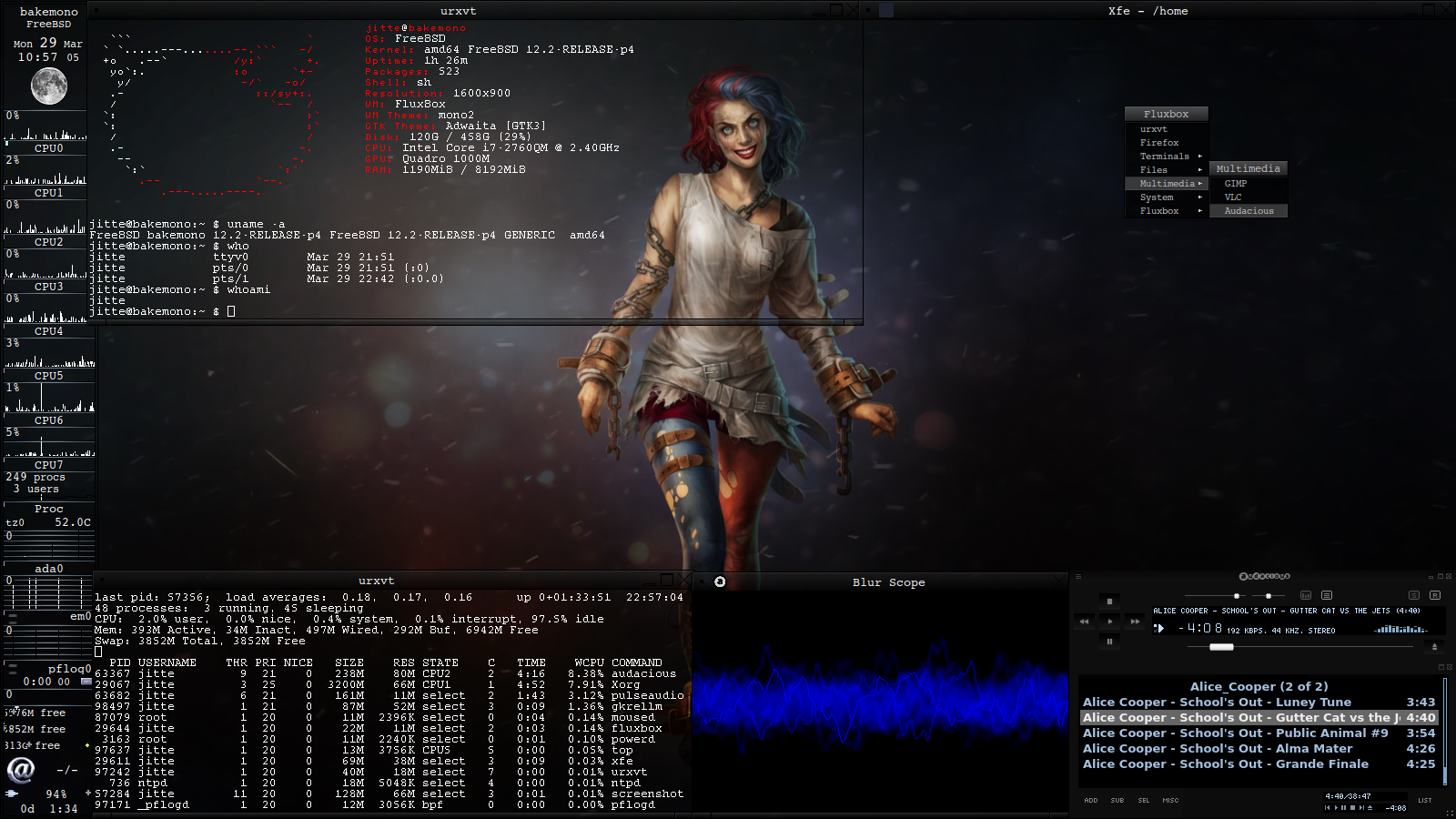 Same here. No, it's not boring. It's fantastic. High five! 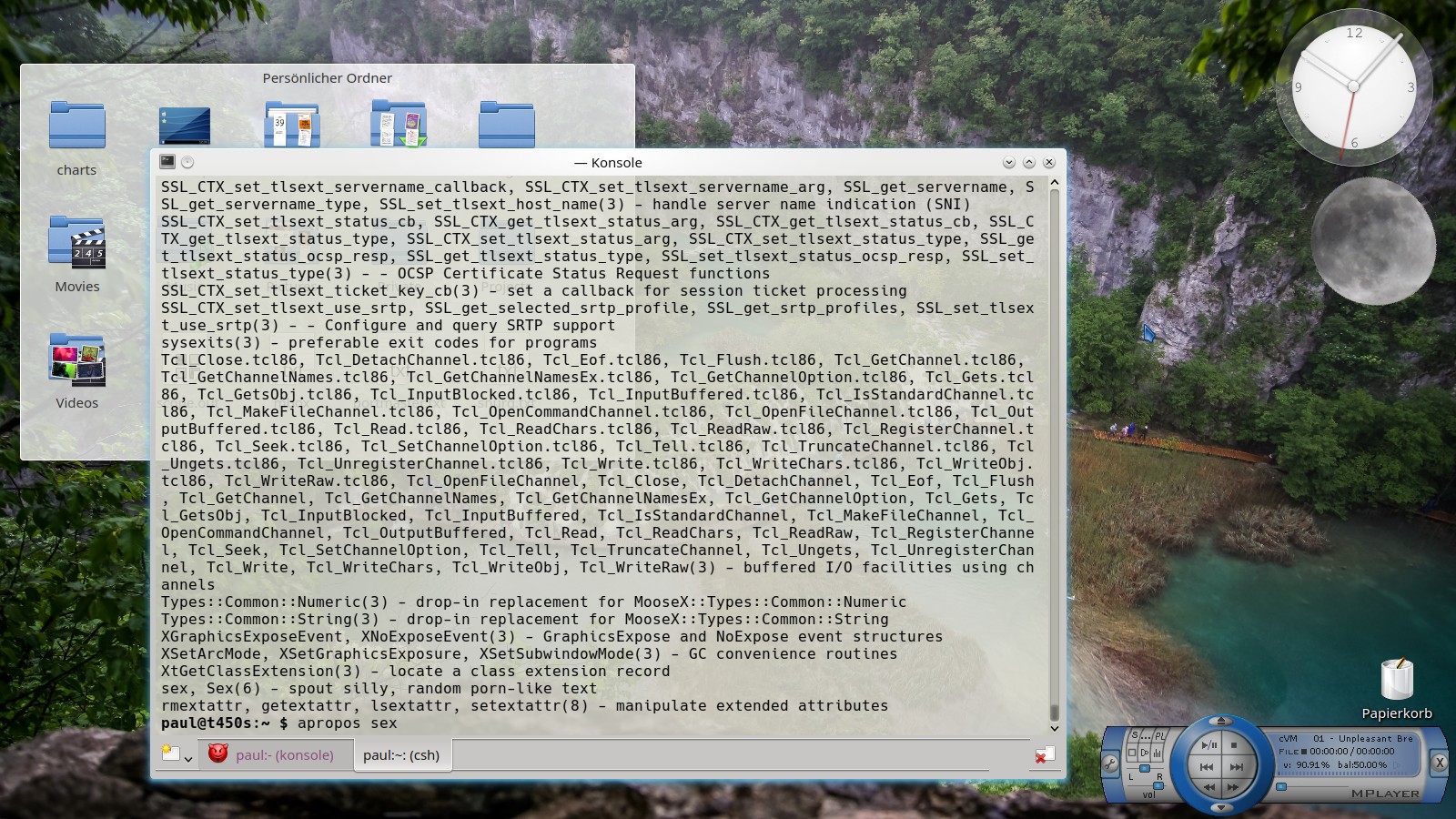 My Thinkpad T400 in its farewell appearance: 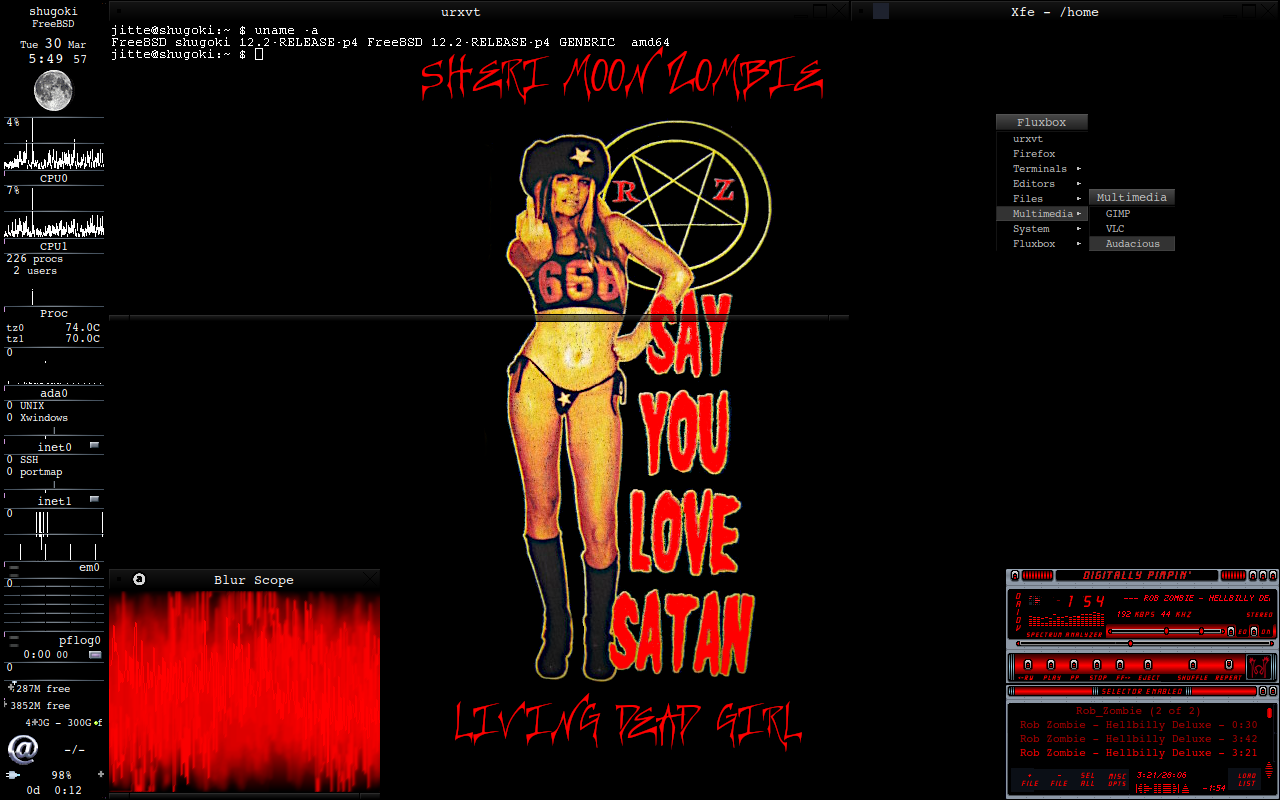 I only have one friend but he is the best friend I could possibly have. I consider him my equal in every way but we have different skillsets.

His does not include using a computer, but he has the intelligence to handle a usr account on his own. So I'm giving him this one. I will Admin it and teach him how to get from the login terminal to the desktop and to do things once you get there.

His wife is legally blind and she does Facebook. This has 1280x800 resolution and will probably be easiest for her to see. It won't look like this when I set it up for the first time, but it's mine right now.

I do not agree to this approach. Give him/her the full root power & get a bloody nose her/himself. S/he can ask here for support, or phone you in case of emergency etc.pp.

Mjölnir said:
I do not agree to this approach.
Click to expand...

Your concerns have been taken under advisement, and discarded. I know him best.

He is apprehensive about using computers, bank accounts, credit cards, etc. He has had some experience using Windows but knows very little about computers. He once said he would break every computer he could get his hands on if he had the chance.

I texted him a screenshot of machinename obake, shown above with red skull bg, told him I have 9 and been speaking casually to him about it. When he helped me get my truck fixed when the tailpipe came loose on a gravel road I thanked him for doing something not prominent in my skillset. He answered I could do things he couldn't, like run a Computer.

That was what I had been waiting for. I asked him what if I gave him one of mine? He said he would Treasure It. So I'm not going to give him some old i386 and want him to become comfortable using it. That way he won't become frustrated and can help his wife learn to run it, who is the most important person in his life.

The fact she has poor eyesight made the T400 the most viable alternative:


Mjölnir said:
Give him/her the full root power & get a bloody nose her/himself. S/he can ask here for support, or phone you in case of emergency etc.pp.
Click to expand...

He might well become frustrated and put his fist through the screen.

When people have problems they can't take care of he is who they call. They are scared to death of him and he takes me along to scare them by standing there quietly. You don't give him a bloody nose. He would knock you out with a punch to the solar plexus.

(It's a good life and pays well. I hope that's not taken into consideration during discussion of my appointment in volunteering for the Position of FreeBSD Psycho Psychologist. Or would that be a bad thing? I can never tell.)

I've only asked one question here, early on, because I couldn't figure something out in the whole time I've been a member here. He values his Pride and would not post here for help even through he will be using the computer from my jitte usr account. With a change to machinename and a less complex password that will be the easiest way to get him one up and running like it should with minimal work on my part.

He will only have usr privileges so the amount of damage he can do will be limited. He has much to learn at my pace and not ready for the ordeal of installing ports or pkg. Right now, unless they deleted their own photos or texts that's the worst he can do. Reboot and the machine should start back up where it left off. He if needs help he knows he can call me and things will be cool. 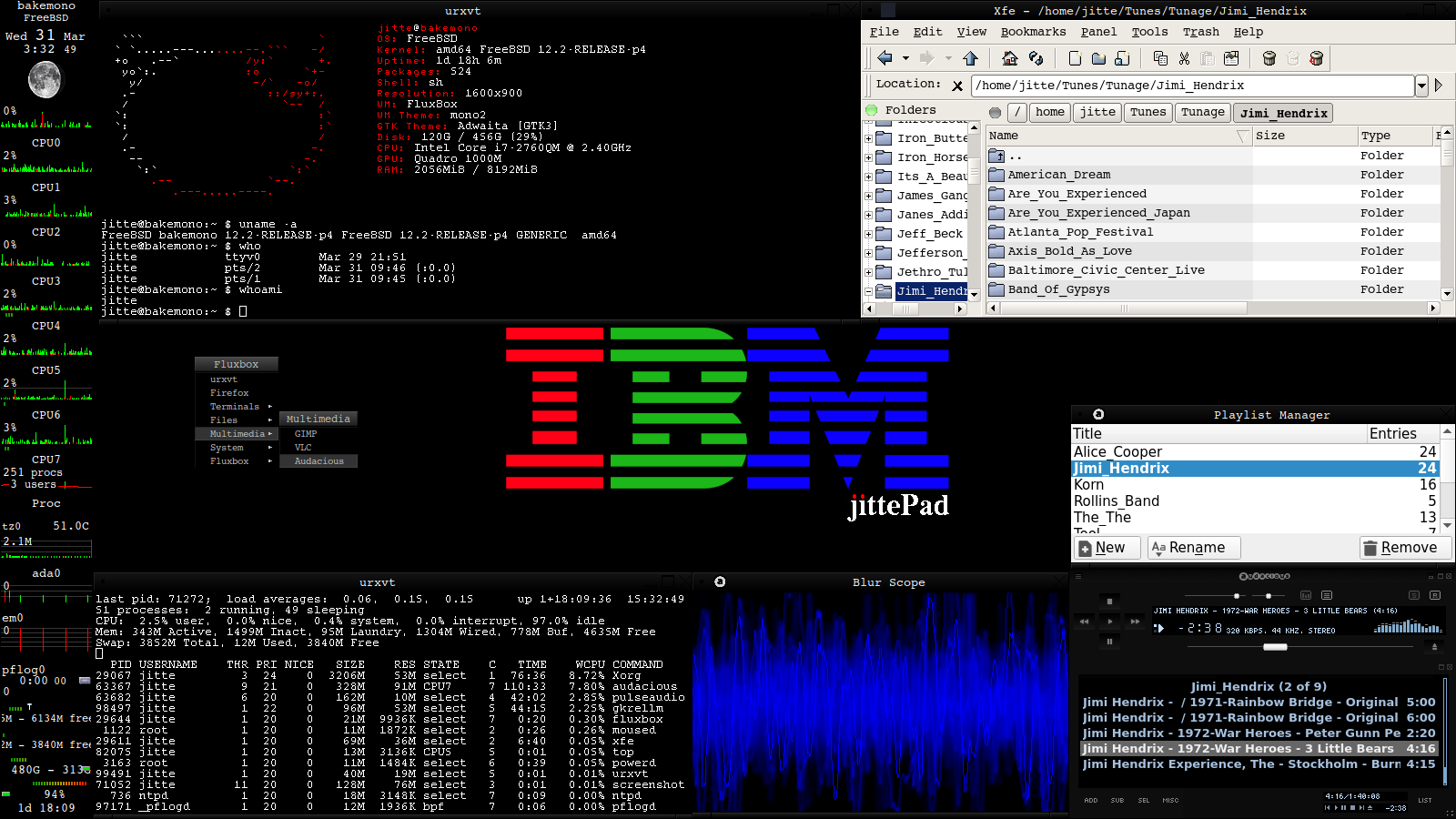 Get us back on track with the IBM jittePad W520. 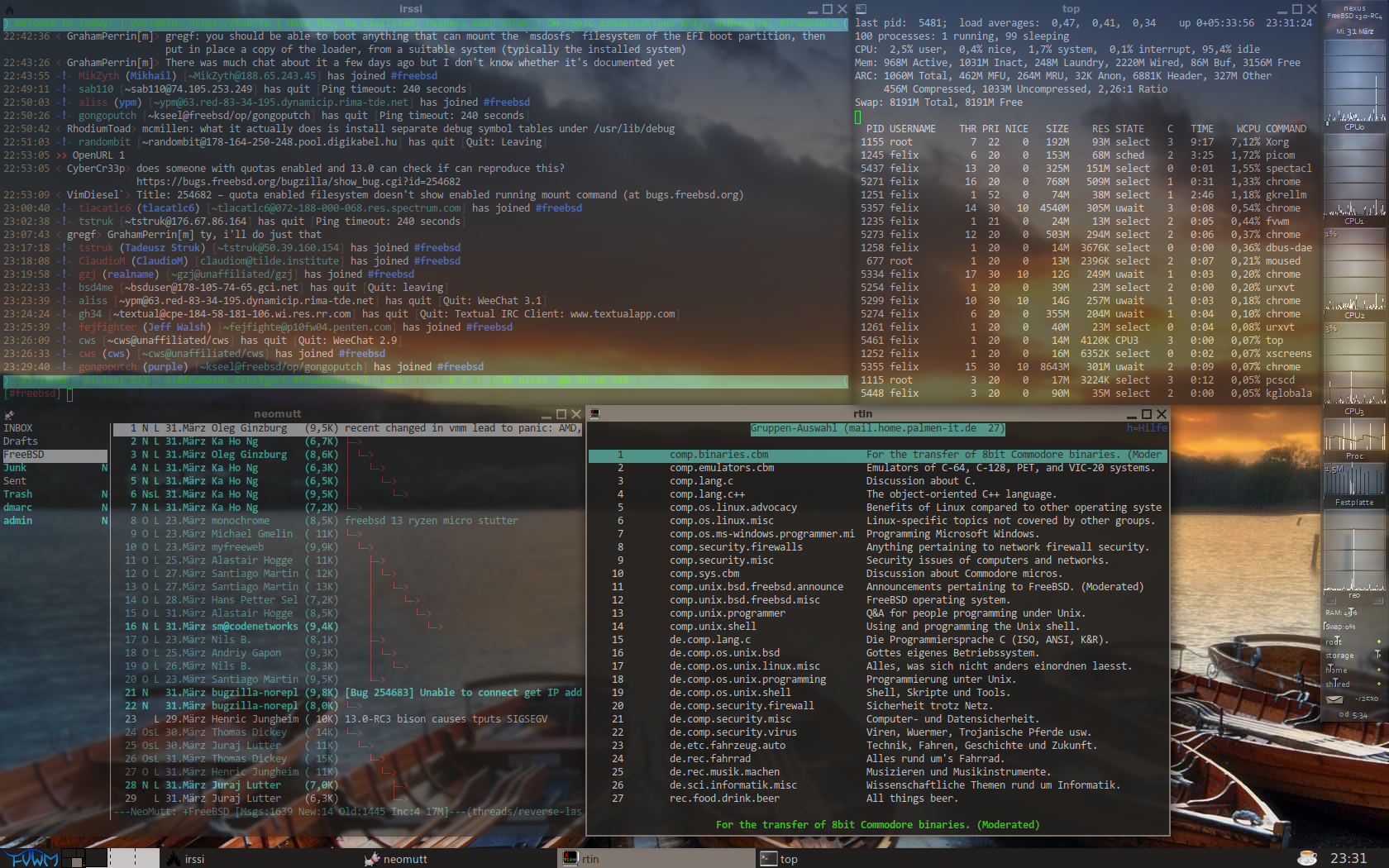 Getting back to the one true use of X11 – X terminal emulators. Behold my "communication center" 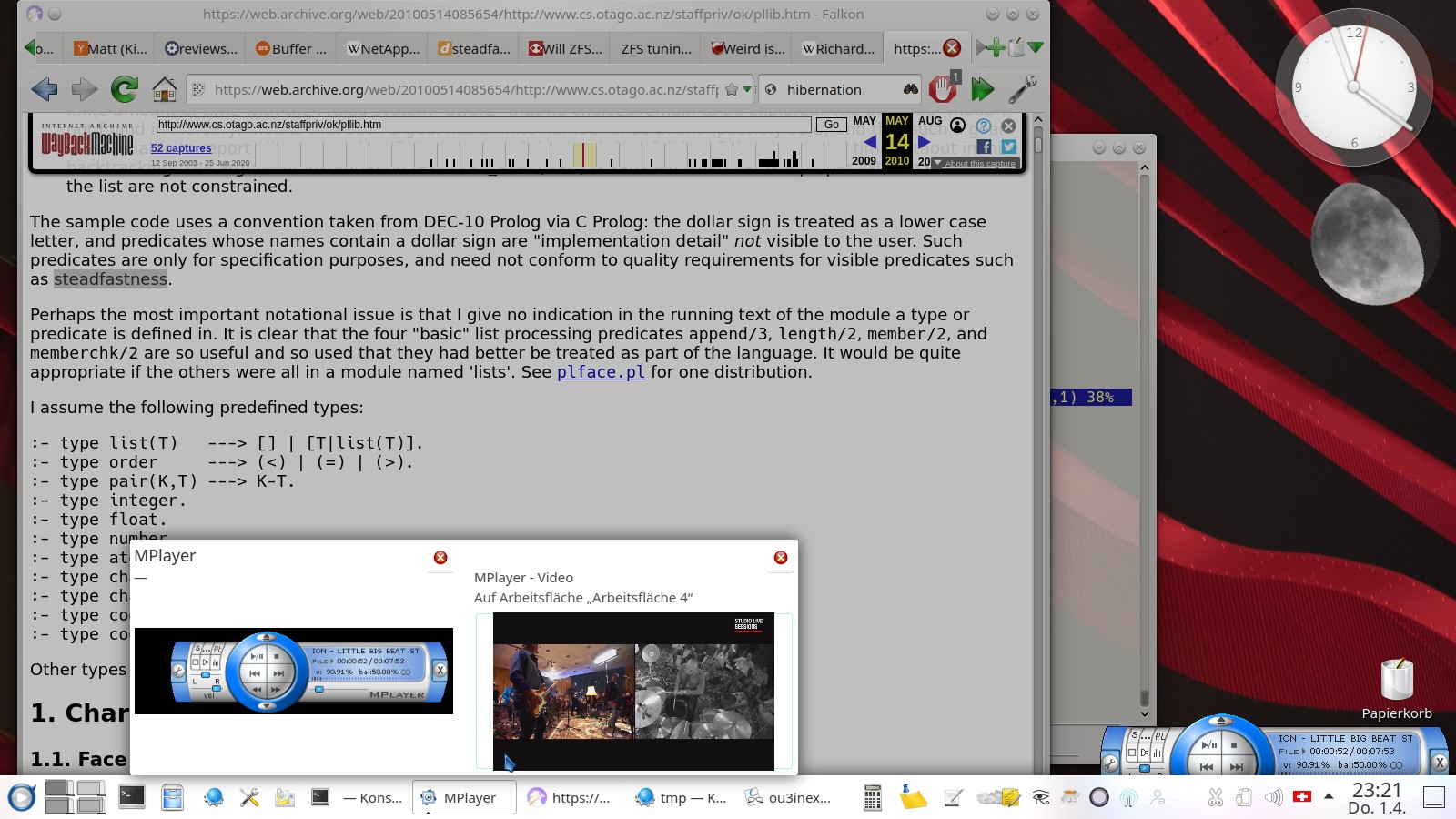 Have to refresh & update my Prolog skills... 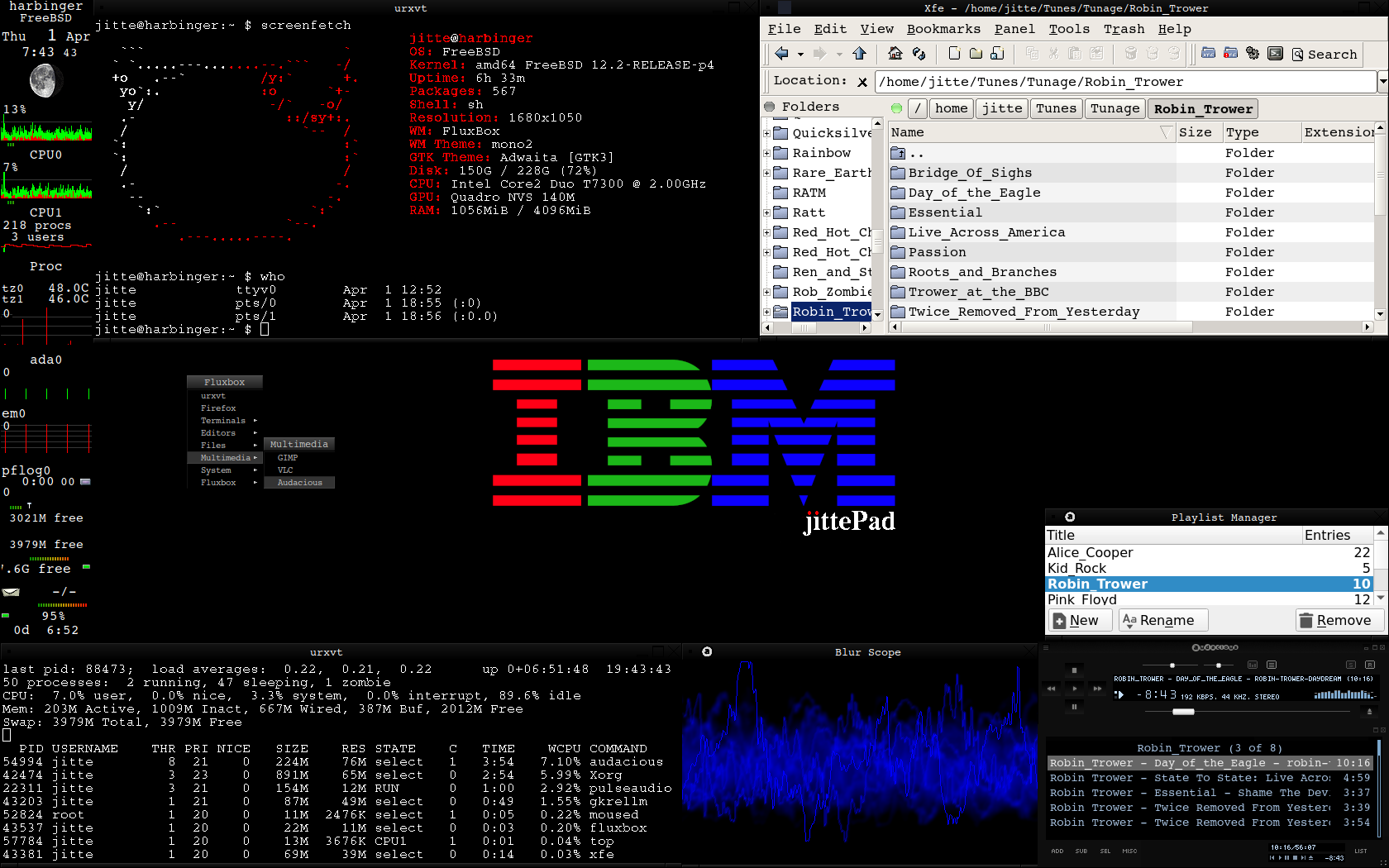 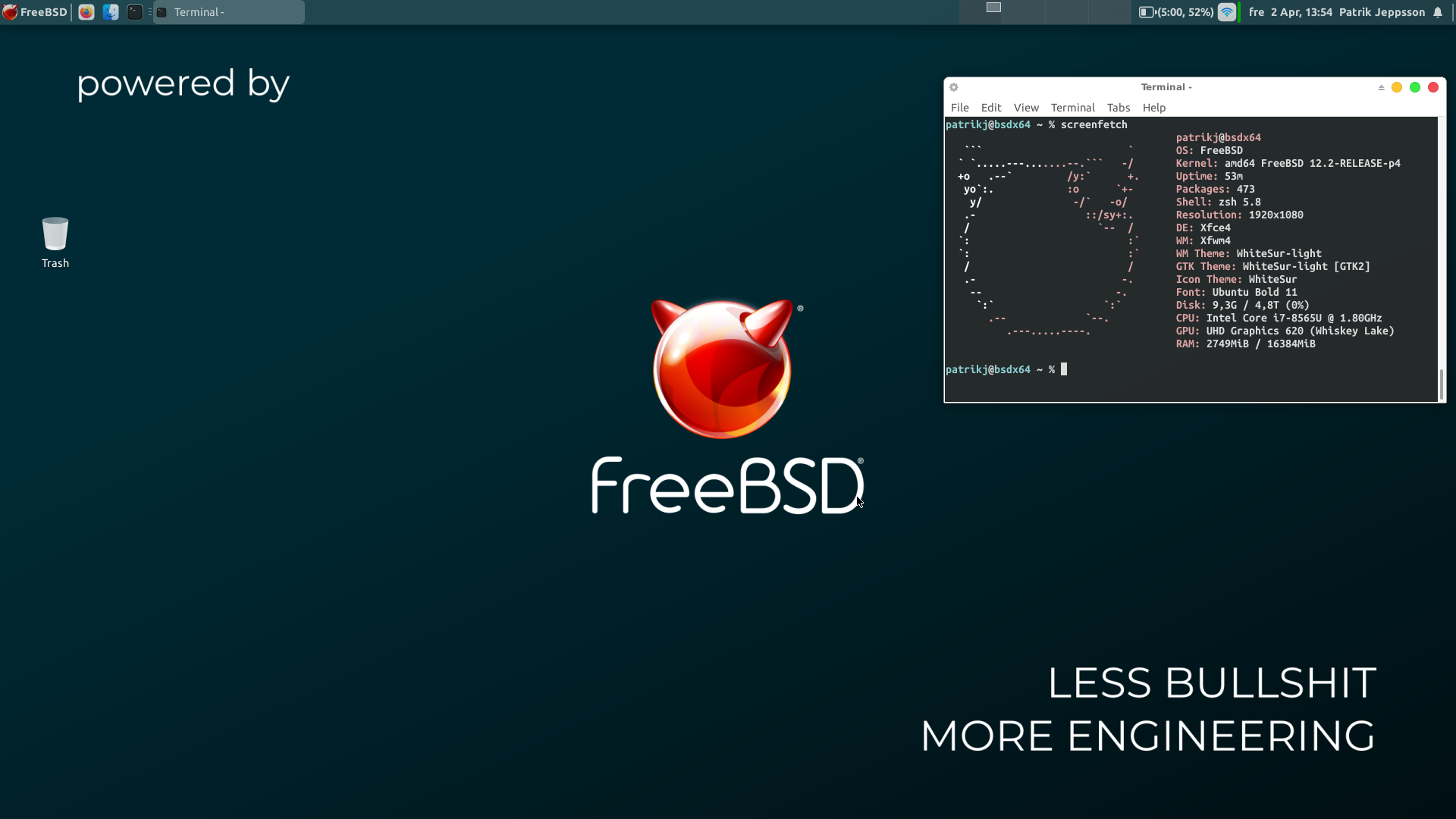 I prefer Xfce and a minimalistic look. Very satisfied with the look of my FreeBSD 12.2 system 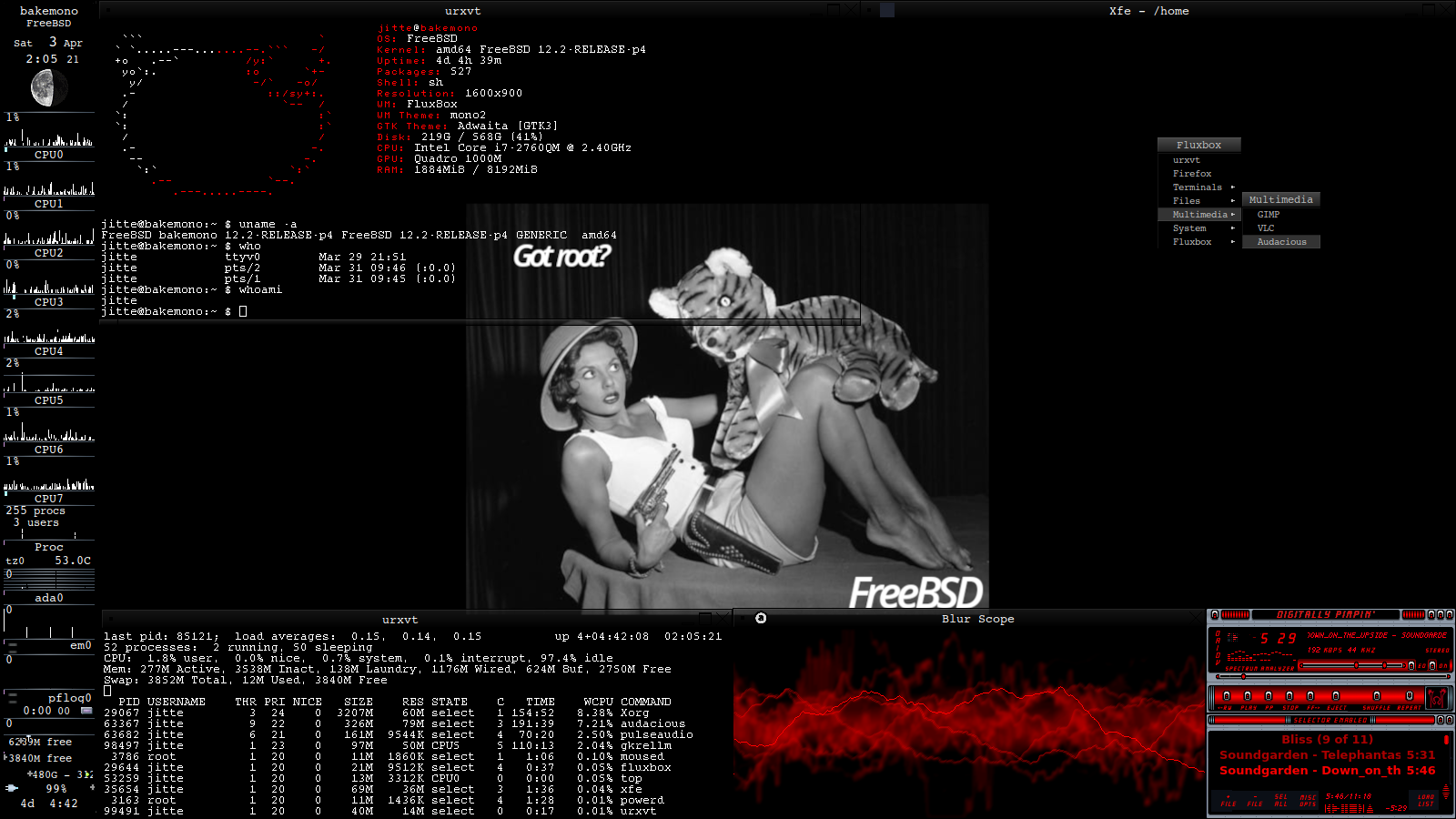