Hello. Can somebody tell me all the places where it is possible to set the path for both root and a standard user.

This is despite my $HOME/.profile containing the following path setting... 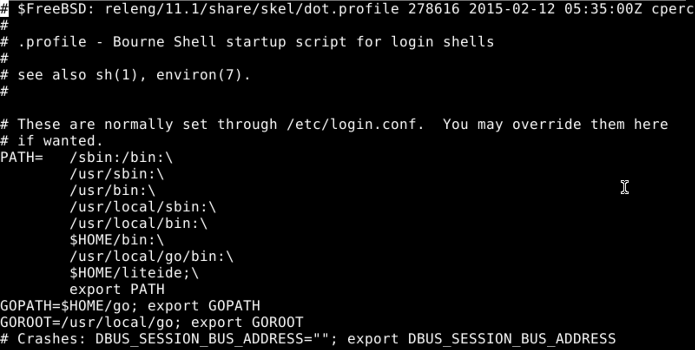 If I then switch to root via the su command, and type $PATH, I see the following...

Note the presence of the /usr/local/go/bin entry. Yet my /root/.profile just consists of this...

What I need are two lists. One labelled "Root" and the other labelled "User". Each containing all the places where the path can be set. I will the take these lists and tattoo them to the inside of my eyelids, thus forcing me to learn them.

Before somebody points it out, I have found https://www.freebsd.org/doc/handbook/boot.html and am reading it now. Hopefully, some of it will sink in!
OP

That didn't help. All I want is that the path for my user account has the additional entry /usr/local/go/bin in it.

Somehow I have managed to add it to the path for root, I suspect via /root/.cshrc.

I've tried adding it to the default section of /etc/login.conf...

But that hasn't worked.

What am I missing here? Please end my misery!

This question already got answered in another thread.
OP

ShelLuser said:
This question already got answered in another thread.
Click to expand...

I applied the idea suggested by scottro after a bit of working out in which particular part of the thread the question had been answered, and created a new $HOME/.bash_profile containing the line source ~/.bashrc. Within source ~/.bashrc I placed the sh format PATH and other export commands.

That didn't work, I'm guessing because if you run source by itself within the user shell, you get source: not found.

So ShelLuser, could you tell me if, in fact, I located the correct part of the other thread, or do I just have to face the fact that I don't have the intellectual chops to deal with this problem.

Alternatively, if anyone else is reading and can offer some useful and relevant help, please feel free to contribute. Thanks!
OP

Don't forget I'm relatively inexperienced using *nix type OS's so please bear that in mind when answering me. I do have about 30 years experience in computer programming so a little bit of respect is always welcome!
OP

ShelLuser It's just occurred to me. Is English not your first language. It's just that in this forum you come across as a little abrupt. Maybe it's a language/cultural difference. Maybe I was being a bit too sensitive. If so, my apologies!
OP

I decided to take the plunge and I changed my default user shell to csh. Now, of course, my modified $HOME/.cshrc comes into play and I have the path just as I wanted.
S

Going back to the earlier mention of creating .bash_profile and .bashrc, the issue would be that you're not running bash. The source command is a bash builtin, not a sh builtin. (Which I didn't know till I saw your post).
I know you've solved your issue in another way already, but figured I should mention that in case it was still confusing.

The sh shell uses $HOME/.profile and $HOME/.shrc. The command to tell .profile to look at .shrc isn't source, it's setting environment. If you look at the end of $HOME/.profile, you will see
ENV=$HOME/.shrc; export ENV which does the same thing as bash's source $HOME/.bashrc.

Completely non-relevant question, I wonder if I'm the only one who sees ENV and reads it as envelope rather than environment. I don't know why, probably an assumption I made when I was first exposed to this stuff.
OP

Thanks for the reply scottro. I'm altering things in incremental stages: I've now upgraded my user shell to tshrc, which allows me some rather nice color options...

It seems that source works with csh and tcsh as well as bash.

It was worth mentioning scottro as all of these disparate bits of information are slowly congealing into what I hope is a coherent whole, as opposed to a black hole!
OP

Today that part of the prompt has vanished entirely..

What's going on, I wonder? Multiple glitches in the Matrix?
OP

Weird! The prompt is back, and is now spelt correctly!!

I've been messing around with the network settings, both in my VM and in Parallels. I must have disturbed something!!

I advise you to try to use shells/zsh.
save this as ~/.zshrc:

ILUXA said:
I advise you to try to use shells/zsh.
Click to expand...

I'm tempted. I'm using zsh on my Apple Mac, along with an @ohmyzsh replacement called Prezto (as the name suggests, it's much faster than @ohmyzsh). In FreeBSD, i've moved from sh, csh, to tcsh. It would be a logical next step to move to zsh, I guess. Are there any known problems with tcsh, as far as you know, and what are the plus points of zsh on FreeBSD?

carlcaulkett said:
what are the plus points of zsh on FreeBSD?
Click to expand...

Cool! Thanks, I didn't see the sample .zshrc until a second ago. I'll give it a go in a moment. What's the best way of installing zsh, using pkg or from ports?

No matter, it should work in both ways.
OP

I'll have to use ports, I forgot that I am battling with an internet connection problem in my FreeBSD guest OS running under Parallels on an Apple Mac!
OP

Which options do you recommend?

Doh! I need a working web connection before I can use ports. The lengthy tale of woe is described at https://forums.freebsd.org/threads/web-failure-after-parallels-change.65231/post-382216 if you're interested!
OP

Good news. I finally got my internet connection working, and the virtual machine is backed up. I was able to install zsh from ports. One small thing, I wasn't able to get either BATCH=yes or even export BATCH=yes to work. So I just went straight to make install clean. I had to press enter with the options dialog but I survived that and the rest was completely painless, and I now have zsh installed on my user account, along with your .zshrc file.

Thanks again! ILUXA, much appreciated!