A FreeBSD box for home

We are many here to ask questions. But few tell what they want to achieve.

I want to share this project involving FreeBSD. My goal was to set up a firewall / router just after my internet box and also use it as a media reader on my TV.

I almost completed the configuration. The main components are operational and under testing for the moment.

The hardware part is composed of a 0 decibel PC including the Asus H170I-PRO motherboard, an i3 7300T and 8 MiB of ram. The machine has to be as silent as possible because it lies near the TV and must be always running. I choose this motherboard because it has two wired network ports and a wifi device. I added two 250 GB ssd for system redundancy (zfs mirror).

The main problem is that FreeBSD doesn't have a functioning driver for the wifi device (QCA6174). One guy is working on porting the linux drivers to FreeBSD but currently it doesn't work with QCA6174 (it works on QCA988X): https://github.com/erikarn/athp

So I used a Debian VM to bring the wifi network to the box. The firewall / router part is powered by a pfSense VM (based on FreeBSD 11.2). Here, I have to passthru two network devices to these VM. For an Intel processor, you need the patch you can find in PR 229852. Without this one, the kernel crashes as soon as you run a bhyve VM with a passthru device. 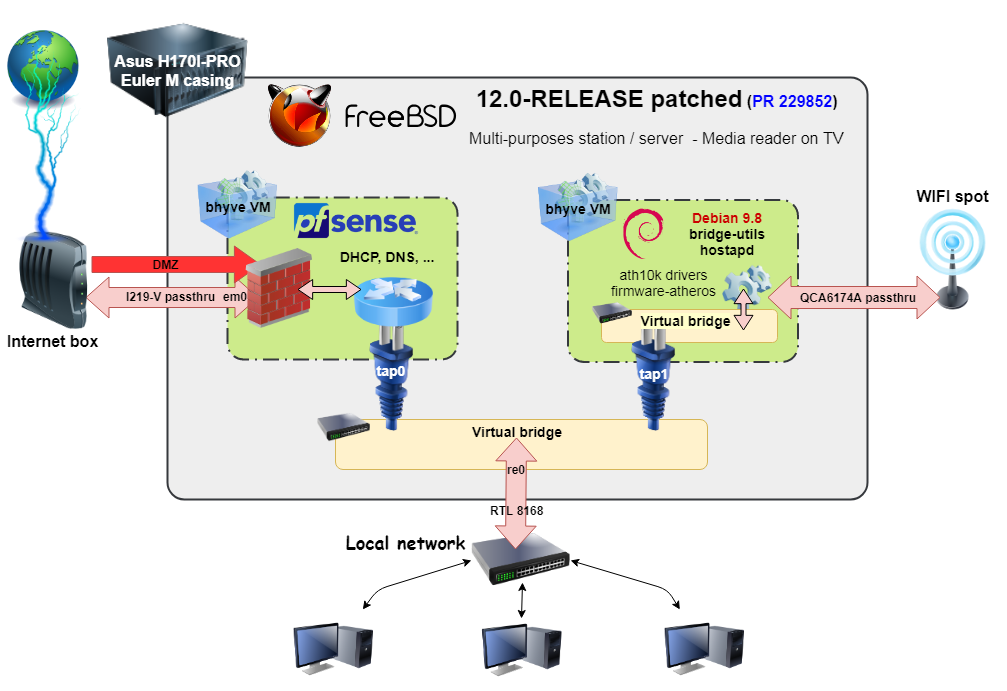 Finally, the harder part is the multimedia one. I'm facing to some minor issues I didn't solve so far.
Last edited: Aug 3, 2019

Good stuff! I like your idea of passing through the wireless device to a Linux VM, probably for better driver support?
R

Would it have been less work to just use a temporary USB wireless device?
OP
E

ralphbsz said:
Would it have been less work to just use a temporary USB wireless device?
Click to expand...

Possible. But I should have looked for a device that is recognised by pfSense and has hotspot creation capability; not sure it's so simple. Furthermore, the idea to buy a wifi device whereas I have already spend money for a brand new one does not please me.

As I said in another post, it's a general method to make network devices work with FreeBSD. The installation of Debian in a bhyve VM is pretty straightforward. The settings of this OS, "howtos" and tutorials are easy to find on internet.

After two weeks in real use, I can say that the network / server part is perfect.

But... The multimedia side is disapointing. No sound in HDMI and video rendering is poor (tearing).
And believe me, I tested a bunch of things trying to mend these problems...

I think I have to wait several years, when drm drivers will work better on this "new" hardware...
R

Emrion said:
After two weeks in real use, I can say that the network / server part is perfect.
Click to expand...

Emrion said:
The multimedia side is disapointing.
Click to expand...

Have you had a look at PLEX, it's in ports, multimedia/plexmediaserver...
OP
E

bjs said:
Have you had a look at PLEX, it's in ports, multimedia/plexmediaserver...
Click to expand...

I have a plex server at home under FreeBSD on another machine. I noticed the tearing when I read it from this FreeBSD Box. I get the same problem with vlc reading local video file.
You must log in or register to reply here.
Share:
Reddit Pinterest Tumblr WhatsApp Email Share Link
Top